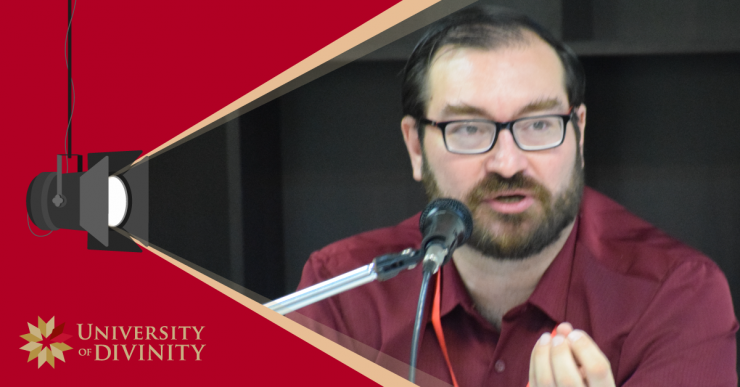 Rev. Dr Eric Trozzo is Honorary Research Associate at the University of Divinity, based at Australian Lutheran College. His research interests include global Lutheranism and philosophical/constructive theology. Currently, he serves as pastor at St. Matthew Lutheran Church in Moorestown, New Jersey, USA, and is formerly a faculty member at Sabah Theological Seminary in Malaysia.

Eric, what is your area of research?

My research engages theology and postdigital theory. Postdigital theory is an interdisciplinary conversation that is still somewhat loosely defined but has coalesced into a recognizable movement over the past five to eight years. It includes educational theory, art theory, and philosophy, among others, to seek cooperative approaches to address the interconnections of digital technologies, ecological devastation, and late stage capitalism and identify alternative paths forward. In 2019 the Croatian scholar Petar Jandrić, an active figure in the movement, decided to reach out to religion scholars to include them in the conversation, as he began to see that religion in an important contributor to envisioning new possibilities. I took up that invitation, and so I work both to identify what Christian theology can offer to the broader postdigital conversation, while at other times seeking to identify how postdigital theory might shape Christian theological reflection.

When Edward Snowden released the trove of documents that unveiled the extent of the use of cybertechnologies for surveillance, I began looking for theological reflections on how digital technologies shape our interaction with the world and with God, but found very little. There was quite a bit written about on-screen material, but not as much about how that integrated with the infrastructures behind the information on the screen. That caused me to try to figure out what I could contribute to making sense of this emerging dimension of life. After I began to publish, some of the postdigital theorist contacted me as they saw my work as intersecting with what they were trying to do. It quickly became a fruitful conversation that quickly evolved into my primary area of research interest.

What do you wish more people understood about digital technologies and faith?

Too often technology is seen as being neutral. Technology is never neutral. It may be ambiguous, but it is never neutral. So much of our day-to-day life is shaped by technologies: the work we can produce, the kinds of relationships we have, even how we think is shaped by the technologies available to us. Our very sense of identity is affected by the technologies available to us. Digital technologies take that reality to a greater level of intensity than any previous form of technology. They are so pervasive and powerful that their impact has introduced far greater changes in a shorter span of time than other forms of technology. These changes are ambiguous; they cannot easily be dismissed as “good” or “bad.”

I think that the pandemic has raised awareness of how digital technologies shape our faith practices and experience of the sacred, just as it has for every other aspect of our lives. Many more people are asking question of where God might be encountered in this digitally-infused reality that we inhabit. My hope is to provide some pathways for talking about a spiritual aspect to the presence of these technologies around us. I particularly hope to help highlight the need to look beyond just what is on the screen, but rather to consider how the deeper structures of that technology connects to a broader sense of the world, particularly in how we relate to the more-than-human world

Who has been an important part of your research journey?

Petar Jandrić’s invitation into the postdigital conversation was certainly a key moment in my research trajectory. Through those conversations, I came into contact with John Reader, an English theologian whose research questions fit more closely with mine than any other theologian I have encountered. He has introduced me to many other European scholars working within the field. Most importantly, I’ve become part of the Ethical Futures Group of the William Temple Foundation that he heads. It is an interdisciplinary group of scholars bringing different perspectives on the intersection of ecology, digital technologies, and religious faith, primarily from a Christian perspective. Before the pandemic, it met in-person and so was entirely a group of scholars based in England, but with the pandemic it shifted to Zoom and so it has allowed me to be part of some wonderful discussions.

Most recently I have been looking into the history of digitization, and how it is related to certain modes of thinking. Digitization is not just about electronic technologies. Its beginnings are quite embodied – the digits of our fingers. Digitization is ultimately the process of breaking down our experiences of the world into smaller and smaller fragments of information. That approach can range from using our fingers to count to breaking huge social trends into tiny bits of data. That kind of dividing and breaking down into tiny bits is ambiguous, like all technology. Through acts like data mining, powerful new insights can be reached, but it also breaks knowledge apart so that connectivity is lost. Within that I am beginning to see the role of theology as taking those fragments of knowledge and re-stitching those fragments together, held in relation with one another in the divine.

So far most of my effort has been on the philosophical framework of postdigitalism and how to construct it in a way that opens a space for theological reflection, since most postdigital theorists are non-religious. That means I keep writing up to the place where theological questions can be asked, but not yet getting to where I can ask those questions or begin to posit answers. I hope to be shifting soon from more of a philosophy of religion approach into theology proper in dialogue with postdigital theory.

Eric recently wrote a chapter entitled, “Provoked by the Divine: The Event of the Postdigital Sublime” for Postdigital Theologies: Technology, Belief, and Practice (edited by Maggi Savin-Baden and John Reader). It is available for pre-order soon.