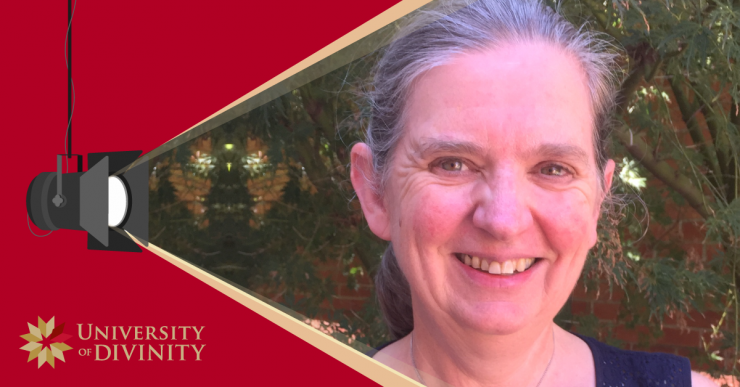 Dr Anne Elvey is Honorary Research Associate at the University of Divinity. She is an alumnus of the Melbourne College of Divinity, graduating with a Bachelor of Theology in 1989, and Master of Theology in 1995. Her research interests include ecological poetics, poetry and/as activism, ecological feminist hermeneutics, the new materialism and the Gospel of Luke, and she has published widely in these areas. Her most recent publication is Reading with Earth: Contributions of the New Materialism to an Ecological Feminist Hermeneutics.

Welcome, Anne! Tell us about your general area of research.

My research lies broadly within the environmental humanities, and has two related trajectories: ecological feminist hermeneutics, often with a focus on the Gospel of Luke; ecological poetry and poetics.

As a teenager in the 1970s, I was taken by Romantic Poets like Wordsworth and their sense of the natural world as animate. In the mid-1980s I was involved with People for Nuclear Disarmament and this developed into a concern about ecological damage caused by humans on a large scale. In the early to mid-1990s, I became a Binnap partner with Aboriginal Catholic Ministry Victoria and had the opportunity to attend retreats in the Barmah Forest which opened my understanding to three interrelated things: a terrible and ongoing history of invasion; Yorta Yorta resistance; and ecological trauma accompanying colonisation. In the 1980s and 90s, I was also involved with feminist thinkers critiquing patriarchy and kyriarchy, both in the churches and the wider world. In my theological studies at Catholic Theological College and United Faculty of Theology, I was drawn both to theology and biblical studies, and my Master of Theology with Melbourne College of Divinity, subsequently focused on the women of the infancy narratives in Luke, in a comparison with Pseudo-Philo’s Biblical Antiquities. When I moved to Monash for a PhD in 1996, initially I was planning a feminist work focusing on the maternal and its forgetting in the Lukan gospel. But my supervisor Kate Rigby was immersed in the very new field of ecological criticism and quickly I came to see that my (admittedly low-key) activist sensibilities could be integrated into scholarly research. My doctoral work then became an ecological feminist reading of the Gospel of Luke, with a focus on the body in pregnancy and its phenomenological status as a material given that was gift-like, unsettling economies of exchange. I have continued in this general research area since then.

This is a difficult question. I hope that my work might contribute in a small way toward a larger change of consciousness and behaviour for those of us enculturated in consumer capitalist cultures of colonisation. For me, this requires an  intentional listening to the people of First Nations and a decentring of settler cultures, including a deepening recognition of ourselves as enmeshed in more-than-human relationships.

What do you wish more people understood about ecology and theology?

That in a context of ongoing invasion, ecological theologians must listen to and respect First Nations.

That to turn toward Earth as a living more-than-human community in which we are enmeshed is not to be feared as if it distracted from ‘real’ theology, but rather welcomed as a basis for scholarship and life more generally.

Congratulations on your upcoming book, Reading with Earth: Contributions of the New Materialism to an Ecological Feminist Hermeneutics. Tell us about what you’re discussing here. 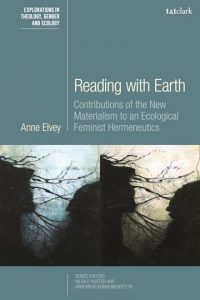 The book brings together and builds on my work over the past fifteen years or so, reaching back to my doctoral work on ecological feminist readings. Reading with Earth offers a non-rigid framework for what I call ‘braided readings’ of selected biblical texts, mostly from the Gospel of Luke. From the reading position of a settler enmeshed in and benefiting from the ongoing invasion of Country, the book addresses twenty-first-century situations of ecological damage, at the intersection of ecological and social justice, in relation to climate change, animal ethics and resistance to the market-driven extraction of ‘natural resources’ (extractivism). My approach is informed by ecological feminism, which analyses intersections between kyriarchal oppressions in the human sphere on the basis of race, gender, class and sexuality, and ecological destruction. It is undergirded by the ‘new materialism’ or ‘material turn’ in philosophy and literary studies, which highlights the foundational importance of matter to our being and doing, and the contribution of a kind of ‘material agency’ to any action or effect. The book brings ecological feminism and new materialism into dialogue to shape a hermeneutics that is sensitive to specific situations: human poverty, road kill, mountaintop removal mining, and the impacts of climate change on weather and on complex ecosystems like the Great Barrier Reef. An e-version of the book has just appeared as part of Bloomsbury Collections.

Many things but here are two:

There is always old learning to undo for me to situate biblical studies in the deep time (including a deep future) of ecological embeddedness and responsibility.

There are researchers currently working collaboratively in other fields (e.g. cultural geography) – First Nations scholars and settler scholars together with Country as a research partner, a model I would hope to see developed in theology and biblical studies, if this is seen as appropriate by Indigenous scholars.

My next project is taking shape around genealogy (specifically an Irish female ancestor and her daughter), colonisation, migration, land and gender, and will likely take the form of narrative poetry. It is in its very early stages.

Anne’s most recent publication, Reading with Earth: Contributions of the New Materialism to an Ecological Feminist Hermeneutics, is available to pre-order.

Recent publications from the University of Divinity research community – 2022