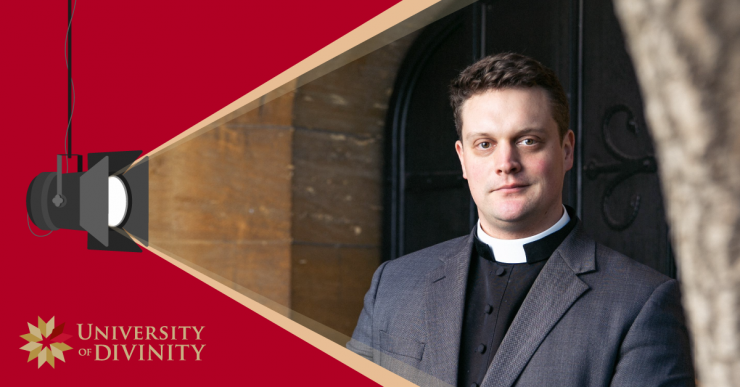 The Reverend Dr Alexander Ross is an Honorary Postdoctoral Associate at the University of Divinity. He is an alumnus of the University, graduating with a Bachelor of Theology in 2009 and Diploma of Ministry in 2011. Alex completed his postgraduate studies in the UK, including a Master of Theology at the University of Oxford and a PhD at Cambridge University. Alex is currently vicar at Saint John’s Finch Street in East Malvern and Saint Agnes’ Glen Huntly, and is an Archbishop’s Examining Chaplain for the Diocese of Melbourne and assists in the delivery of the post-ordination training programme for newly ordained curates. His full biography can be read here.

Alex, tell us about your area of research.

Broadly, my area of research is Anglican ecclesiology – the study of the Anglican church as one stream and particular expression of the One, Holy, Catholic and Apostolic Church. My research has focused largely on international Anglicanism and the nature of its ‘communion’ though the two local contexts I know best from my own work and study has been the Anglican Church of Australia and the Church of England. My doctoral work, which has recently been published, explores one very particular but underdeveloped and often misunderstood aspect of Anglican authority and polity which is the historical development and current place of Archbishops and ecclesiastical Provinces in contrast to the dominance of a ‘national-church’ polity and growing Primatial authority. This speaks to contemporary controversies around how authority is exercised and ordered in Anglicanism and whether some of the seemingly intractable polarities we see might in fact be a symptom of a common but flawed ecclesiological starting point.

I am a ‘cradle Anglican’ and this caused me in my early adulthood to develop an interest in interrogating the assumptions of that identity and to bring into greater clarity its distinctiveness as well as its complexities. I’ve also always had an interest in sources of authority – not just in the Church but in a wider realm – examining the structures and instruments of power present in our world and following them back to the source of their authority.

My interest in international Anglicanism developed through the exposure I had to it in my undergraduate degree at Trinity College which was then part of the United Faculty of Theology at the Melbourne College of Divinity (now University of Divinity) which led me to pursue graduate study in the field at the University of Oxford, where I explored various outworkings of the ministry of the Anglican Communion Office and began to sketch two competing narratives of Anglican polity: ‘naked Autonomy’ (to borrow Robert Runcie’s phrase) and ‘clothed Communion’.

It was this work that I took forward at the University of Cambridge under the supervision of former Archbishop of Canterbury, Rowan Williams.

What do you wish more people understood about Anglican ecclesiology?

Firstly, that it is varied. When I went to Oxford I often heard it stated by English ordinands that they assumed Australian bishops were appointed directly by the Archbishop of Canterbury! There is a huge variety of polities and practices across the Anglican Communion occasioned by theology, history, geography, wider-politics and even happenstance.

Secondly, that it is contested and evolving. Too often lazy tropes are trotted out (don’t get me started on the ‘three-legged-stool’ of Scripture, Reason and Tradition!) which deserve scrutiny and analysis. Anglican ecclesiology has seen dramatic shifts and revolutions in polity and this continues – we should engage with this contest of ecclesial ideas and not rest on historical half-truths.

Thirdly, that it matters. Serious theological reflection on Anglicanism and the nature of our Communion is not just ecclesiological ‘navel gazing’. It speaks to who we are as Christ’s body and how we function as one body and, ultimately, how we might recognise, and be reconciled with, other Christians (and, indeed, other Anglicans) so that we may truly inhabit Christ’s call that ‘we may be one’. It matters because the Church is not just ‘a boat to fish from’ in proclaiming the coming Kingdom of God, but is itself that ‘ship of fools’ that will bear us into that new future – it has salvific significance.

Who has been an important part of your research journey?

During my undergraduate degree in theology at the University of Divinity, the ecumenical environment of the United Faculty of Theology and particularly the teaching of Ross Fishburn (Anglican Identity and Ecclesiology), Dorothy Lee (Biblical Studies), Robin Koning SJ (Systematics) and Chris Mostert (Systematics and Sacramental Theology).

At the University of Oxford I was supervised and influenced by Martyn Percy, and greatly encouraged by New Zealand-born Contextual Theologian Cathy Ross (no relation!) and also Mark Chapman. I was also taught by Graham Ward, who examined my dissertation for the Master of Theology.

At the University of Cambridge it was of course Rowan Williams who had the greatest influence, but I was also fortunate to be part of a college, Emmanuel, which has made a perhaps disproportionate contribution through its history to fostering cutting-edge theology with a number of significant theological movements and schools emerging or being led from amongst the Fellowship, not least the current field of ‘Radical Orthodoxy’ also dubbed the ‘Cambridge School’.

Conservatively, I would hope it leads to a richer and fuller understanding of the complexities and challenges of Anglican ecclesiology. Better yet, I hope it might provoke some more creative and radical re-thinking of that ecclesiology and interrogation of some of our old assumptions. More than anything, though, I hope it will open up new conversations and avenues of enquiry that may lead us deeper into that unity to which Christ calls us.

I have learned many facts and figures, which I am already starting to forget.

I have learned that to write a doctorate within three years you must ‘write early, and write often.’

I have learned – to paraphrase the 90s movie ‘Cool Runnings’ – that if you’re not enough without a PhD, you’ll never be enough with one.

Perhaps the most important and intriguing conclusion to emerge from my doctoral work was that current controversies in international Anglicanism over authority and polity arise not from opposing visions of the Church – or opposing ecclesiologies – but from a common “flattened ecclesiology” which has dominated since the second half of the Twentieth Century. A remedy to this necessarily involves a dramatic paradigm-shift in our ecclesiology – to which a recovery of an authentic ‘provincial polity’ was just one answer proposed through my doctoral research.

Next I hope to develop this identification of a “flattened ecclesiology” and open up its alternative while also attempting to more explicitly identify and position my research within the theological ‘Cambridge School’ of thought that has informed it.

I have begun to do this a little in dialogue with the Gospel of John for a recent chapter contributed to a Faculty publication being prepared by Trinity College and to be published by Wipf & Stock, and am considering how it might be expanded and developed into a more substantial piece of research.