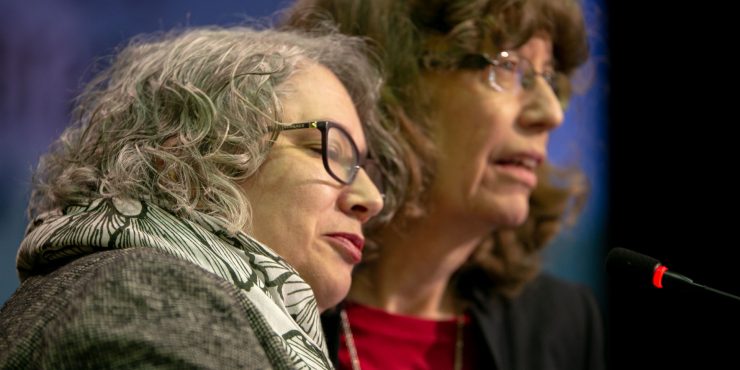 Congratulations to Reverend Sharon Hollis; announced as the Uniting Church in Australia President-elect at the 15th Assembly on Thursday morning, 12 July 2018.

An alumnus of the University of Divinity, Reverend Hollis, who is Moderator of the Synod of Victoria and Tasmania, will be the third woman to be National Assembly President and first who has been ordained.

The announcement was met with a standing ovation in the Box Hill Town Hall.

About the appointment, the Vice-Chancellor, Professor Peter Sherlock said:

“Reverend Sharon Hollis is an outstanding graduate of the University who exemplifies our graduate attributes. As Moderator, Sharon is a wonderful colleague and presented a stirring address to graduates at our 2016 Melbourne graduation ceremony.

On behalf of the University, I congratulate Sharon on her appointment and assure her of our prayers”.

Responding to the announcement at the Assembly, Reverend Hollis thanked the two Congregations that she served for teaching her how to be “a pastor, a priest and a teacher” and expressed how the Uniting Church had been the place that comforted, welcomed and pressed her into exercising discipleship.

An emotional Reverend Hollis, whose husband took his own life in 2014, teared up when she said that for some days in the past five years the only thing that got her out of bed was the faithfulness of God.

“The Spirit of God does indeed journey through death’s valley and renew hope.”

She thanked the Synod of Victoria and Tasmania “who called me to be Moderator when my life was so broken”. Reverend Hollis gave special thanks to her two daughters who she said had encouraged her to put her name forward despite knowing that “they would bear the costs of this role the most”.

President Dr Deidre Palmer hugged Reverend Hollis and gave a prayer of thanks for her.

Reverend Hollis will begin her term as President at the 16th Assembly in Queensland in 2021.

The content of this article is drawn from Uniting.Church