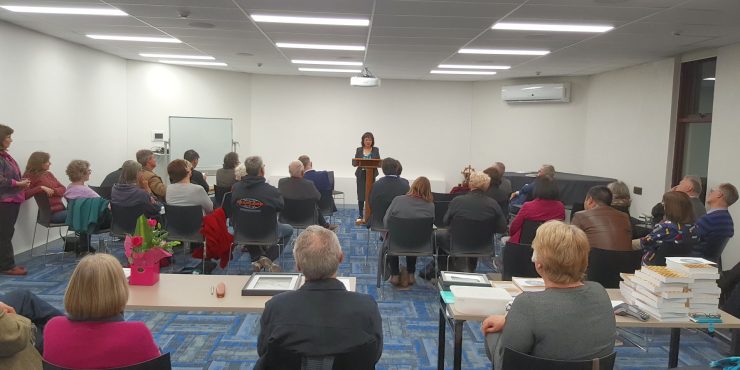 A book launch hosted by Whitley College on Thursday 30 August featured poetry in Chinese and English. Written by the subject of the book it was read by co-supervisor Dr Ji Zhang. The author, Xiaoli Yang, also read some of her own poetry. Dr Yang is an adjunct faculty member of Whitley College and a doctoral graduate of the University of Divinity.

Associate Professor Frank Rees, a co-supervisor of the PhD, also began his speech with poetry, saying:

It is just short of 200 years since John Keats wrote his wonderful ‘Ode on a Grecian Urn’, which culminates in those fabulous lines:

That is all ye know on earth,

And all ye need to know.

With these lines, he set before us a pathway by which we might, in fact, break the straight-jacket of Kant’s epistemology, and the whole modern project, which separated and indeed prioritised truth, then goodness and finally beauty—a somewhat optional extra, for those of such disposition.

Theology, for its part, spent most of that century and the next caught in these structures, constantly seeking to justify its place in the world and the university—and facing the rising tides of secularity.

Then came a voice in the wilderness, such as Paulus Tillich, daring to speak of a theology of culture, naming the religious meaning of all aspects of life, and insisting that these two things, religion and culture, eternally belong together no matter how much the modern project seeks to drive them apart.

It was not until the 1960s and 70s that followers of Tillich sought to develop what they called theopoetics—a project for an aesthetic revitalization of Christianity in response to secularism.

But the critical question with this project was whether it offered some kind of triumphant overcoming of secularity, a post-secularity which claimed, as was said of Tillich, to understand the world better than it understood itself, and thus explained to poets and painters and novelists that the things you are writing about, the visions and emotions you are striving for, are the things we have known about and understood all along, in our religion. Your beauty is really our truth.

This kind of claim has been, in these latter days, associated with the radical orthodoxy cadre, and also attributed to several Popes.

Xiaoli Yang has known the anguish of her own generation of Chinese people, living in the aftermath of the most secularising regime the world has known, and yearning for meaning, for some food for the human spirit, some reality amidst the constantly shifting tides of history—a culture which knows beauty, values poetry and dance, and community life around the table.

But the problem is, as evidenced in the life of the young poet Haizi, the home place where the communal table of belonging used to be set is now a freeway; a massive housing block has replaced the village square, and many of the glorious centres of the ancient culture have become shopping malls.

The search for home, for meaning, truth and beauty, is so powerfully evident in this poet and his work—and Xiaoli has felt it, known it, and for our sakes translated it, to give this part of the conversation its own voice:—and then she has introduced to the conversation her own voice, first drawing from the Gospel of Luke, and the story of Jesus, also homeless, questing for a community of belonging, seeking a community who will sit at table with him and receive the gifts of life, love, belonging.

This wonderful evangelical conversation is the substance of her marvellous doctoral thesis, but in this book she has done more: she offers some of her own poetry, and further theological reflections, again inviting us to go beyond this secularist duality, into a new kind of humble post-secularity, a beautiful kind of truthfulness, a table conversation of life together in the inviting presence of God.

I warmly commend this book to you and congratulate Xiaoli upon its publication. 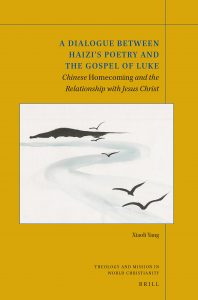 Xiaoli Yang, A Dialogue between Haizi’s Poetry and the Gospel of Luke: Chinese Homecoming and the Relationship with Jesus Christ (Leiden, Brill: 2018)

Christ through Luke’s testimony. It creates a unique contextual poetic lens that appreciates a generation of the Chinese homecoming journey through Haizi’s poetry, and explores its relationship with Jesus Christ. As the dialogical journey, it names four stages of homecoming—roots, vision, journey and arrival. By taking an interdisciplinary approach—literary study, inter-cultural dialogue and comparative theology, Xiaoli Yang convincingly demonstrates that the common language between the poet Haizi and the Lukan Jesus provides a crucial and rich source of data for an ongoing table conversation between culture and faith.