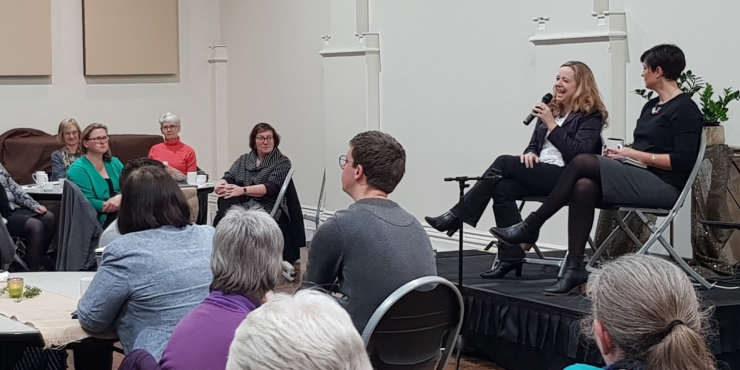 Phoebe: A Story with Paula Gooder

In writing someone else’s story I found my own voice.

On the morning of Friday 2 August 2019, the Australian Collaborators in Feminist Theologies were very pleased to host Paula Gooder, one of the UK’s foremost New Testament scholars and first female Canon Chancellor of St Paul’s Cathedral (London) at a Meet the Author and Q&A event with more than 50 attending and selling out of available copies.

In writing this novel, Paula engages imaginatively the life of Phoebe in a way that is deeply grounded in rigorous study of academic and biblical texts and pieces together the shape of the life of a first century woman’s experience of conversion to Christianity.

What does it feel like to convert to Christianity and eat with Gentiles which would make you unclean, how does that feel in your body? Have your family converted or are there purity rituals to undertake before you can move between these spaces of engagement? What are the social implications of the choices Phoebe made?

“I think there is something about imagination which gives you access into theological things that you can’t get if you just function in terms of concept.  The first thing is that imagination opens up a world for you, which allows you to engage in a different kind of way, which brings out different elements of truth.   The other challenge that we face, particularly in Pauline areas is that the memory of how we engage has had so many layers. For instance, I think the Paul that Luther was talking about was actually no more “Paul” than the Paul I’m talking about, because Luther’s Paul looked remarkably like Luther… we do that.

Paula invites us to ‘restore’ (re-story) the text accurately. Jesus spoke in parables all the time.  To Re-story characters of the bible in this way allows us to restore, imaginatively, the context in which Phoebe lived.

“That question of memory becomes really interesting, in that it’s memory as mediated through my vision and then you get that whole question of actually: where do you find that truth.  Also, pulling on a feminist roots reading, and against the grain of memory, I could say actually what we’ve inherited is a whole load of memories – some of which I want to accept and some of which I want to resist against the grain because they are memories that have been shaped by a singular way of thinking.  Who’s voices aren’t we hearing?

In writing someone else’s story I found my own voice.”

It is easy for feminists to denounce Paul’s authority on the basis of his line against women being able to teach men (1 Timothy 2:11-12), but this stance accepts an exegesis made from one text rather than looking at all the women mentioned and roles they played in Pauline communities. Paula invites us to start with them and then consider what other text might mean. Paula invites us to start with Phoebe:

“I commend to you our sister Phoebe, a deacon of the church in Cenchreae.  I ask you to receive her in the Lord in a way worthy of his people and to give her any help she may need from you, for she has been the benefactor of many people, including me.” (Rom 16:1-2)

Copies of “Phoebe: A Story” can be ordered through St Peter’s Bookroom.  More photos from the day are available here.

Readers have been finding depictions of Phoebe in stained glass all over the UK and sending them through to Paula – if you find one in Melbourne, send it on for her collection!

A leading voice for feminist theological scholarship and a hospitable hub for engagement with feminist approaches within Australia and the region.

The Australian Collaborators in Feminist Theologies network aims to consolidate and energise the University’s commitment to the participation of women and feminist scholars in the academy and the wider church. By fostering and forwarding feminist voice and vision we aim to promote Gospel justice by addressing issues relating to gender equality, class, race, sexuality, and ability.

A tapestry of woven threads: A lecture in honour of Dr Janette Gray

Women of the New Testament show us God’s inclusive plan

Shoulder to shoulder in feminist theologies