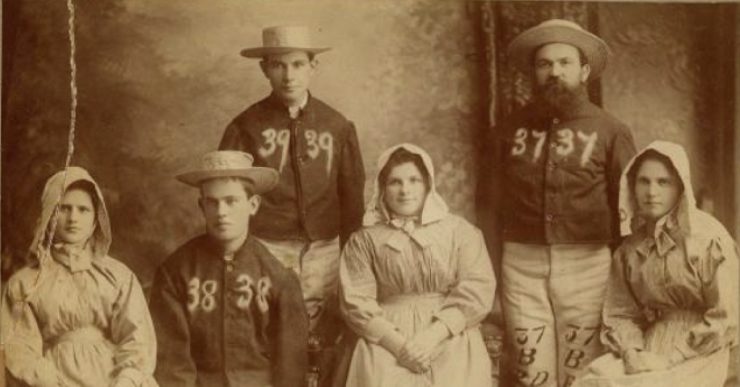 Women preachers: What to wear?

Kerrie Handasyde explores how dress played an important role in perceptions of the religious identity and authority of the first women preachers in Australia. This post is based on an article that appears in the 2020 issue of Lilith, available now on open access here.

This article is republished from the Australian Women’s History Network.

What to wear was an important question for early women preachers, but it wasn’t all about fashion. Clothes symbolised a woman’s moral and spiritual standing in religious communities. The protocols for what to wear in the pulpit assumed the preacher was a man. Early women preachers often sewed their own outfits, literally crafting a new identity for themselves.

In my article in Lilith 26 (2020),“Religious Dress and the Making of Women Preachers in Australia, 1880-1934”, I look at what early women preachers wore in three different churches. Dress styles varied hugely, depending on the church denomination, and they didn’t always conform to wider social expectations around received notions of femininity. Dressing with religious authority might mean a jacket and tie, a starched collar and cuffs, or even prison clothes.

Violet Callanan was the first woman minister in Churches of Christ in Australia. The denomination allowed individual congregations to appoint their own ministers. In 1931, when the 36 members of the Church of Christ at Hawthorne, Queensland, could not attract a minister they quietly engaged the services of a young woman who had recently graduated with a Foreign Missions Certificate. The denomination disapproved of clerical robes―its all-male ministry wore suits and ties―so if Callanan was to dress like a preacher, she had to dress like a man in ‘Sunday best’. There are no reports of what she wore in the pulpit but, in annual college class photographs where the women wore dresses, blouses and bows, Violet Callanan wears a blazer, shirt and tie.

The Presbyterian Church in Victoria valued genteel restraint. When it established its order of deaconesses in the late 1800s, aspiring women required a letter of recommendation from ‘a lady’. Their uniform was a blue dress with white collar and cuffs: patriotic colours for a church that still had strong ties to Scotland. The ‘Blue Ladies’, as they came to be known, were asked to preach when a church was without a minister, but most of their work was in ministry to the poor and sick. Their dresses set them apart from the people they laboured to help. Recruitment adverts in the 1930s describe the deaconesses going into factories, courts, and ‘big State schools… escorted in by dirty little children, their spotless cuffs smeared by hot, loving hands’. Their uniforms also set them apart from ordained (male) Presbyterian ministers in clerical collars. Even in 1952, when an ‘acute shortage of clergy’ meant that Hilda Wilson was ‘set apart’ to fulfil all the duties of a minister for the congregation at St Andrews, Queenstown, Tasmania, she wore her respectable, subordinate, blue dress.

The military-style uniforms of women in The Salvation Army helped expand the definition of evangelical femininity. Long before women could become soldiers in the regular army, they could become Salvation Army lieutenants and captains, and join the ‘fight’ for souls by donning a uniform and preaching in the streets. In 1881 Captain Adelaide Sutherland was profiled in the Christian Colonist:

Far from manifesting a want of feminine feeling, there was a real charm about all her daring, yet she was ever ready for a charge straight over hedge or ditch …[or] the seats of the Hall of Varieties at Newcastle to seize some penitent, but hesitating ruffian by the head or neck, and lead him out to the penitent form for salvation.

Dressed in military-style uniforms, women such as Adelaide Sutherland were transformed and authorised to act with muscularity and ‘daring’.

The most daring Salvationist women preached in the streets in defiance of local by-laws that were designed to stop them shouting and singing their message to publicans and their customers. In Ballarat, 1891, women Salvation Army officers were arrested for street preaching. They were tried and convicted and, when they refused to pay fines, they were imprisoned in the notorious Ballarat Gaol. Prison authoritiesmade the Salvationists remove their uniforms, hoping that in losing their uniforms, they’d lose their resolve. But the prison clothes they were forced to wear proved an even greater expression of commitment to their cause. For the Salvationists, there could be no higher honour than to be like Jesus: stripped and humbled as a prisoner of the State for the crime of preaching God’s Word. The Salvation Army took photographs of the women and men in prison garb: they knew their clothes would attract publicity to the cause.

The photographs look highly staged, but early women’s preaching was always a performative act, in which gendered identity, and religious authority, was styled and ritualised. Women preachers were watched as much as they were heard, and their clothing made a difference to how they were received. In churches where the visual culture was restrained, opportunities for women preachers were limited. But in The Salvation Army, where the transformative role of dress and the performative nature of preaching were valued and understood, early women preachers found great opportunities.

Dr Kerrie Handasyde lectures in history at the University of Divinity, Melbourne, and is a committee member of the Australian Collaborators in Feminist Theologiesand the Religious History Association. She is currently preparing a monograph, God in the Landscape: Studies in the Literary History of Australian Protestant Dissent (Bloomsbury), and an edited volume, with Cathryn McKinney and Rebekah Pryor, Contemporary Feminist Theologies: Power, Authority, Love (Routledge)