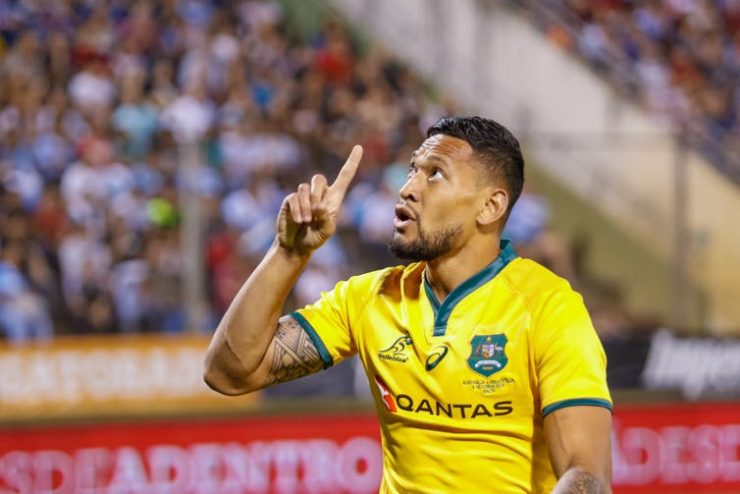 For many Christians, Israel Folau has become the talisman in the fight for religious freedom.

This week, some Australian Christians rallied behind Folau’s legal battle against Rugby Australia, stepping in when the rugby star’s GoFundMe campaign was shut down. On its first day, the new campaign raised more than A$1 million in donations – and counting.

Some Christian leaders have urged the newly re-elected Coalition government to make religious freedom protections a priority in the wake of Folau’s sacking by Rugby Australia.

There’s even been talk among some conservative Coalition MPs of pushing for a “Folau Law”, or a new statute that would exempt religious beliefs from employment contracts.

The debate is a perfect storm of race, religion, sport, politics, sex, law and rights. But for me, neither Folau himself, nor his personal faith, are the issue.

Certainly, I find his use and interpretation of the Bible cavalier and uninformed, disturbingly indifferent to its impact, and strikingly incurious.

But beyond those issues, the question that warrants exploration is why he has so galvanised portions of the Christian community around him.

For many, it doesn’t seem to matter how he’s used or interpreted the Bible. They support him because he’s upheld traditional Christian teaching and been prepared to take a stand on it.


But there seems to be another reason behind much of the support. As some Christians see it, Folau is holding the line against the dominant beliefs in contemporary Western culture on the flashpoints of gender and sexuality. And for this, some Christians especially honour him.

The question remains, though – why have these issues, and not others, have become flashpoints? There are other equally provocative biblical teachings that don’t generate the same passions among Christians.

Imagine if a high-profile Christian sportsman, for instance, tweeted Jesus’ teachings about how difficult it will be for the rich to enter the kingdom of God (especially if it was paraphrased as “Hell awaits you”).

In this scenario, it is very easy to imagine a less fraught response from many Christians. Instead of wholeheartedly backing his stand against wealth, the athlete’s Christian supporters might demur on the issue, saying how the teachings on wealth need to be “interpreted” in their context.

Some Christians don’t feel the need to similarly interpret biblical references to sexuality and gender. Their meaning is taken as straightforward.

As always, sex, like money, does strange things to theology.

Shifting the line in the sand

As Simon Smart has argued, the changing cultural mores around questions of sex, gender and sexuality are at the centre of the debate over Folau’s social media posts and the reaction among Christians to his sacking.

These new cultural mores are posing significant legal, doctrinal, and ethical challenges to Christian churches. For many, the identity of Christianity is at stake. The traditional line on sexuality and gender must be held – so it is said.


But not all Christians see it that way. The line is not so sharply defined.

There are many other Christians who find it hard to understand how traditional teachings on sexuality and gender have been elevated to such a prominent place within some strands of Christianity.

That’s not to say that these Christians automatically disregard the theological arguments for traditional stances on these issues. For instance, Christian proponents of same-sex marriage can accept there are carefully worked-out arguments against it, even if they are unpersuaded by them.

The puzzle, to many, is how these issues have become so definitive to Christian thinking. For these Christians, there’s also a deep disquiet that sexuality and gender are being held up as a test case for religious freedom in Australia.

Time for a more nuanced debate

Even apart from the churches’ involvement in the child sexual abuse scandals, the public’s perception of Christianity has been deeply affected by the church’s frequently moralistic stance on sexuality. This often obscures the other important themes of Christianity – love, hope and compassion as they are embodied in the example of Jesus.

A 2017 McCrindle survey found that the church’s objection to homosexuality was the biggest obstacle preventing people from becoming more religious in Australia, much more so than the role of women in Christianity and the debate over science and evolution.

It’s worth comparing the current angst over sexuality with the long-running debate in the church over science and evolution.

There was a similar line-in-the-sand reaction (and there still is) by some Christians to the theory of evolution. But the willingness of many Christians to navigate that debate with care and informed theological reflection has produced deeper understandings of Christianity, especially its doctrine of creation.

Read more:
Is there a place for religion in the science classroom?


So why hasn’t the same thing happened in the debate over sex, gender and sexuality?

For one, the fault lines around these issues within Christianity are complex. There aren’t simple divisions between “conservative” and “progressive” versions of Christianity, or between those who read the bible “literally” and those who read it “metaphorically.”

There are deeper underlying differences between Christians over the extent to which Christianity can be open to exploring new forms of itself while staying true to its founding message. Recognising this would involve a serious discussion of the diverse theological meanings of tradition, culture and ethics.

But if we’re able to have this deeper discussion within Christianity, it could affect how we view those “lines in the sand” between the church and broader society – and whether religious freedoms are truly at stake. And the world at large might get better insights into the breadth of contemporary Christianity.