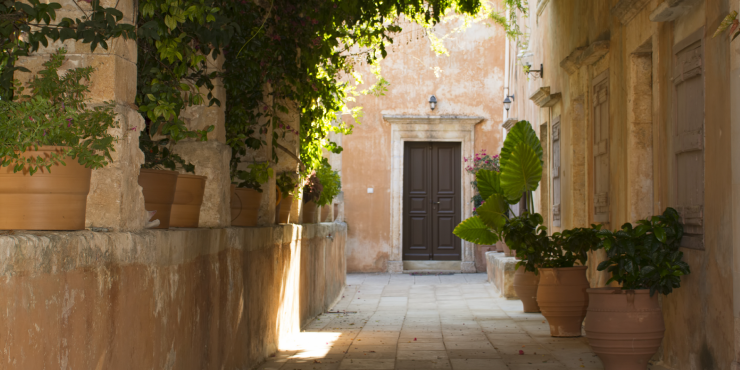 Monastic rules of our lives: the inner cell and the secret place

The ‘cell’, to the secular world, is more than often portrayed as a place of detention; a room for those deemed guilty of the most heinous crimes; a home to murderers, thieves, and all sorts of unlawful offenders; even possibly as a space for the outcasts of society.

I’d like to offer a different perspective to the concept of a cell, ‘theologising’ it as a place of holy warfare for spiritual development; self-examination leading to individual transformation; and finally, a dwelling place uniting what is divine to what is human, by reflecting over the a fragmentary work of a 4th century Coptic ascetic, Paul of Tamma (circa 4-5th c.).

The text I have used to guide my reflection comes from two books:

Paul of Tamma is a well-recognised ascetic saint in the Coptic Church, partly because he is commemorated in several parts of the churches liturgical services including the non-Eucharistic services. His relics have been preserved alongside his monk-friend, Pshoi at the monastery of St Pshoi in wilderness of Scetis, Wadi al-Natrun, as recorded in Arabic vita of Pshoi attributed to John the Dwarf (✞405). Out of the several Middle-Egyptian monastics, Paul of Tamma is the only one known whose works still survive (other than the accounts of their lives). His work On the Cell (OC), survives in fragmentary pieces and itself incomplete. About this work, Professor Tim Vivian said, “If the Christian canon had remained open on into the 4th and 5th centuries, On the Cell could easily, and justifiably, have become part of the Church’s wisdom literature, along with Proverbs, Ecclesiastes, The Song of Songs, Sirach and the Wisdom of Solomon.” (Words to live by, pp. 147).

In reading the Gospel, one can notice the importance of a ‘secret place’ for protection and for spiritual growth. Jonathan had warned David to stay in a secret place to protect himself from Saul (1 Sam 19:2). Throughout the Psalms, God speaks and answers prayers in times of tribulation (Ps 81:7) and protects his children who seek His refuge (Ps 91). It is in the secret place that one may come to the knowledge of God (Isai 65:4). Even Christ taught us to go into our room and pray secretly – “the Father who sees in secret will reward you” (Matt 6:6). To the early Egyptian monastics, this ‘secret place’ was their cell. A place of solitude, stillness and silence. It was considered dangerous for monks to leave their cell for fear that their inner peace be disrupted. Antony the Great (✞356), the father of the monastic movement, taught, “Just as fish die if they stay too long out of the water, so the monk who loiters outside his cell…” (Apophthegmata Patrum, Antony the Great. 10). Till today, monks spend time in their cells, sometimes days or weeks at a time. Most Coptic monasteries close their doors from visitors during certain seasons of the church, such as in the fasting periods of Great Lent and Pascha Week. It allows the monks to spend longer periods of time in their cells to read, reflect and pray.

The text of On the Cell speaks about a monk’s physical dwelling, and what manner they should conduct themselves in their cells. For Paul of Tamma, the cell challenges a monk’s wisdom (OC, 36, 37), drawing him into complete union with God (OC, 47, 48) so that the glory of God appears to him there (OC, 55). Like psalm 81 (mentioned above), Paul also sees the cell as the place where God speaks and forgives – a dwelling for life-long repentance (OC, 70-74). One can draw from this text an allusion toward an inner cell, or a ‘cell within’. In the opening sentence of the text, he states, “…be wise and remain in your dwelling, which is your delight, and your cell will remain with you in your heart…” (OC, 1).

In it, one will find God (OC, 13). He further employs the Socratic emphasis ‘know thyself’ or even the biblical ‘go to yourself’ – (לֶךְ־לְךָ֛) spoken by God to Abram, by saying, “humbly flee to yourself in humble knowledge” (OC, 18) and even his concluding remark, “so, therefore, flee to yourself alone.” (OC, 116). Interestingly enough, the Arabic etymology of the word (الراهب), also means the one who flees. Monks therefore, flee toward their cells, building themselves up by being in complete confrontation with only themselves. They battle with their inner thoughts, in order to purify and cleanse their minds and hearts, preparing within them a cell worthy of accommodating God. In the monastic realm, it’s known as the spiritual warfare/struggle (الجهاد الروحية).

The cell is like the kingdom within; the temple that houses God is the monk’s heart. It is not something that comes with observation, as though something we wait for, but the kingdom of heaven is already within and it is now (Luke 17:20-21). Such is the cell within us. This can also be extrapolated from Paul’s emphasis for a monk to “lower [their] eyes to the image of God, like these sheep” (OC, 24). Rather than raising their eyes to heaven, monks under Paul were instructed to lower it, since Christ’s heaven was within them, and the image of God was incarnate uniting the eternity of heaven and the temporality of earth together. He reiterates this, saying, “place your thought downward, believing that there is a purpose for the image of God” (OC, 64). A monk’s focus was total union with God and the eternal kingdom. The inner cell joins them together; transforming the inner person into a place of both God’s indwelling within them, as well as the promise of eternal life.

Paul regularly paints the cell as a treasure (lit. honour), and “its mysteries are without number” (OC, 89). An observable parallel between the Gospel’s “treasure in heaven” (Matt 6:20; Mark 10:21; Luke 12:33 & 18:22) and the gifts of the cell that will remain forever (OC, 85) further reiterates this. A person’s inner cell becomes “the dwelling place of virtues and the spirit is perfected in him.” (OC, 76). They journey with God in prayer and reflection, continually in self-examination to better themselves in all aspects of their lives. Paul affirms this by saying, “You shall test the teaching that you follow, walking alone with God at your side.” (OC, 81). The inner cell is then a gift Christians must struggle for. It does not come easy, but out of it, comes, holy wisdom and divine unity. He continues, “Now then, fight bravely for you dwelling for it is what will remain with you” (OC, 84), and it becomes a rewarded honour and a crown for those who fight for it (OC, 106).

The struggles confronting those living in the cell are in fact their own weaknesses. Paul states, “You know your weakness…to the cell for you!” (OC, 65). The cell does not change to gratify our weakness, like the church does not change for our suitability. Instead, monks entered into the cell to transform their lives, and we enter into the church to better ourselves. The aim is to transform the inner human into a new human in Christ, and cloaking ourselves with a new nature (Eph 4:24); becoming partakers in Gods promise (Eph 3:6); of grace (Phil 1:7); of the Holy Spirit (Heb 6:4); and finally, partakers of the divine nature (2 Peter 1:4). It certainly is a difficult journey. For Paul, the objective of the cell is definite for the seeker: “you will find God in your cell” (OC, 13); “you will know God in your cell” (OC, 34); and that “[our] mind becomes conformed to God…” (OC, 93) – seek, know, unite.

The cell is a very applicable concept in the lives of all Christians, and not only monks. Many people today travel to Egypt to meet these monks and ascetics. Fr Lazarus el-Antony, an Australian and ex-atheist, became a hermit-monk now living in the mountains of St Antony’s monastery at the Red Sea, Egypt. He advised a group of pilgrims to spend a short amount of time in their rooms in reflection and prayer daily. They were to read the Gospel and recite the Jesus Prayer before they sleep. His instruction seemed simple, but since the group of pilgrims often surrounded themselves in the company of others, they found it very hard to contemplate alone for longer than 20 minutes – they got bored very quickly! Fr Lazarus el-Antony believed that Christianity was never meant to be easy, but in order to change and transform ourselves, we needed to work hard to really learn how to contemplate God.  I believe him.

For many Christians, the inner cell can be the secret place the Lord Jesus taught his disciples to pray in. It is our own prayer room. That holy place where one can come to meet and talk to God. The cell where we can examine ourselves, allowing God to search our hearts and minds in order to struggle toward holiness and become holiness to the world around us. A Coptic spiritual father, after the eucharistic liturgy, once said, “You have now become a church, carrying the Body and Blood of Jesus. Now, leave, go be a church to the world!”.

Here is one excerpt I thought to conclude with: