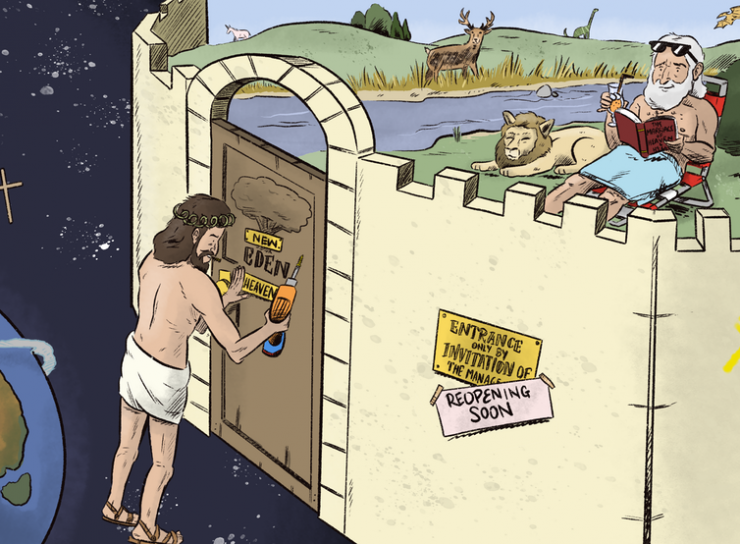 What and where is heaven? The answers are at the heart of the Easter story

This is the second in a two-part series on heaven and hell by Bible scholar Robyn Whitaker. You can read her piece on hell here.

My pious Baptist grandmother once shockingly confessed, at the ripe old age of 93, that she didn’t want to go to heaven. “Why,” we asked? “Well, I think it will be rather boring just sitting around on clouds and singing hymns all day” she answered. She had a point.

Mark Twain might have agreed with her assessment. He once famously quipped that one should choose “heaven for the climate, hell for the company”.

Most of us have some concept of heaven, even if it is one formed by movies like What Dreams May Come, The Lovely Bones, or think it involves meeting Morgan Freeman in a white room. And while not as complicated as biblical ideas about hell, the biblical concept of heaven is not particularly simple either.

it is impossible to state categorically what the Bible as a whole says about heaven… Biblical beliefs about heaven are varied, complex and fluid.

In the Christian tradition, heaven and paradise have been conflated as an answer to the question “where do I go when I die?” The idea of the dead being in heaven or enjoying paradise often brings enormous comfort to the bereaved and hope to those suffering or dying. Yet heaven and paradise were originally more about where God lived, not about us or our ultimate destination.

The words for heaven or heavens in both Hebrew (shamayim) and Greek (ouranos) can also be translated as sky. It is not something that exists eternally but rather part of creation.

The first line of the Bible states that heaven is created along with the creation of the earth (Genesis 1). It is primarily God’s dwelling place in the biblical tradition: a parallel realm where everything operates according to God’s will. Heaven is a place of peace, love, community, and worship, where God is surrounded by a heavenly court and other heavenly beings.

Biblical authors imagined the earth as a flat place with Sheol below (the realm of the dead) and a dome over the earth that separates it from the heavens or sky above. Of course, we know the earth is not flat, and this three-tiered universe makes no sense to a modern mind. Even so, the concept of heaven (wherever it is located) continues in Christian theology as the place where God dwells and a theological claim that this world is not all that there is.

The other main metaphor for God’s dwelling place in the Bible is paradise. According to Luke’s version of the crucifixion, Jesus converses with the men on either side of him while waiting to die and promises the man on a neighbouring cross “today you will be with me in paradise”.

References to paradise in the Bible are likely due to the influence of Persian culture and particularly Persian Royal gardens (paridaida). Persian walled gardens were known for their beautiful layout, diversity of plant life, walled enclosures, and being a place where the royal family might safely walk. They were effectively a paradise on earth.

The garden of Eden in Genesis 2 is strikingly similar to a Persian Royal garden or paradise. It has abundant water sources in the rivers that run through it, fruit and plants of every kind for food, and it is “pleasing to the eye”. God dwells there, or at least visits, and talks with Adam and Eve like a King might in a royal garden.


In the grand mythic stories that make up the Bible, humans are thrown out of Eden due to their disobedience. And so begins a narrative about human separation from the divine and how humans find their way back to God and God’s dwelling (paradise). In the Christian tradition, Jesus is the means of return.

The Easter event that Christians celebrate around the globe at this time of year is about the resurrection of Jesus after his violent death on the cross three days earlier. Jesus’ resurrection is seen as the promise, the “first-fruits” of what is possible for all humans – resurrection to an eternal life with God. This is, of course, a matter of faith not something that can be proven. But reconciliation with God lies at the heart of the Easter story.

The last book of the Bible, Revelation, conflates the idea of heaven and paradise. The author describes a vision of a new, re-created heaven coming down to earth. It is not escapism from this planet but rather an affirmation of all that is created, material, and earthly but now healed and renewed.

This final biblical vision of heaven is a lot like the garden of Eden – complete with the Tree of Life, rivers, plants and God – although this time it is also an urban, multicultural city. In what is essentially a return to Eden, humans are reconciled with God and, of course, with one another.

Heaven or paradise in the Bible is a utopian vision, designed not only to inspire faith in God but also in the hope that people might embody the values of love and reconciliation in this world.

What is hell, exactly? We might joke it’s other people, but the Bible has a more complicated answer