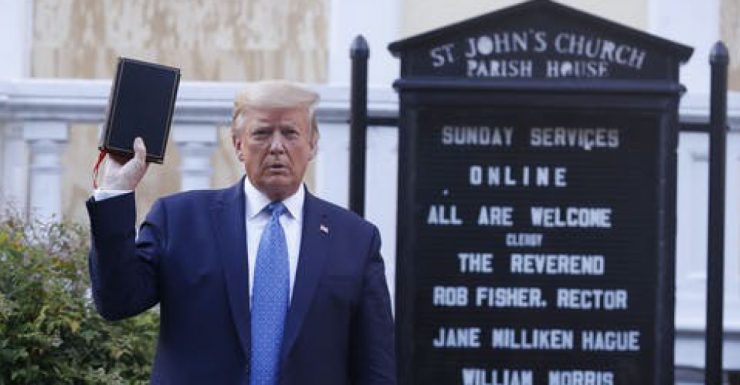 Trump’s photo op with church and Bible was offensive, but not new

US President Donald Trump delivered an address this week in which he threatened military action on the nation. Then he walked to the nearby St John’s Episcopal Church to pose with a Bible.

Yes, Trump held the Bible like a baby holding a spoon for the first time – unsure which end is which – but the real problem was the complete disconnection between the text in his hand and the force, both verbally threatened and actually used, to clear the way for his stunt. Tear gas and militarised police cleared crowds, including some of the church’s own clergy from its grounds, in order for Trump to pose in front of the church.

While Christian outrage at Trump’s hypocrisy is genuine, for reasons that several Christian leaders have elegantly articulated, we need to ask ourselves: did Trump do anything new? Has he done anything that powerful “Christian” leaders haven’t done for centuries?

The answer is no.

Co-opting Christianity in the service of power is almost as old as Christianity itself. In the culture war raging in America, the very president who has stoked the flames of racism and white supremacy effectively claimed God is on his side. It is deeply offensive, but it is not new.

In the early fourth century CE, Flavius Valerius Constantine would defeat his brother-in-law, Maxentius, in a battle for control of the Roman Empire. His victory would solidify him as emperor of a vast western empire.

The legend goes that Constantine had a vision before the battle on Milvian Bridge: he saw a cross of light in the sky and heard a voice that said, “in this sign, conquer”. The next morning, Constantine ordered his soldiers to paint crosses on their shields. They marched into battle as the first cross-bearing “Christian” soldiers. When Constantine won, he would attribute his victory to the God of the Christians.

While historians are quick to point out that this “conversion” of Constantine is as much myth as reality, and may have been motivated by either political expediency or sheer superstition, it marked a turning point for Christianity. The new emperor’s adoption of the cross transformed a persecuted, minority sect into a legitimate religion and, eventually, the official state religion.

The use of propaganda and standardised imagery was not new for the Roman Empire. Indeed, they were already experts in using imagery to communicate dominance, power and a certain worldview. The new element in 312 CE was the type of imagery; Christian instead of pagan, a cross representing the death and resurrection of Jesus instead of a god, goddess or symbol from the Roman Pantheon.

We have been left with a legacy in Western Christianity of powerful rulers claiming God for their cause. The Crusaders rode out to fight Muslims with chests and shields adorned with the sign of the cross, popes would wield more power than kings, and God’s name would be invoked in war after war.

Eventually, Christianity became so synonymous with colonial power and whiteness that the two can be hard to distinguish. It is telling that, in the new Western empire, no American president has been elected without explicitly signalling his Christian faith.

Photoshopped images of Hitler with a Bible started to circulate this week following Trump’s stunt. Evidence already exists for the casual way in which Hitler, too, co-opted Christianity for his cause. A 1930s propaganda book titled Hitler as No One Knows Him contains numerous photographs of Hitler designed to make him likeable. One of them has him leaving a church, implying his Christian faith and basic decency, suggesting he is a good Christian just like so many of those who were deceived by his politics and drafted to his cause.

Closer to home, the Bible arrived on the shores of Australia in the hands of those who would colonise this land through violence and domination. Its diverse history here has been described by Meredith Lake. But the Bible was, at least superficially, synonymous with white culture and power. It would be (mis)used to justify colonisation in Australia just as it was to argue for apartheid in South Africa.

The co-option of Christian symbols by Western Christian empires has meant its core symbols have often been inverted in meaning. The great irony is that the cross worn as a symbol of power and victory by imperial soldiers was first the symbol of the unjust death of Jesus, a brown-skinned Jew killed by the Roman State. It was a shameful symbol in that culture, an image for a humiliating public death.

The Bible, wielded by Trump and others like him, likewise did not begin its life as the text of the victor. Had Trump read the text he held, he would have found a story of liberation for slaves, a divine preference for the poor, a demand of justice for the marginalised, a cry of lament from those who grieve, and a damning critique of any empire that oppressed its people.

What Trump did was not new. But perhaps we are offended because his delivery was so unsophisticated, an insult to our intelligence for its lack of pretence at genuine faith. He didn’t even attempt to enter the church and pray nor open the Bible and read it.

Both church and Bible were mere backdrops, doing the rhetorical work Trump needed in signalling his virtue and values to his base. Values, to be clear, that are antithetical to both the building and the book in his hand.