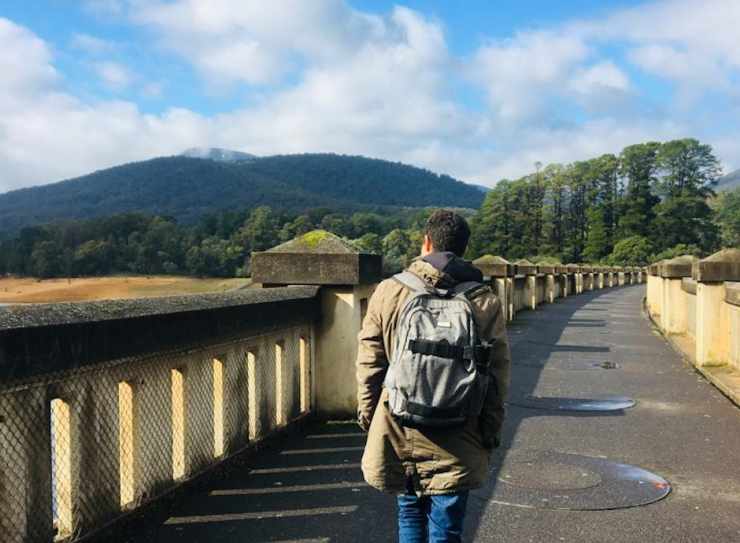 Monastic rules for our lives: The virtue of silence

Walking into the Yarra Valley, one cannot ignore the serenity that compliments the Maroondah Reservoir Park, and the state of stillness drawn from the nature surrounding every person that walks through it. That breathtaking feeling, and that moment of stellar peace has one common appreciation, and that is, for God’s creation.

The world around us today can be filled with a good deal of noise to the extent that even homes can become strangers to silence. Noise creeps into our minds and hearts at every turn of the day, and it becomes so difficult to merely sit in silence.

How can Christians learn and teach silence?

Certainly, there are several tips on silence from various Christian churches that are helpful. Every tradition has its own way to learn and practice silence. A very informative booklet designed for a group bush-hike was published by the National Assembly Uniting Church in Australia titled Pilgrimage to Living Water. It serves as a guide to refocus a person into a prayerful state, bringing them into the still presence of God. The group are instructed to devise times and ways they could practice silence, such as contemplating an icon in silence for five minutes.

I hope to shed light into one ancient prayer, known as the Jesus prayer, drawing upon an exemplar from the Coptic tradition.

For centuries, Copts have recognised certain individuals who, by the grace of God, committed their entire life in spiritual and ascetic training to master the virtues they saw as reflected in the life of Christ. The faithful community, until this day, surround themselves with iconography, hymnography, and reliquaries to remember those individuals for their own benefit and encouragement. Every one of those individuals, the church recognised as a saint, in their own right, since each of them expressed different virtues.

Arsenius the Great (☩ 445), a roman born monk and anchorite, who relocated into the wilderness of Scetis in Egypt, is widely recognised as an ascetic theologian renowned for his virtue of silence. His two works still survive and they are known as Instruction and Exhortation, that serves as a guideline for monastics, and another work, which is a commentary on the Gospel of Luke titled On the Temptation of the Law, that is a discourse on asceticism and the meditative life. These texts are published in the Patrologia Graeca 066. Unfortunately, these works are yet to be translated into English, nevertheless, much of his sayings can be found in the Apophthegmata Patrum (Sayings of the Fathers) and his life in the Coptic Synaxarium (13th of the Coptic month of Bashans).  Many people who are familiar with Arsenius, are instantly reminded of the wise words spoken by him toward the end of his life: “I have often repented of having spoken but never of having been silent.” (Ap. Pat, Arsenius. 40).

The image I have attached (Figure 1) to this piece is a 13th century wall painting from an ancient church at the Red Sea Monastery of St Antony painted by the icon master Theodore Zoghraphos (writer of life). It is a depiction of Arsenius the Great wearing the monastic habit while holding a cross in his right hand and a scroll in the left. The inscription on the scroll is written in Coptic and translates: “O combatant, O Arsenius the pure, O lamb, be silent as you will be saved.”

All throughout the Apophthegmata Patrum, we see several ascetics who thrived toward and taught silence. Abba Agathon put a stone in his mouth for three years until he learned silence (Ap. Pat, Agathon. 15). Abba Arsenius spent so much of his time in silence, that when he heard reeds blowing in the wind, his prayers were disturbed (Ap. Pat, Arsenius. 25). Abba Poemen is also another ascetic who emphasised this virtue. These Egyptian ascetics shared a common struggle, and that is, that they abandoned the world to live in silence, yet, even in the depth of the wilderness, their own thoughts became the cause of their distraction. There seemed to be more noise internally then there was externally. In no way, are their struggles different to our own. They knew the extreme importance of silence, since it was the only way they believed they could unite with the voice of God. Their interpretations of the Gospel saw the silent nature of Christ reflected in several people. Abba Epiphanius, Bishop of Cyprus (☩ 403 A.D.) realised this and said, “The Canaanite woman cries out, and she is heard; the woman with the issue of blood is silent, and she is called blessed; the Pharisee speaks, and he is condemned; the publican does not open his mouth, and he is heard.” (Ap. Pat, Epiphanius Bishop of Cyprus. 6). For these ascetics, talking was not a sin – it is a matter of how their words were used. Since some ascetics feared that they might speak wrongfully, they thought it better not to speak at all. Abba Poemen taught, “A man may seem to be silent, but if his heart is condemning others he is babbling ceaselessly. But there may be another who talks from morning till night and yet he is truly silent; that is, he says nothing that is not profitable.” (Ap. Pat, Poemen.27). Today, Egyptian monks repeat Psalm 141:3 “Set a guard over my mouth, Lord; keep watch over the door of my lips”, before they speak to other monks or lay people, as a short prayer for protection, so that God may guide their speech.

Since these early monastics centred their ascetic practices around meditation, they were required to formulate an effective way to collect their thoughts and empty their minds. They decided to take the words of the Canaanite woman (Matt 15:21-28); the ten lepers (Luke 17:11-19); the blind beggar near Jericho (Luke 18:35-43); and the heartfelt repentance of the tax collector beating his chest saying, “God, be merciful to me a sinner!” (Luke 18:13). This prayer became what is now commonly known as the Jesus Prayer or in Coptic tradition, the arrow prayer (sahmyat), and was adopted by monastics not only in Egypt, but all over the world. They worded the prayer: “My Lord Jesus, have mercy on me, a sinner”, and used it as a fundamental starting point to control their minds and hearts, in order that they might discipline their behaviour and in turn, bring themselves into a state of complete inner silence.  It was Arsenius who emphasised, “strive with all your might to bring your interior activity into accord with God, and you will overcome exterior passions.” (Ap. Pat, Arsenius. 9). By continually repeating the name of Jesus on their tongues and imploring for healing by remembering their sins, these early Egyptian monastics had opened a window into a meditative tradition that would prove effective into the lives of many Christians who practiced it thereafter.

The example of Arsenius as a role model for the virtue of silence is a very relevant reminder for Christians today. In Melbourne, during youth services, Sunday school, and even the Sunday homily, Coptic clergy and lay leaders, encourage their communities to spend a few minutes a day in meditation with the Jesus Prayer, and allowing the remainder of the day for the Holy Spirit to work in their lives as active members of the wider community. The Jesus Prayer is combined with breathing strategies to encourage a holistic prayerful state. They are taught to inhale and recite, “My Lord Jesus Christ”, and exhale saying, “have mercy upon me a sinner”.

Silence is observed and expressed in different ways to all people. It is the loudest form of prayer, and its purpose, like many other virtues, is to bring one into unity with the voice of God. Silence is certainly a mystery unspoken.

~ Lord Jesus, teach us the silence You taught the disciples by your living example. Empty our minds and fill our hearts with Your Holy Spirit, that we may hear Your sweet voice forever. “[For] truly my soul silently waits for [You, Lord]; From [You] comes my salvation.” (Ps 62:1). Amen.

Women priests could help the Catholic Church restore its integrity. It’s time to embrace them