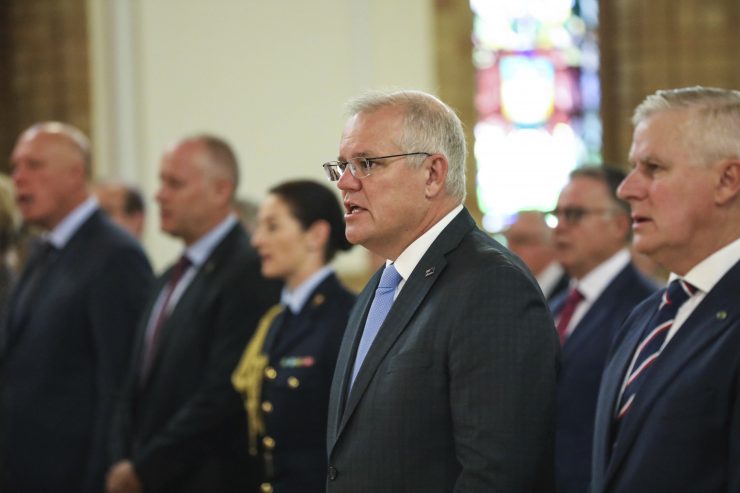 Morrison’s Christian empathy needs to be about more than just prayer – it requires action, too

Over the past week, Australians have heard Scott Morrison make several explicit references to his faith. Given Morrison has placed his faith front and centre of his public persona, it is helpful to try to understand how he perceives his faith and how it might intersect with his job as prime minister.

For me, Morrison’s recent comments about faith and prayer reveal a pattern of human passivity, dependence on divine intervention, and potential abnegation of power.

For example, in his 60 Minutes interview, Morrison’s response to a question about his empathy was:

To be fair to Morrison, it would be odd for a person of any faith not to include prayer as part of their expression of concern for those who suffer or struggle. Such an approach has a long tradition. But we might expect more than just prayer from a devout Christian who also happens to be the prime minister.

In this response, he appears to prioritise prayer over action, which is astonishing given the power he holds due to his position. In the Christian tradition, prayer informs and even motivates action; it does not replace it. Such a response is also, of course, a way of signalling his piety to certain constituents.

It is not an isolated example. Take, for instance, his address to the Australian Christian Churches National Conference in 2021, where he told the crowd:

I can’t fix the world, I can’t save the world, but we both believe in someone who can.

That someone, of course, is God.

On the one hand, it shows admirable humility to acknowledge that even the prime minister cannot “fix the world”. But in alluding to the “someone who can”, Morrison appears to be giving over his agency and responsibility to God. Leave it up to God to act.

More recently, in a speech commemorating 14 years since the Rudd government’s “sorry” to Indigenous peoples, Morrison shifted the focus to forgiveness, which sparked fury.

Morrison explicitly stated that forgiveness was an individual, not a “corporate” matter, expressing a hope for the kind of healing that came through forgiveness. His desire to move from apology to individual forgiveness is entirely consistent with his stated spirituality which emphasises individual and personal faith.

But it is also theologically thin. Trawloolway man and theologian Garry Deverell was quick to point out the prime minister had missed a step. In the Christian tradition, no apology can insist on forgiveness, and seeking forgiveness for harm done requires repentance, acts of restitution, and attempts to address injustice. The spiritual cannot be divorced from the physical, tangible, social, and political dimensions of life.

There’s a classic story that does the rounds in Christian circles of a guy who gets trapped when his town floods. In a desperate attempt to avoid the rising floodwaters he climbs onto his roof and prays to God to save him.

Soon a rescue crew in a boat come past and invite him into their boat, but he refuses. “God will save me,” he says.

Later a helicopter flies by and a man descends on a rope. He is offered a way off the roof by the rescue crew, but again he refuses. “God will save me.”

Eventually the man dies and goes to heaven, but he is confused. “Why didn’t you save me God?” he asks. “I’ve been a faithful Christian my whole life.”

And God replies: “What do you mean I didn’t save you? I sent a boat and a helicopter. You refused them both.”

Such parabolic stories demonstrate a Christian theological belief that God works through and with human activity, not despite it. It points to the need to integrate belief, prayer and action.

Theology – how we think and talk about God – matters precisely because of its implications for human activity. I have no reason to doubt that when Morrison talks about his faith he is sincere, and when he expresses his care for people primarily through prayer he is behaving in a normal way for his faith community. Yet this kind of passivity and trust in divine intervention is not the only or even the fullest expression of Christian faith.

Faith and power should integrate, not separate

The danger of emphasising personal prayer as the primary expression of Christian care is that social responsibility can be abdicated. Pray and leave it up to God can be a cop-out, particularly for those with power. It can be a way to ignore systemic injustice by reducing faith to something personal and private.

As Brittany Higgins put it so eloquently in her recent National Press Club address: “I didn’t want his sympathy as a father, I wanted him to use his power as prime minister.”

Theologians like Dietrich Bonhoeffer offer an alternative expression of Christian faith. Bonhoeffer lived and wrote during the early 20th-century rise of Nazism in Germany. In his well-known book The Cost of Discipleship, Bonhoeffer writes about “cheap grace”, which is the kind of faith that wants forgiveness without actual repentance, and justice or peace without personal cost. Cheap grace wants the inner spiritual resolution without the outward costly work.

For Bonhoeffer, that outward work included vocal criticism of the Nazi regime and of Christians who were silent bystanders. Bonhoeffer saw the way of Jesus was one that demanded practical help for victims of injustice and, where necessary, resistance to government. Arrested for conspiring to rescue Jews, Bonhoeffer was imprisoned before being executed at the Flossenbürg concentration camp in 1945.

Not every Christian needs to become a martyr, but as Garry Deverell writes:

The Christian is called not to separate but to integrate their faith and their public presence, work or office.

This broader view of faith is seen in the call of Tim Costello for the prime minister to act on his faith when it comes to climate change, or in the urging of church leaders for more compassionate action for refugees based on Christian values. After all, Jesus teaches that whatever one does for the least among us (defined as those who are hungry, poor or imprisoned) one does for Jesus.

Morrison is not the first prime minister to be a person of deep faith, nor will he be the last. That is not the issue. All politicians are informed by their value systems and beliefs, regardless of the religious or non-religious traditions that shape them.

Neither am I criticising Morrison for speaking out about his faith. I am, however, critical of the highly individualistic, spiritualised version of faith Morrison espouses, which allows him to shirk personal responsibility and action when convenient.

There are millions of faithful Christians in this country who also wear out the carpet in prayer every week. The difference is they do not hold the highest office in the land, nor have Morrison’s power to enact change.

Contemplating the reign of Christ in a season of uncertainty