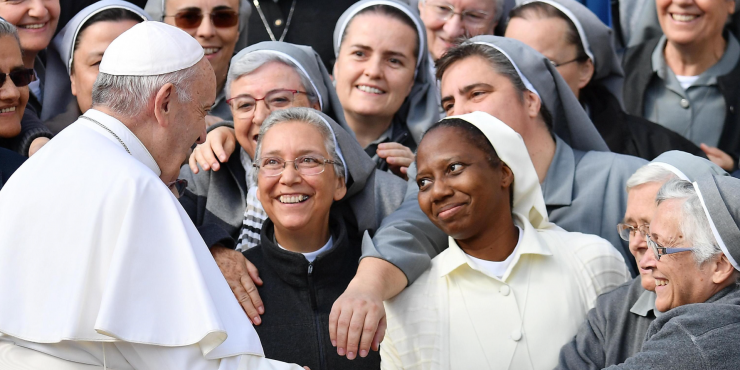 Women priests could help the Catholic Church restore its integrity. It’s time to embrace them

In the wake of the royal commission into child sexual abuse, Christian churches in this country need not only radical reform of their principles and practices, but also ways of recovering their integrity. For the Catholic Church, with its patriarchal structures, ordaining women to the priesthood is one way to achieve this.

In 2016, Pope Francis appointed a commission to report on women in the early church, asking the question of whether women could be ordained as deacons. (Deacons are the first level of ordination in the Catholic Church before priesthood.)

Now the pope has said the commission was divided on the issue. The commission agreed there were women deacons in the early church, but disagreed on whether they had any power. The pope has handed the report to a gathering of the heads of female religious orders, and may call the commissioners back for further input.

Note that, in all this, the Catholic Church has not even begun to debate the question of whether women can be priests (the second and more powerful level of ordination in the church). Yet if we look closely at the Bible and the history of the church, there are very good reasons why women should hold these positions of high authority.

As the mother and grandmother of Catholic children, it pains me that women cannot be ordained in the Catholic Church. I can tell my grandson that he might think about becoming a Catholic priest when he grows up, but I cannot say the same to my granddaughters.

As an Anglican priest, I have seen ordained women of extraordinary capacity working in the Anglican Church and exercising authority. I know women deacons, women priests and women bishops, and can testify to the marvellous work of ministry they are doing.

I also know scores of Catholic women who would make truly remarkable priests. They are loving, self-giving, intelligent and responsible, with spiritual depth and wisdom. They would do much to restore the church’s integrity.

The main argument used in the Catholic hierarchy to exclude women from priesthood is that, to represent Christ at the altar in Mass, the priest must be male. The priest stands in for Jesus and therefore has to have a “natural resemblance” to him, and that resemblance is his maleness.

Opponents to women priests also claim that, at the Last Supper, Jesus ordained the 12 male apostles and no women. In subsequent church tradition, they say, women were never priests and to ordain them now would make the church contradict its own tradition.

Yet there are a number of arguments, from within the church’s own theological framework, that strongly support the ordaining of women as priests. At the most basic level, the church baptises (christens) females as well as males; there is no gender barrier around baptism. This has enormous implications.

Jesus was not only male but also Jewish. Priests in the Catholic Church are not required to be Jews, but can represent Christ from widely divergent ethnic and cultural backgrounds.

Maleness, in other words, is given a significant weighting over all other social and cultural differences, including femaleness. In this sense, this belief represents an idolatry of maleness – an exalting of male over female, despite the inclusive impetus of baptism and despite the fact that, in creation, women as well as men are made equally in God’s image. The “natural resemblance” to Christ that is needed is not maleness but rather humanness.

Biblical scholars, moreover, have argued that Jesus ordained no-one in his lifetime: neither at the Last Supper nor anywhere else. It is even possible that women were present at this event.

There is compelling evidence that women, in the ministry of Jesus and the early church, held positions of leadership and authority. Mary Magdalene was the first to meet the risen Christ and the first to proclaim its message to the other disciples; the later church called her the “apostle of the apostles”.

Read more:
Friday essay: who was Mary Magdalene? Debunking the myth of the penitent prostitute


We find references in the New Testament to a female deacon (Phoebe), to a female apostle (Junia) and to a host of women who were leaders in ministry. The same is true for the early centuries where there is evidence of women deacons and priests, and even of a female bishop.

The exclusion of women from leadership in the church came at a later date (possibly in the fourth century and later in some places) when it lost something of its radical beginnings, inherited from Jesus. Here the argument from tradition – that women never were ordained or held positions of leadership – simply does not hold.

The Catholic Church believes that tradition is dynamic: unfolding and developing throughout history (this was most famously articulated by John Henry Cardinal Newman in 1845). New perspectives and understandings can and do come in new contexts. The ordination of women belongs arguably in this category of new and emerging truths.

In a number of Anglican churches, particularly in places where terrible abuse occurred in the past, the appointment of senior, ordained women has had a vital role to play in reforming and transforming the church.

Women’s ordination is necessary in the current climate of the Catholic Church. There is no better time for it to happen than now. It will confirm, in ways beyond mere words, the church’s determination to move beyond the sins of the past. It will mean a significant move beyond the old structures where only men made decisions and a protective boys’ club existed within leadership.

This is not a call coming only from outside the Catholic Church. Many of the faithful within believe the same thing, and Catholic women in places such as Ireland and Germany are becoming more vocal and organised in their fight for women’s ordination.

In Australia, too, there are Catholic women working to be heard on the issue, supported by both laity and priests. Now is the time for something new to emerge from the ashes of the past.

Alumnus pioneers ‘Empowerment Script’ to help with PTSD and trauma

Nourishing our ministries through Ignatian spirituality