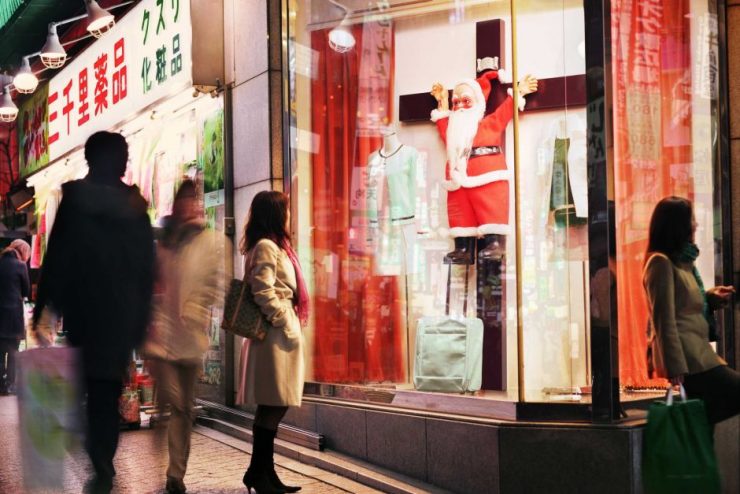 Easter’s iconography is fluid, and sometimes people get their wires crossed

This article was published by ABC News on 21 April 2019. Read the original article here.

The Virgin Mary on a broomstick. Santa nailed to a cross. KFC’s Colonel Sanders in a Santa suit.

As Australia moves to celebrate Easter, some may ponder how the holiday’s roots in the Crucifixion and rise of Jesus annually turns into a debate over the availability of hot-cross buns and chocolate bunnies.

While the religious roots of Easter may be detaching for the growing number of Australians who profess no religion, spare a thought for non-Western countries who also have to contend with the iconography of Christian holidays that have been refracted through consumerism.

One of the most famous examples of this mistranslation is the story of a Japanese department store nailing Santa to a cross when the country first starting rolling out Christmas as a sales event.

The story’s been cited by various media organisations over the years including the BBC and The Economist, but images of its first appearance have been elusive.

This has not, however, stopped artists and those with image editing skills from referencing the long-cited tale over the years, including New York-based painter Robert Cenedella with his 1997 painting The Presence of Man.

In 2005, Japanese artist Yoshio Itagaki created the work Santa Cross as part of a series looking into urban legends, specifically for their propensity to reflect “uncensored reflection of our desires, fears, expectations or curiosity“.

“What gives symbols power is the fact that their meaning is so open-ended,” said Dr Claire Renkin, a lecturer in Christian thought and history at Melbourne’s Yarra Theological Union who has specialised in art history.

“There will always be potential for hundreds and thousands of possible interpretations, including the one that is culturally significant, including the Crucifix.”

How did Easter’s image spread?

Christianity, and its subsequent legacy of religious art, has found itself around the globe via a number of mechanisms, but it has primarily spread via European colonisation.

“In many areas and at many times it was assumed that Western understandings and traditions were superior, which has dominated,” said Dr Renkin.

“So [Christian imagery] stems from how that message was transmitted: Who was controlling the process of deciding what the correct models were, and what were not?”

Because of this legacy, historical depictions of Jesus Christ spread around the globe followed Euro-centric forms of representation — despite the fact that he was more likely to be a brown-skinned citizen of the Middle East.

While colonised countries carried over these European images based on missionary books and art, over time these representations shifted as distinctive new cultural narratives were born.

In Mexico for example, images of Our Lady of Guadalupe blends Catholic iconography with that of the Aztec’s — which stems from an alleged appearance of the Virgin Mary to a Mexican in 1531.

“If you study Christian art in churches that have been commissioned now, what’s exciting is that it has been reimagined and enculturated in the visual language of the people themselves,” said Dr Renkin.

“And that’s something we see especially here, when looking at Australian Indigenous art.”

Even the Easter bunny comes from a mistranslation

Gunther Hirschfelder, a professor of Cultural Studies at the University of Regensburg, told the German broadcaster Deutsche Welle that the hare, or rabbit, came about because of a mistranslation of the biblical rock hyrax — found across South Africa and the Middle East — by Augustine.

“They are actually related to an elephant but resemble rabbits.

“Through this mistranslation, the hare worked its way into the accepted wisdom of the church and to a certain extent became a symbol of the resurrection,” he said.

Mr Hirschfelder explained that the bunny’s first forms in relation to Easter were recorded in the 19th century and left for America with German immigrants.

While the bunny has since become a globalised secular symbol of the holiday, the icons that have defined Easter for Christians around the world have also been relatively recent introductions.

“People are often surprised when they realised that the crucifix is one of the later iconographic forms to emerge in the history of Christian art,” said Dr Renkin.

“Up until about the fifth or sixth century, it was very unusual to show the figure of the cross with Christ on it.

“In my own experience, when speaking to people, I find that Christians find it very unsettling and even threatening when contemporary artists try to reimagine depictions of the crucifix.

“They’re basing their idea of a crucifix which has its roots in say the last 150 to 200 years.”

Where will non-Christian cultures take Easter?

In Dubai, restaurants and hotels have planned Easter-themed brunches for residents, while visitors to Tokyo’s Disney resorts will be able to purchase up to 60 different types of Easter-related merchandise, while restaurants across the park will be “offering dishes that contain eggs or look like eggs“.

Completing the resorts’ Easter marketing bonanza will be a new character called “Usapiyo” — a chick-like figure with white bunny ears.

“We shouldn’t be surprised that other countries will either follow or adopt certain trends,” said Dr Darius von Guttner, a historian with an interest in medieval and global history at the University of Melbourne.

“No culture is static, and we can look at the imposition of Easter by the West, [we] just also need to look at whether the recipients are happy to be exposed to it.”

Obviously, there are areas where the ability to be exposed to alternative modes of worship are vehemently fought against.

In China, Christian churches have been lit on fire and have had crucifixes replaced with images of Chinese Communist Party leaders.

In the Victorian regional centre of Bendigo, Muslim worshippers faced violent threats against their plans to construct a mosque in the city’s east.

At the extreme end of the spectrum, Islamic militants Boko Haram have killed or kidnapped hundreds of Nigerians in a war against Western cultural influence.

Indeed, throughout Nigerian history, successive generations of Muslim and Christian communities have equally attempted to displace indigenous forms of worship.

While communities around the world may be commemorating religious or secular Easter traditions, “right” and “wrong” attempts to define what is sacred will ultimately contribute to a global storybook that may be modified once more.

“We’ve always borrowed from each other, be it through violence, trade or love,” said Dr Guttner said.

“That’s the way humanity grew to what it is today.”

Yarra Theological Union is an inclusive and welcoming community, Catholic by tradition and ecumenical in spirit. We are committed to being a community of scholarship, prayer and pastoral care. We offer theological education and ministerial formation, open to those who seek educational and personal transformation in changing contexts. Our mission is to equip people for various ministries in the churches: parishes, schools, hospitals, church agencies and in the world at large.

What and where is heaven? The answers are at the heart of the Easter story