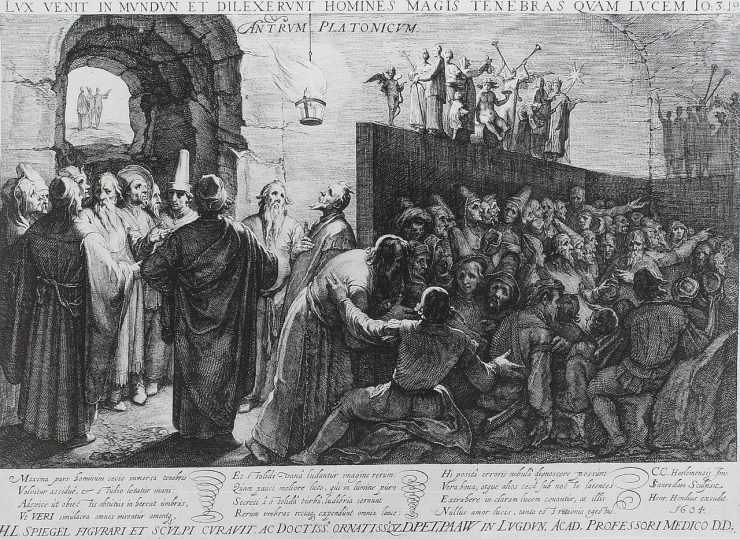 One of the oldest functioning images in Western Philosophy is Plato’s Allegory of the Cave which occurs in the Republic. What we think of reality is considered to be little more than the shadow of a model cast on a cave wall. The reality is actually outside the cave – in the sunlight … Woe betide the person who comes and tells the cave-dwellers that they are watching a shadow on a wall and that it is really real. Plato’s cave seems a rather dreary place, not unlike my lockdown.

Plato’s image of the cave persisted, its locus of meaning shifted, and it became critical to Christian mysticism. The idea of breaking free, of escaping, from the cave of our own ignorance or feebleness of understanding, of getting into the light, and gaining some vision of the reality of God preoccupied Christian mystics of the East and West for hundreds of years from Dionysus the Areopagite to Teresa of Avila and beyond. The apophatic tradition which stresses the utter difference of God from humanity, the inadequacy of our attempts to describe God, and relishes the mysterious silence and emptiness of the cloud of unknowing hearkens back to Plato’s Cave.

If mysticism should seem a bit airy-fairy, or escapist, it is well worth remembering that one of the most influential and practical mystics of the 16th century was Inigo (Ignatius) of Loyola. For him, mystical experiences would always result in making a practical and concrete difference to this world, and the life lived in it.

Inigo’s experience was shaped in particular by the time he spent in prayer at the cave near Manresa.

There he encountered God, and went through the movements of the Spirit, which would come to be recorded and known to the world as the Spiritual Exercises. Not going out, he rather trod the journey inside, to his own heart, and the core of his being, to find out God’s will for himself. He focussed particularly on what Christ, on the Cross, had done for the world, and what choices that event asked of him.

As I write this from my desk in lockdown, both Plato and Inigo remind me that, cave-dweller as I may currently seem to be, there is whole wonderful world waiting outside. And that I can best use my time in my own little cave to make a difference one day on the outside.

Let me start – in my cave, in my lockdown … at the foot of the Cross.