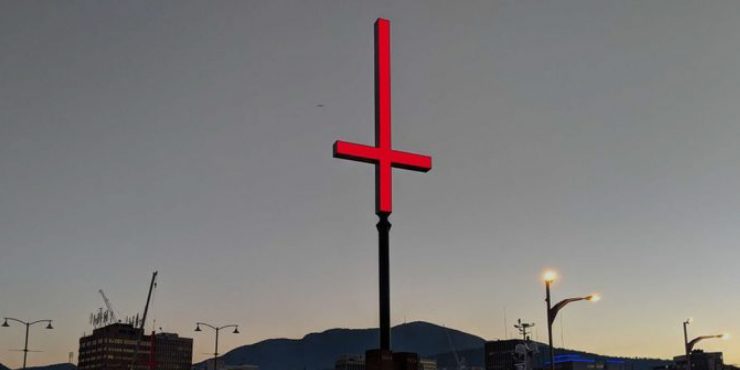 An Insult to the People of the Cross: Sacrilegious Symbols Have No Place in Hobart

This act has come as an offensive shock to millions of Christians around Australia. For more than a millennium, inverted crosses have been used by Satanic worship groups as an anti-Christian symbol in mockery of Jesus Christ.

From the early centuries of Christianity, Christians were not able to display the cross publically as it could have led to persecution. Other symbols where more commonly used such as peacocks, doves and particularly fish – which, in Greek, forms an acronym for “Jesus Christ, Son of God, Saviour.”

It was only after the conversion of Emperor Constantine to Christianity in the fourth century that the cross was promoted as a Christian symbol.

While many churches, particularly throughout the West, enjoyed a peaceful existence during the middle ages, the Christian Copts in Egypt, being the native descendants of the Ancient Egyptians, were soon the minority in their native land following the Arab invasion of Egypt in the seventh century. The central Christian symbol of the cross could no longer be freely displayed publicly; instead, Christians were forced to wear blue or black clothing and to wear heavy metal crosses that caused severe bruising, causing the Copts to be referred to as “blue-necks.”

Even today, many Copts in Egypt have small cross tattoos on their right wrist or hand as a way of witnessing to their Christian identity as a minority group in Egypt. The tattooing of these small crosses serves as a reminder to the Coptic Christians, one of the oldest Christian groups in the world, that they are called to witness to Christ as their fellow believers have done in the past, sometimes suffering persecution and even death for their faith.

Persecution is not a distant memory in the hearts and minds of the Copts, it is a living reality. Earlier this year, a young Christian man named Bassem Attallah was killed when Islamic extremists in Egypt saw his cross tattoo and asked him if he was a Christian, to which he boldly answered, “Yes, I am a Christian.”

In February 2015, Islamic State militants searched a workers’ compound in Libya looking for Copts – whom they labelled “people of the cross.” The graphic video which shows their death, depicts the 21 Coptic hostages in orange jumpsuits being beheaded by their captors on a Libyan beach with the video captioned, “The people of the cross followers of the hostile Egyptian church.” This was followed by a number of attacks on “the people of the cross” – the Copts, such as the bombing of a church in Cairo in December 2016, and two other bombings in Alexandria and Tanta on Palm Sunday in 2017 during packed Church services, killing dozens of worshipers.

The Copts are not the only Christians in recent times to be persecuted. Countless Christians have been martyred in recent years in Iraq and Syria by Islamic extremists. Many Russian Christians were martyred by the Communist Party in the Soviet Union in the twentieth century. 1.5 million Armenians were killed in the Armenian Genocide 100 years ago, with many Christian women dying by crucifixion.

The cross – being the central symbol of Christianity – is a symbol of victory, love, sacrifice and hope, and serves as a daily reminder of the reality of a longstanding history of Christian suffering and persecution. One Coptic hymn which affirms this reads:

We carry you, O Cross, the protector of brave Christians,
powerfully around our necks,
and we proclaim openly:

Hail to you, O Cross, the joy of the Christians,
the conqueror of tyranny,
our confirmation, we the faithful.

The display of such anti-Christian sentiment around Hobart is deeply offensive to me as a Christian, a Coptic Orthodox Christian bishop who has witnessed the living reality of persecution, and many other Christians who have lost loved ones or suffered themselves for their faith. Even today, in many parts of the world, people risk their lives by secretly carrying or displaying crosses.

It would not be acceptable to use an Islamic crescent or the Jewish Star of David, or the symbol of any other faith as a form of mockery against their respective faiths in the name of art today. Nor should it be appropriate to use the most central Christian symbol in this way.

I urge the government authorities and particularly the mayor of Hobart to intervene immediately to remove these offensive inverted red crosses from Hobart’s tranquil and beautiful harbor and not continue offending the millions of Christians in Tasmania and Australia.

His Grace Bishop Associate Professor Suriel was the Bishop of the Coptic Orthodox Diocese of Melbourne, and the Chancellor and Dean of St Athanasius College. Bishop Suriel lectured at the University of Divinity in Religious Education, teaching units in religious education, youth ministry, comparative religions and pastoral ministry. Bishop Suriel concluded his role with the University of Divinity in 2018.

Robin Mann to be awarded Doctor of Divinity

Voluntary assisted dying is not a black-and-white issue for Christians – they can, in good faith, support it