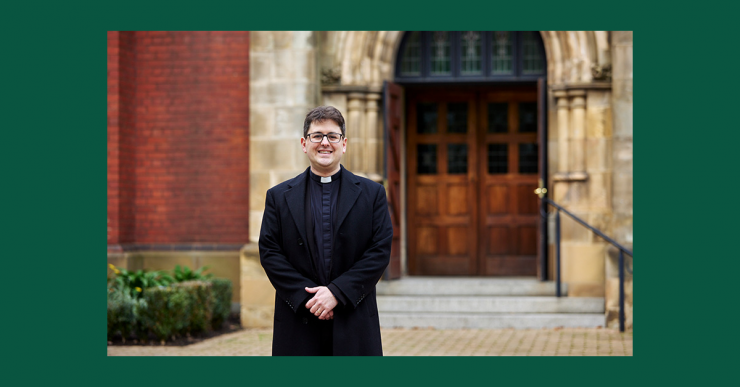 Father Luke Hopkins took on Trinity’s chaplaincy role in 2022. Here he shares his path to becoming ordained and how he serves our community.

You’re a former student of Trinity College, what and when did you study here?

I undertook my doctorate at Trinity and was a resident post-grad from mid-2015 to early 2018.

What did you study?

My PhD is entitled Cyprian of Carthage and the Australian Anglican Episcopate. In the thesis, I looked at an ancient Christian bishop called Cyprian who lived in North Africa and his understanding of the church and its ministries. I then looked at how Anglican Christians have received those ideas since the 16th century onwards and how they might be relevant for the contemporary period. I argued that some of Cyprian’s ideas about bishops still have relevance for today.

Did you have dreams of becoming ordained when you took up theological study?

Yes. I felt a pull towards becoming a priest when I was about 16. Several people helped me to nurture this vocation very early on (including a priest who had formerly been a chaplain at Trinity) and helped me to put myself forward for discernment. Consequently, I went straight into theological study out of high school. My doctoral studies later on were all part of furthering my education in areas I had developed a passion for.

Why was ordination appealing?

I was very fortunate to have been in contact as a teenager with great priests who inspired me. I am very thankful that I had very good role models and teachers. Discerning this vocation began, I suppose, by imagining myself being a priest and watching how others did it. The more I imagined, the more it felt like this was something or someone that I was meant to be. The more I thought about it and the more I prayed about it, that sense just grew stronger. I am grateful that other people also recognised this vocation and encourage me to pursue it.

Did you ever envisage becoming a chaplain growing up? If not, what did you want to be?

I think as a five-year-old, I wanted first to be a zookeeper. There are probably some similarities between that and chaplaincy…

Although I was baptised as a baby in an Anglican church, my family did not regularly go to church when I was a kid. When I was about 13 or 14, I got a real desire to attend a church. As such, in reverse of the usual narrative, I would drag my parents out of bed to go to the local Anglican parish (St James’ Morpeth). After attending for a while, I got more involved in the community, which was very warm, welcoming and inclusive.

Although I think I had always believed in God in a way, I came to understand God in a new and fresh way. There was so much I had presumed I knew, but I really felt as if I was coming to see the depth and breadth of the Christian faith for the first time. I was confirmed when I was about 15 and then felt a call to ordained ministry before I finished high school.

How would you describe the role of chaplain at Trinity?

Essentially, a chaplain is called to be a priest to the College community – similar to a vicar or pastor in a parish. They serve to remind the College of its Christian identity and to assist everyone to embody that in words, actions and sacrament. A bishop once told me that being a chaplain is to be a ‘friend of Christ’ who helps others to become friends of Jesus Christ too. Whether or not someone identifies as a Christian or not, the chaplain is there to support them through the highs and lows of university life.

The role of chaplaincy has several parts – worship and prayer, pastoral care, education and administration. The College chaplain is there for the entire Trinity community – the Residential College, Pathways School and Theological School. I’m there to help with the wellbeing of everyone who makes up the Trinity community. For me, someone’s wellbeing necessarily includes their spiritual wellbeing.

The chaplain also has responsibility for all that occurs in our Chapel and leads discussion groups and opportunities that allow our community members to learn more about the Christian faith. It’s all of these things combined (and more) that make up a chaplain’s role.

What kinds of things can students and staff come to see you about and what can they expect?

The answer to that question is ‘everything’. Good things. Bad things. I am here for anyone who just wants to have a very casual chat all the way to a serious philosophical conversation.

What can people expect? Someone who is there to listen and who genuinely cares. If you want someone to talk to, someone to pray for you, someone who will just listen as you get all the stuff weighing on your mind out into the open – I’m here.

It wasn’t very long ago that I was student myself and a resident at Trinity, so I know exactly what our student community (including the staff) goes through and the highs and lows. I know what it is to study at an undergraduate and postgraduate level, so I can be there for anyone who needs a few academic pointers as well. I won’t pretend to be an expert on every subject, but I’ll help as best I can.

As an aside, as someone who is licenced to perform weddings in Victoria, I can also witness legal documents like statutory declarations, if someone needs that kind of assistance as well.

Do those who wish to see you need to be religious or of a particular faith?

What are the best words of advice you’ve ever been given?

‘You can’t always get what you want, but if you try sometimes, well, you might find you get what you need.’ Rolling Stones