A bridge between: Spanish Benedictine Missionary Women in Australia 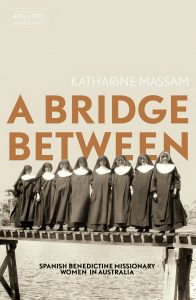 This sensitive account of Spanish Benedictine women at an Aboriginal mission in Western Australia is poignant and disturbing. Notable for its ecumenical spirit, depth of research and deep engagement with the subject, A Bridge Between is a model of how religious history, in its broader bearings, can be written.
— Graeme Davison, Monash University

With great insight and care, A Bridge Between presents a sympathetic but not uncritical history of the lives of individuals who have often been invisible. The story of the nuns at New Norcia is a timely contribution to Australia’s religious history. Given the findings of the Royal Commission, it will be widely read both within and beyond the academy. History is, here, a spiritual discipline, and an exercise in hope and reconciliation.
— Laura Rademaker, The Australian National University

A Bridge Between is the first account of the Benedictine women who worked at New Norcia and the first book-length exploration of twentieth-century life in the Western Australian mission town. From the founding of a grand school intended for ‘nativas’, through links to Mexico and Paraguay then Ireland, India and Belgium, as well as to their house in the Kimberley, and a network of villages near Burgos in the north of Spain, this is a complex international history. A Bridge Between gathers a powerful, fragmented story from the margins of the archive, recalling the Aboriginal women who joined the community in the 1950s and the compelling reunion of missionaries and former students in 2001. By tracing the all-but-forgotten story of the community of Benedictine women who were central to the experience of the mission for many Aboriginal families in the twentieth century, this book lays a foundation for further work.

Associate Professor Katharine Massam is the Academic Dean at Pilgrim Theological College, University of Divinity. Katharine’s research explores intersections between Christian tradition and wider culture in postcolonial, settler societies, including Australia. She writes on the history of Christian spirituality (especially Benedictine traditions), cross-cultural encounter in the Australian mission context, the dynamics work and leisure, and is especially interested in methodologies that open-up neglected sources and experience (such as historical readings of space and place, devotional literature, art, music, and material culture).