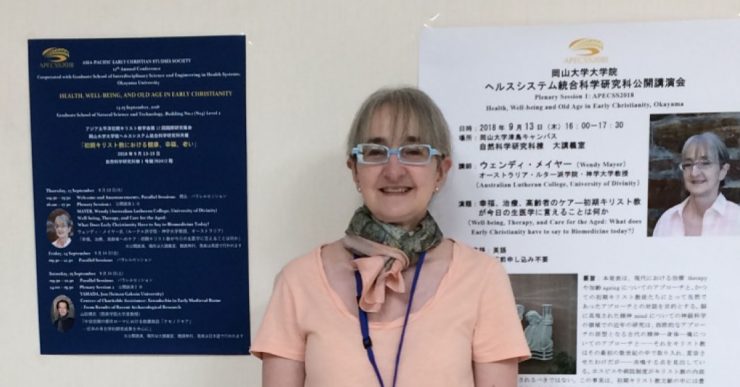 Congratulations to Professor Wendy Mayer, elected Head of the Religion section of the Australian Academy of the Humanities.

According to Professor Julianne Schultz, in 1959 when Australia’s Prime Minister Robert Menzies approved the foundation of the Humanities Council he wrote that it would provide:

Wisdom, a sense of proportion, sanity of judgement, a faith in the capacity of [hu]man[kind] to rise to higher mental and spiritual levels. We live dangerously in the world of ideas, just as we do in the world of international conflict. If we are to escape this modern barbarism, humane studies must come back into their own, not as the enemies of science, but as its guides and philosophic friends.

It’s successor body, the Australian Academy of the Humanities, continues to work towards those goals, especially at a time in Australia’s history when the teaching of the humanities is under threat. In the recent furore over the Education Minister’s excision of 11 successful Australian Research Council grants in 2018, it was the swift response of the Academy’s President, Professor Joy Damousi, that helped to publicise the action and promote public conversation.

The Academy, to which Fellows are elected only after rigorous international peer review, advocates for and works to build future capacity in the humanities in Australia and to network Australian expertise internationally.

Religion is one of 11 sections that reflect areas of expertise in the humanities. The Head of Section is the conduit between the discipline area in Australia and the Academy Council and Secretariat. Heads of Section are a key source of advice in the formulation of policy responses to the government.

Professor Mayer was brought onto the faculty of Australian Lutheran College (ALC) in 2017 as its first Associate Dean for Research and Research Professor. Since then she has worked closely with the Research Office to build capacity at ALC in the higher degree by research (HDR) sector. In addition to serving on the UD Research Committee, she has served on the doctoral review committee and the ERA 2018 Publications and EI Reporting working committee. She serves on the editorial boards of a number of international journals and book series, and is Associate Editor of Journal of Early Christian Studies, and co-editor of the new series Critical Approaches to Early Christianity (Brill). Her expertise is in increasing demand internationally. In 2019 she is a Directrice d’étude invitée at the École Pratique des Hautes Études, Paris, has been invited to contribute to an Interfaculty Research Collaboration, Religious Conflicts and Coping Strategies at the University of Bern, and is an invited researcher at the University of Regensburg. In August she will deliver an invited plenary lecture at the peak body in her discipline area, the International Conference on Patristic Studies, Oxford.