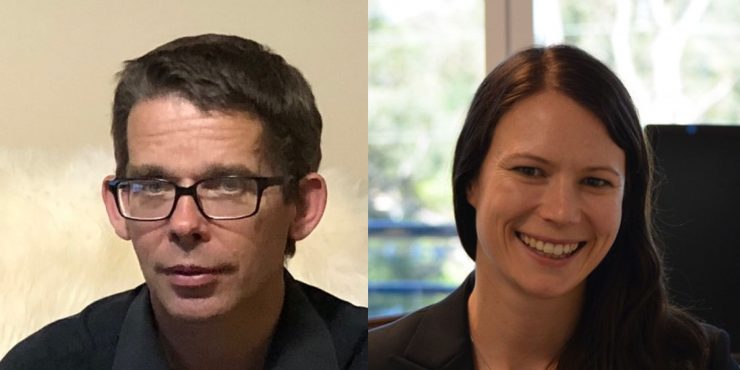 Trinity College is delighted to announce the appointment of two new members of faculty in the Trinity College Theological School, the University of Divinity.

Following the retirement from Trinity of long-standing members of faculty, the Revd Dr Cecilia Francis and the Revd Dr Don Saines, two new staff have been appointed after a national search. The Revd Dr Fergus King will take up the important role of Director of the Centre for Ministry Education, while Dr Rachelle Gilmour has been appointed as Lecturer in Old Testament. These appointments follow the arrival in December of New Testament scholar the Revd Associate Professor Robert (Bob) Derrenbacker as Dean of Trinity College Theological School.

Dr King is well known to Trinity having already taught for several years as an Adjunct Lecturer. He is a graduate of the Universities of St Andrews, Edinburgh and South Africa, and was ordained in the Scottish Episcopal Church. From 1992, he lectured at St Mark’s Anglican Theological College in Dar es Salaam before joining the United Society for the Propagation of the Gospel in London in 1998. Fergus moved to Australia in 2005 when called as Rector of Kotara in the Anglican Diocese of Newcastle. He taught Biblical Studies, Missiology and World Christianity at the University of Newcastle, and served as University Chaplain. He has published three books and more than thirty articles and book chapters.

Fergus, along with his wife Irene and their three young boys, is looking forward to joining the Trinity College community, where, he says, his new position will allow him to focus his enthusiasm for teaching, research and contextualised ministry training.

Dr Gilmour completed her doctoral studies in Hebrew Bible at the University of Sydney in 2010. She then undertook postdoctoral research at the Hebrew University of Jerusalem and the University of Edinburgh. She has held positions as Senior Lecturer in Biblical Studies at the Australian Institute of Theological Education, and research fellow at the Centre for Public and Contextual Theology, Charles Sturt University.

Rachel is an editor for the Review of Biblical Literature and co-chair of the Society for Biblical Literature (SBL) annual meeting consultation on the Book of Samuel. She has published on various aspects of narrative art, memory and history in the books of Samuel and Kings, and dystopia and dialogism in the prophecy of Jeremiah.

I’m delighted to be joining the faculty of Trinity College Theological School and sharing in its commitment to excellence in theological education and formation in our Anglican tradition,” Rachelle says. “I look forward to sharing with our students my passion for the incredibly rich but often challenging literature and theology of the Old Testament, discussing and discovering its ongoing relevance for issues in our wider church, community and lives today.

Fergus and Rachelle are outstanding additions to the faculty at Trinity College Theological School, teaching within University of Divinity programs as well as contributing to Trinity’s formational activities for the Diocese of Melbourne. They begin their new roles in February.

AM for career in theology