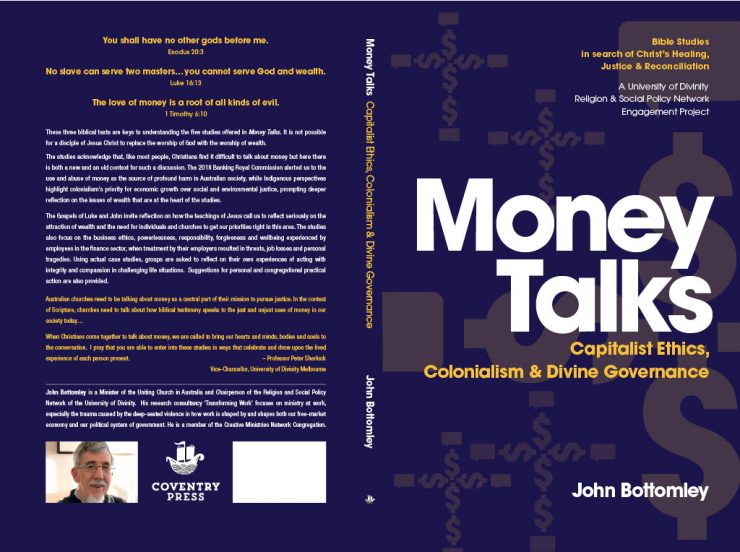 Interview with John Bottomley about his new publication, “Money Talks”

John Bottomley is Chairperson for the Religion and Social Policy (RASP) Network at the University of Divinity, which brings theological insight into contemporary world issues and social policy debates. He is also Director of Transforming Work, which supports individuals and organisations to engage holistic responses to today’s complex challenges.

John spoke to VOX about his new book, Money Talks: Capitalist Ethics, Colonialism & Divine Governance. It is available for purchase via this order form. 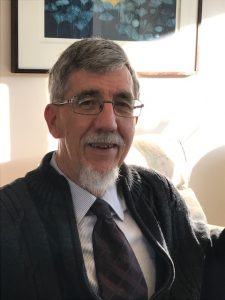 John, why do you think money has become a taboo topic of discussion in Australia?

Talking about money is perhaps the last social taboo for Australians. It’s quite widespread in our society that we don’t talk about money, because if we don’t have much money we are ashamed, but similarly, people who do have money and are using it unfairly have some sense of shame or guilt about exploiting their position.

The purpose of a taboo is to hide the truth, it’s to hide the reality of something. The taboo is a way of stopping people talking about their experience of being exploited. So, Money Talks aims to help us talk about money because the secrecy around the use and abuse of money is the source of profound harm in Australian society.

How can theology and the church play a role in modern ethics about finance?

That was actually the central question that got me started on this journey and the Religion and Social Policy (RASP) Network.

When the Banking Royal Commission (2017-2019) released its interim report, the Commissioner said that the chief cause of all the misconduct that they had seen was due to people’s greed. When I looked closely at what he meant when he was talking about greed, he was talking about people taking too much – more than they should.

The biblical understanding of greed is quite different. In the Scriptures, greed – or covetousness – is an action that harms your neighbour. Commandments about greed are actually about the wholeness of the community. But in the Royal Commission, greed was about individual misbehaviour and there’s no social responsibility being addressed and so that’s part of our critique of the Royal Commission and the lack of accountability for injustice.

The faithful often use Scripture for personal reasons but consulting it about finance might be a new idea for many people! How can scripture aid us in issues of finance?

Our Christian tradition in the West has often been individualistic and focused on personal morality, and that plays into the taboo about finance. But the feminist insight that “the personal is political” is also a very biblical insight. The Scriptures do not separate the personal and political in the way Western culture has done which is essentially a patriarchal way of looking at the human being which divides or compartmentalizes spheres of life.

Many of the studies in Money Talks focus on passages from Luke’s gospel. Why do you think this issue was such a focus of this evangelist?

I think that Luke is essentially drawing on the importance of money and how it’s treated because that was Jesus’ central teaching. Jesus stands in the prophetic tradition of Jewish thought, which is very much concerned with abuse of wealth by kings and leaders and all manner of people and how that’s essentially degraded society. Luke helps us to read Jesus as being aware of the sort of evil powers that may work in religion, and in the state and, and also particularly in relation to money.

The first three or four chapters of Luke are so central; the people who come to Jesus birth, the people who see his birth or witness his birth, the Magnificat hymn, they’re all pressing hard on a narrative of reversal; “The Lord has brought down the powerful from their thrones and lifted up the lowly; he has filled the hungry with good things, and sent the rich away empty” (Luke 1:52-53). That’s going to the heart of the Greco-Roman understanding of importance and status. So status is tied to wealth and it is tied to patronage and you can see that in Luke it’s embedded in the ministry of Jesus to reverse that.

The other thing that stands out for me is Luke has a particular awareness of the Roman Empire. The role of the Empire is never silent in the background, and Luke reads it with a sense of both foreboding but also opportunity. Luke helps us to see that it’s not money itself, but it’s our attitudes to money, that’s the key – there’s some joy in the stories of money being used generously or giving away money. The right use of money to create hospitality is also valued in Luke – it’s not a “money is bad” equation, it’s far more nuanced.

How do you hope Money Talks will be used?

The book is written for laypeople. I wrote the book with my own small congregation in mind, intending it to be very accessible. Within the book there’s a set of practical questions for people to think about, alongside thought-provoking concepts about capitalist ethics to bring out the point that there is an ethic in capitalism that needs to be challenged. I think it’s really time for individual Christians and churches to be thinking about our investment policies and who we are investing in.

The scripture readings are all taken from the Lenten series of gospel readings for the year C of the Revised Common Lectionary, which happens to be this year (2022). It’s not only a Lenten study, it can be used at any time, but I would be delighted if it can be available for churches to use as a Lenten study. I think it will set up people for reading Luke through the whole year, and that they’ll be enlivened to the messages in Luke that relate to money and status.

Money Talks: Capitalist Ethics, Colonialism & Divine Governance is now available for purchase via this order form. You can also register to attend the book launch on Monday 28 February 2022.