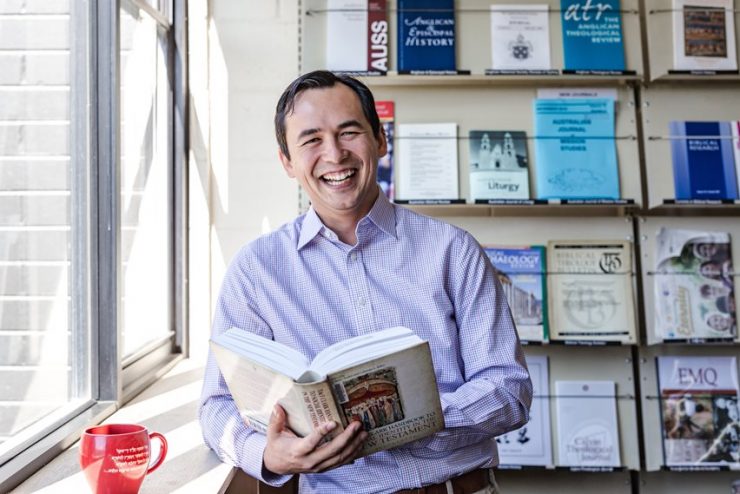 Dr Chris Porter: a man of many talents

Dr Chris Porter is a fascinating mosaic of different interests, passions and pursuits. Of course, as one of our Theological School’s newest postdoc research fellows, academia takes centre stage.

‘My doctoral research looked at how Social Identity Theory – a model of how individuals and social groups interact on the basis of their group membership – can illuminate the social dynamics of the Gospel of John and other Jewish literature around the time of the destruction of the Jerusalem Temple in 70CE,’ says Chris, trying to succinctly explain his fascinating yet complex field of research.

‘But more broadly,’ he adds, ‘I’m interested in looking at how identity is formed through narrative, and how our practices of storytelling can inform how we may helpfully engage with ourselves and our world. Some of this is informed by my own adoption and transcultural experiences.’

Chris’s own story is rich and varied. Born in Canada, he was adopted into an academic household in Canberra. Something of a polymath, Chris’s tertiary education allowed him to explore a whole network of ideas and possibilities. Though spirituality was a big part of his life growing up and would shape his future career, he began his studies with an engineering degree with the hope of becoming a motorsports engineer.

‘Throughout the years, I have been involved in motorsport of various kinds, from crewing for friends, to building and racing my own cars,’ says Chris. ‘Some friends joke that I find the process of building a car more cathartic than actually driving it.’

Although a lifelong passion, Chris’s path quickly diverted towards a dual degree in psychology at ANU and software engineering at the University of Adelaide.

Following his undergraduate studies, Chris worked in research for several years with the University of Adelaide, first on human decision-making in the School of Psychology with the Memory and Language Learning Lab and then complex networked environments at the Teletraffic Research Centre in the School of Engineering Maths and Computer Science.

Delving further into the limitless well of learning opportunities, Chris also pursued initial studies in theology, which culminated in him leaving Adelaide for Melbourne to study at Ridley College.

‘Through the twists and turns of those studies I was encouraged to complete a PhD, where I looked at social identity formation in the Fourth Gospel,’ he says.

Obviously not one to do things in half measures, Chris decided to become ordained as first a deacon, and then a priest. The latter, however, was a decision 10 years in the making.

‘After almost a 10-year hiatus I was encouraged to explore ordination again, this time in the Melbourne Diocese,’ says Chris.

‘I think the 10 years between the two moments of considering ordination was of immense personal and spiritual benefit.’

Now, as he heads into his postdoctoral research fellowship, Chris is looking forward to finally becoming a ‘proper’ part of the Trinity community.

‘I have always been impressed by the generosity of the Theological School, and the warm engagement across a broad theological range. I am looking forward to continuing to engage with the school’s vision to prepare students for the reality of the diversity of the modern church.’

With such a full plate, Chris’s ability to juggle so many physical and mental tasks at once, not to mention being married with two young kids, is nothing short of remarkable.

‘One of the ways that I help myself to think clearly is to keep up some solid hobbies outside of my research,’ says Chris.

It appears that it’s not just building motorcars that gives Chris this mental clarity.

‘I have returned to craft brewing after not having brewed for about 14 years,’ says Chris. ‘The process is cathartic and almost meditative – to force yourself to slow down and invest in the end result. There is no rushing these sorts of processes.’

Words to live by.

“Much Ado About Nothing”, Professor Mary Coloe’s Plenary Paper

Call for papers on ‘Spirit of the Commonwealth: Leadership, Religion and International Order’

Mary in the Christian Tradition

‘It is good’: a reflection on land, healing and hope

The Gospel According to Luke

Consumer protection and the National Code