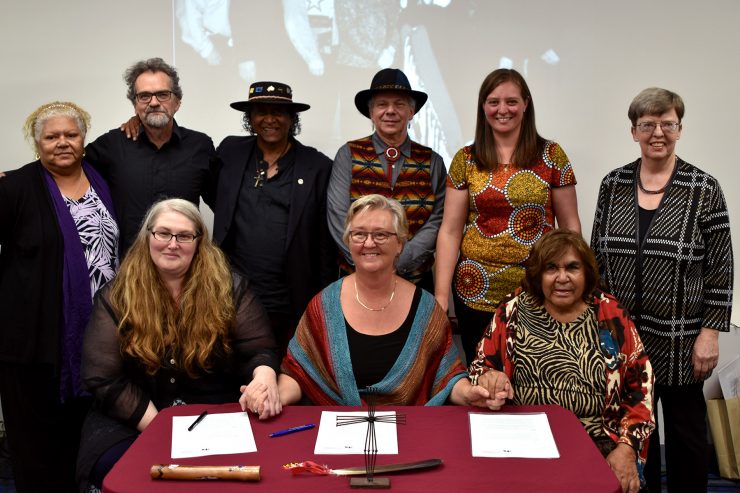 Kaylee Payne, 9 April 2019
This article was originally published on Eternitynews.com.au

Uncle Ray Minniecon, an elder statesman and Aboriginal pastor from Sydney, has knocked on the doors of Australian theological institutions for more than 15 years, asking for a way to teach theology from an Indigenous perspective. This week, his prayers were answered.

New research study options offered through Whitley College and the University of Divinity, in Melbourne, will allow students to study theology through Indigenous eyes. The colleges have signed a memorandum of understanding with NAIITS, formerly known as the North American Institute for Indigenous Theological Studies, a global organisation seeking to create culturally sensitive theological learning opportunities for the world’s indigenous communities.

“This is our opportunity to study the ways of our Creator through our cultural eyes.” – Ray Minniecon

NAIITS postgraduate-level units have been taught at Whitley College, a Baptist institution in Parkville in inner-city Melbourne, since 2017. New research options, including a PhD track, will be offered from this year.

“This is our opportunity to study the ways of our Creator through our cultural eyes,” says Minniecon.

“We need Aboriginal people who can think clearly about who we are and how we think about our Creator, how we see that through Scripture and also through history. We need to be able to do that ourselves.”

Minniecon says the new study options for “his mob” are a heavy responsibility as he goes about “making sure what we offer our people from a biblical viewpoint fits into our culture and traditions and also makes sure that the message of Jesus is relevant to our people in a deep and profound way.”

“For a really long time, he has had the door slammed in his face, or the door not opened at all.” – Naomi Wolfe

Naomi Wolfe, an Australian Aboriginal woman, lecturer at Australian Catholic University and a NAIITS board member, told Eternity that Aboriginal and Torres Strait Islanders are “indebted” to Uncle Ray for his years of agitating for more theological training opportunities for his people.

“For years, [Uncle Ray] has been knocking on the doors of Bible colleges saying, ‘We have this calling, we have this gift that we want to give back to the church, we want to equip our own mob – will you help us?’ And for a really long time, he has had the door slammed in his face, or the door not opened at all. He’s gotten close to an agreement, and then it didn’t happen. So you can imagine what a momentous occasion Saturday was, that there is an institution saying ‘yes, we’ll walk alongside you and make this happen. Yes, we believe in you.’ It’s the culmination of a really long journey.”

Wolfe adds: “To our knowledge, nowhere else in Australia is offering postgraduate level study in theology through an indigenous framework.”

Nungalinya College in Darwin offers culturally relevant, theological courses at a VET (Vocational Education and Training) level. Wolfe says with this agreement, the full spectrum of theological education from an Indigenous lens is on offer.

“I think these study options will allow space for people to explore questions like: ‘How can I be fully authentic as God has called me as an Aboriginal or Torres Strait Islander and how can I be a fully authentic Christian? What does theology mean to me as an Indigenous person living in contested lands in Australia?

“It’s the culmination of a really long journey.” – Naomi Wolfe

“We’re hoping that our mob will get practical and theological skills but also that those who come and study will have doors opened to them that have been denied to them historically because they haven’t got paper qualifications, despite having years of experience in ministry.”

Wolfe says she has seen many instances where Aboriginal and Torres Strait Islander people have been unable to study at Bible colleges or be appointed as pastors or be ordained because of a lack of paper qualifications.

“We want to approach theology as we are, rather than setting that aside and teaching theology from a purely Western lens.” – Naomi Wolfe

“That’s despite them having years and years of ministry experience,” Wolfe says. “It’s those instances where the Indigenous and non-Indigenous world sometimes clash.”

Both the coursework units and research options will be co-taught with Indigenous theologians and academics from around the world. Wolfe stresses that the courses have been developed to satisfy Western academic requirements, “with all the academic rigour required of any other masters or PhD study”.

“We’re actively saying to students, ‘You come with your own forms of knowledge and your own forms of understanding and we as Indigenous practitioners and theologians also do that … and we want to approach theology as we are, rather than setting that aside and teaching theology from a purely Western lens.”

Wolfe says she hopes the research that comes from these new study options will make a contribution not only to the Indigenous church but the wider church in Australia.

“We hope it will contribute to conversations in a church that is struggling with reconciliation, and often struggling to understand even the basics of Aboriginal and Torres Strait Islander culture.”

Exploring Indigenous Theology as a Bridge for Moving towards Reconciliation