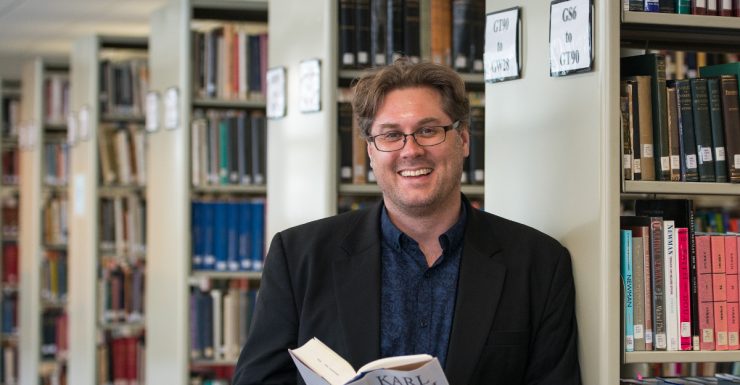 Reverend Professor John Flett was recently appointed a Professor of the University of Divinity and will be giving the Inaugural Professorial Lecture at Pilgrim College on the 18th of May. For more information about attending John’s lecture, “The Newness of the Gospel: Difference as Catholicity”, please click here. He was interviewed by Pilgrim Theological College about his academic career and current research (originally published here).

What is ‘missiology’ and what are some of the current issues being debated in the discipline?

I suspect that there will be as many answers to this question as people answering it. For me, missiology is foremost the study of who God is and so the nature of the Christian community called by this God. As God’s movement to us in Jesus Christ is not secondary to who God is in Godself, expressing instead God’s own perfection, so the Christian community finds its identity in moving beyond itself, not as something secondary to it, but in its calling in the power of the Spirit to follow Christ and him crucified. The theology of mission reflects on this movement and the identity grounded in this movement.

When asked about current issues, one needs to ask ‘current for whom?’ In societies marked by some degree of Christian heritage, issues of secularization, decline in church membership, migration and hospitality, the rise of religious pluralism, and the established tradition in relation to new ecclesiologies dominate. Within ‘non-Western’ Christianity, apart from the question of different methods, the central concerns are cultural identity, including the relationship to the religious past, exorcism, healing, AIDs, poverty, liberation, church structures, pneumatology, to name but a few.

You published The Witness of God: The Trinity, Missio Dei, Karl Barth, and the Nature of Christian Community. What was your governing argument in this work and what has been its contribution to missiology?

The argument might be simply stated: God is in and for Godself missionary. The question then becomes, what does missionary mean? That is, we define mission from who God is, not from some phenomena occasioned by an historical accident external to theology itself (such as the discovery of other lands). Though the issue of contribution is something better judged by others, I hope that the work advances in some small way the theological ground of mission and, by extension, its place within the church as the eschatological people of God.

Your current position is at the Institute for Intercultural Theology and Interreligious Studies, Protestant University Wuppertal/Bethel. How has this appointment influenced your recent research?

I have lived and worked now in five continents. Every time I have been struck by significant difference in areas of concentration, method, and authorities. As one simple example, while ‘contextualization’ looms large with the English-language conversation, it is a theoretical concentration absent from the German-language discourse. Why this might be the case is an interesting question. If one might make an overstatement, mission studies in the Anglo-American world trended in the past more toward the pragmatic and historians dominate today. Germany, by comparison, focused more on theology and a certain understanding of culture, and today works with hermeneutical theory and the social sciences. This is reflected in the method of “intercultural theology” which dominates the discussion here, but which remains largely unknown within English language missiology.

A second point I would make concerns the need to do everything in a second language. This is quite a humbling experience, for, while one might think complex thoughts, they are of no use if one cannot express them (I have become adept at hand-signals and stick-figure blackboard drawings). Plus, one enters a different culture, different history, and different set of often unspoken rules. This displacement I have found most beneficial both for my research and my teaching because it strips you of certain securities, exposing past authorities and patterns of discourse, while drawing you into new and ‘alien’, but nonetheless faithful, theological forms.

What is a Habilitation?

Overly simply stated, whereas universities in the English-language tradition have different academic grades and the institution evaluates an individual’s standing, in the German-language tradition a professorship is an earned qualification – an Habilitation. This second doctoral degree differs from a PhD in two respects: first, the expected quality is higher, and second, it is an independent work (i.e., not supervised). The theme of the written work, the ‘Habilitationsschrift,’ needs to be on a theme sufficiently different from the PhD dissertation to demonstrate competency across multiple fields. Likewise the ‘Habilitationsvortrag’, the official lecture, must differ in theme from the PhD dissertation and the Habilitationsschrift. Upon completing the Habilitation, one receives the venia legendi, a Latin phrase meaning ‘permission for lecturing’.

My Habilitationsschrift dealt with the theme of apostolicity. It set the question of stability and order, and so the questions of bishops, structures, and historical continuity, within the context of world Christianity and the gospel’s cross-cultural transmission and appropriation within different histories and contexts.

You are a New Zealander, ordained a Presbyterian Minister in the USA and now living in Germany. Can you tell us your story?

It is difficult to know where to begin. In New Zealand, I worked for close to a decade with the DeepSight Trust, which was an offshoot of the Gospel and Our Culture Network associated with the name Lesslie Newbigin in the UK. During the course of this I began to develop concerns regarding the theology of missio Dei, or the grounding of mission in the Trinitarian being of God. The general theological direction was fine, but once one started to scratch the surface, it became apparent that the theology was not (in my opinion) well developed. This led me to undertake a PhD on the topic and its relationship to Karl Barth’s doctrine of the Trinity at Princeton Theological Seminary under the supervision of Darrell Guder.

After this I took up a post at Presbyterian University and Theology College in Seoul, South Korea. One must be ordained to teach theology in South Korea, but I could not be ordained within the Korean church because one must do one’s basic degree at the church’s own seminary. So I began the process in America, first through Stone Hill Church of Princeton, and then with Shenango Presbytery of the PCUSA. I am incredibly indebted to both these communities. Living and teaching in South Korea presented a rather large learning curve for me as it challenged much of what I thought I knew regarding how knowledge is processed, the nature of truth, the role of culture and history in church and academic structures, the manner in which our theories of contextualization impose certain expectations on the discussion.

Working with the Kirchliche Hochschule Wuppertal/Bethel, and with Prof. Dr. Henning Wrogemann in particular, presented an opportunity to focus on some questions which had become apparent to me while in Korea. Thanks to the Institute for Intercultural Theology and Interreligious Studies and to the United Protestant Mission, I was able to spend some time at the Université Libre des Pays des Grands Lacs, in Goma, DRC. I have also had the opportunity to serve as a minister here with the Evangelische Kirche im Rheinland (Elberfeld-Nord) with Pfarrer Dr. Hermann-Peter Eberlein. These, in many ways, contrasting experiences embodied well for me the tensions within which world Christianity is located today.

What are your current research plans?

My Habilitationsschrift is finished and should be appearing sometime in 2016. I am working on a manuscript with Henning Wrogemann dealing with some of the central constructive developments in the past century of German mission theory. I have a few essay projects on the go, one of which is a general introduction to ‘intercultural theology’ for an English-language audience. My main goal in the next five years is to write a constructive introduction to the theology of mission, one which sets established theological loci in conversation with the central concerns of world Christianity.