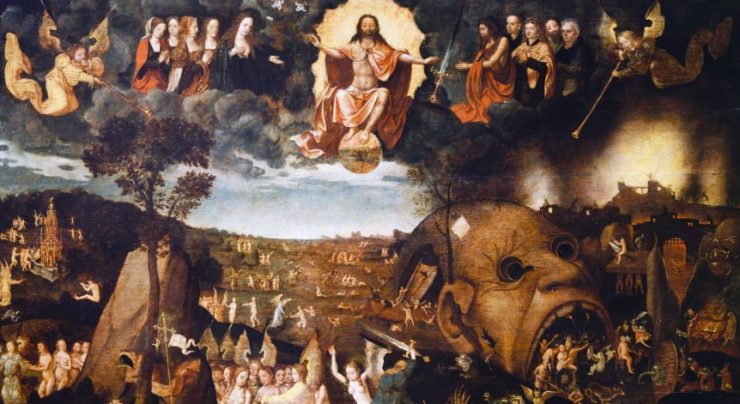 From unprecedented bushfires over summer to the global spread of a deadly pandemic, 2020 has felt “apocalyptic” to many.

And while the term apocalypse is used liberally today, it is actually derived from the Greek word for “revelation”, and refers to the unveiling of prophecies.

It’s a common theme in Christian, Jewish and Islamic writing, and for many religious people across the world, the “end of days” isn’t a Hollywood concept, but rather a truth that is yet to unfold or — in some traditions — a time that is already upon us.

But unlike apocalyptic zombie films, religious apocalyptic texts were created not only to scare, but also offer solace.

And as the COVID-19 pandemic intensifies, some religious scholars say that thinking about the apocalypse could offer everyone — agnostics, atheists and theists alike — some semblance of hope.

The apocalypse has its roots in the Jewish tradition, says Anglican rector and author Michael Jensen.

“It arose because the biblical promises to the people of Israel in the Old Testament talked about a time when the king would be established on the throne in Jerusalem, and when God would be living in the land,” he explains.

“The trouble was is in history this only happened for a moment, when King David was on the throne, about 1000 BC, but then Israel was overrun by enemies.

“So, the apocalypse says that what is needed — in order to bring about God’s purposes — is not a revolution from below, but God coming down from above to establish his rule through his king in his place.”

“There’s a lot of flexibility in the [apocalyptic] images, rather than, ‘This is a timetable of what is going to happen,'” explains Dr Holloway, a scholar of classical Hebrew and biblical studies.

He gives an example from the fourth book of Ezra, written in about 180 AD, which describes a military messiah coming to Earth.

“He defeats the Romans, who are the oppressive power, and he gains a period of messianic rule, when it’s an ideal time on Earth, but then he dies, and everybody dies,” he says.

Dr Holloway says many of the major Jewish apocalyptic texts were penned by authors under oppressive, imperial rule.

“It’s a way of them imagining a future where the empire has been dealt with by God, and ordinary people can then go to a glorious new future,” he says.

“Even though they’re scary texts to read, in the context they were meant to encourage people that their terrible situation in the present would be righted in the future.”

Despite the early tradition of Jewish apocalypticism, Dr Holloway says there’s little focus on the end of days in the practice of modern Judaism.

“Having been burned by false messiahs, most Jewish groups feel reluctant to engage in that sort of speculation,” he says.

‘The end has started’

For Christians, however, that prophesised messiah is Jesus Christ.

“Christianity is essentially apocalyptic, because it talks about the reign of where and when Jesus is going to rule,” explains Reverend Jensen.

“Jesus himself used this type of talk … he uses very dramatic symbolism about the darkness and earthquakes, and terrible times and signs of trouble before God establishes his rule.”

According to Reverend Jensen, Christians believe the death and resurrection of Jesus — the events of Easter — signalled the coming of God, and hence, the start of the end.

“The 2000 years since is an age in which the end is coming. The end has started but it hasn’t finished,” he says.

But as the exact end date is unknown, Reverend Jensen says Christians throughout the ages have drawn parallels to their experience of hardship and the forthcoming apocalypse.

“For most mainstream Christians, whatever time we’re in, there are earthquakes, there are wars, there are plagues and famines … it’s perpetually a sign that we’re in that time.”

And for Dorothy Lee, Stewart Research Professor of New Testament at Trinity College Theological School, this sense of impermanence puts the responsibility of caring for others, and Earth, on us.

“Ethics is very important in apocalyptic thinking,” she says.

“The biblical apocalypse says that to prepare for the end of the world, we need to live lives of justice, integrity, compassion and goodness — not just for the poor, though it is largely, but also for the planet itself.

“I think there’s a good chance we will destroy this planet — it’s coronavirus which we’re all panicking about now, and it’s understandable — but what’s more serious is the situation of the environment.”

Plagues, earthquakes and the Antichrist

David Cook specialises in researching and writing about Muslim apocalypticism at Rice University, and he says both Sunni and Shiite traditions feature predictions about the end of the world.

“During the medieval period, Islamic scholars assembled what are known as signs or portents of the hours into two groups,” he explains.

“[These were] lesser signs of the hour, which were basically moral in nature, and greater signs of the hour — things that are very incontrovertible … such as the appearance of Antichrist, Jesus returning to Earth, the rising of sun from the west.

“There are plagues that are specified, among other things like earthquakes and cosmic events.”

Dr Cook says while Muslims may not believe every apocalyptic prediction, they must believe in the coming of the last day.

He says given the Muslim apocalyptic tradition is broad, there are always events in the contemporary world that could be related to the classical material.

“The time where they become actually dangerous or convincing is not when there’s one particular portent that’s being fulfilled … but when there’s what scholars refer to as ‘triangulation’ — when two, three or four [predictions] are apparently being fulfilled,” he says.

For example, Dr Cook says there was some apocalyptic fervour when IS took over the Syrian town of Dabiq, as it was mentioned in apocalyptic predictions as being a “sort of Armageddon site”.

“There was a wave of excitement concerning that issue, which gradually dissipated by about 2016- 2017, when IS actually lost physical control over Dabiq,” he adds.

Comfort in the time of coronavirus

Dr Cook comes from an evangelical background, and sees parallels between how that tradition and Islam interpret their apocalyptic texts.

“When you read the apocalyptic material … there’s no real sense that it’s trying to herd people into hell, it’s actually the opposite,” he says.

“God is trying to say, ‘Hey, watch out for this stuff.’

“On the one hand, they’re definitely trying to scare you into repentance, but there’s also a strong sense of giving the believer hope and, I think, that there’s a sense of solace.”

Reverend Jensen agrees that apocalyptic texts can offer comfort in the time of coronavirus.

“The apocalyptic teaching in the New and Old Testaments was always a good news story — a warning — and the things that are going around us now are a warning,” he says.

“What they’re telling us is the human beings aren’t as in control as we think we are — the environmental crisis is telling us that, too.

A Lament for Holy Week