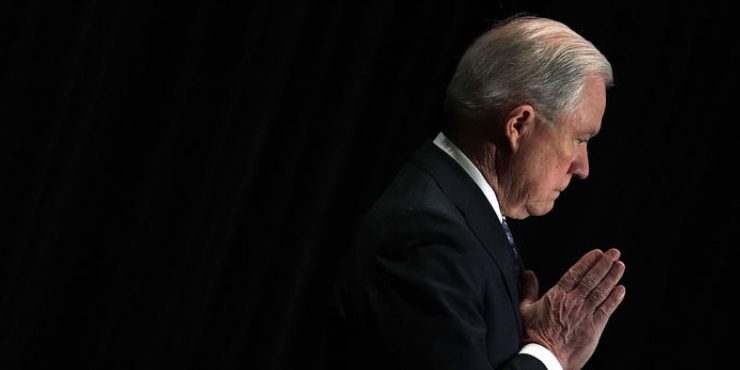 The Bible and Borders: Does Scripture Belong in the U.S. Immigration Debate?

Refugee week in Australia sees us dealing with all-too-familiar challenges on the policy front. But in the United States, a new kind of controversy has exploded into the media.

The U.S. Attorney General Jeff Sessions provoke a storm last Thursday when he defended the administration’s policy of taking children from illegal immigrant families on the basis of a New Testament text, Romans 13, which appears to sanctify all state authorities.

Press Secretary Sarah Huckabee Sanders also thought it worth mentioning that: “It is very biblical to enforce the law.”

The responses to this draconian policy have multiplied exponentially, extending even to learned exegesis of the letter to the Romans published in The Independent.

An historically minded response from Lincoln Mullen in The Atlantic suggested: “what the attorney general actually has on his side is the thread of American history that justifies oppression and domination in the name of law and order.” Invocations of Romans 13 famously supported the Fugitive Slave Act in 1850, for example. Defenders of slavery at the time could cite a number of biblical texts on their side, but not this one: “Slaves who have escaped to you from their owners shall not be given back to them” (Deuteronomy 23:15).

Abolitionist David Walker took an entirely different approach to biblical interpretation by invoking the exodus narrative as a whole – linking the American slaveholders to an oppressive Egyptian government, and enslaved African Americans to the Israelites.

Ironically, this abolitionist approach to the Bible had much in common with earlier biblical debates around the American Revolution. On the one hand, loyalists favoured submission to the divinely legitimated authority in London, whereas American patriots rejected interpretations of Romans 13 that rendered it a protection for tyrants. These patriots could take comfort from an even older Catholic view expressed by none other than St. Thomas Aquinas: sedition is always wrong, but resistance to tyrants is not actually sedition, since a government’s job is to protect the common good.

When it comes to questions of immigration, searching for particular biblical verses turns out to be similarly hazardous. Theological supporters of hospitality are inclined to cite a string of biblical verses that lend support to “immigrants,” or in the antiquated English translations, “sojourners” (see, for example, Exodus 22:21; Leviticus 19:34; Deuteronomy 14:29; Jeremiah 7:6).

But a conservative scholar like James Hoffmeier knows these texts in the original Hebrew, and he wants to insist the stranger here is more precisely a ger – a dependent stranger who is more like a resident alien under American law, whose arrival has been sanctioned by the appropriate immigration authority. So now we are back to Romans 13 and divine sanctions for government. All governments? The suggestion seems ludicrous.

But does God love democratically elected governments? Most notably, John Milton thought that the so-called “divine right of kings” was a furphy. He was especially attracted to texts in the Hebrew Bible endorsed the “voice of the people” as long as a government did not transgress basic principles of justice. Milton was part of a debate about the “Hebrew Republic,” a conversation that informed the rise of democracy in England.

The implications of all this will be obvious to many, but obvious in quite different ways. Left-wing Christians regard Sessions and Sanders as simply irrational, and now it seems that many “evangelicals” are coming out against the latest policy on the southern border as well.

Unfortunately, the political reality is that the U.S. administration has apparently enjoyed significant support from white evangelicals. The United States government doesn’t need scholars of religion to provide them subtle lessons in theological argument if their marketing is, for the time being, still working.

In the current climate, critical discussion of theology is vital. Declaring religion irrelevant to politics, or declaring it unfit for serious academic enquiry, only stokes the fires. Among the serious questions worth debating would be how to foster genuine argument – and, in particular, how to grow the public conversation beyond the tired binaries of left and right. The lives of refugees and immigrants are hanging in the balance.

This article was originally posted by ABC Religion and Ethics on 20 June 2018.

Professor Mark Brett teaches Hebrew Bible and ethics at Whitley College and is in regular demand as a Higher Degree by Research supervisor and examiner. His work is concerned with the intersection between religion and politics in contemporary Australia and the South Pacific, and the lifting up of indigenous theological voices.