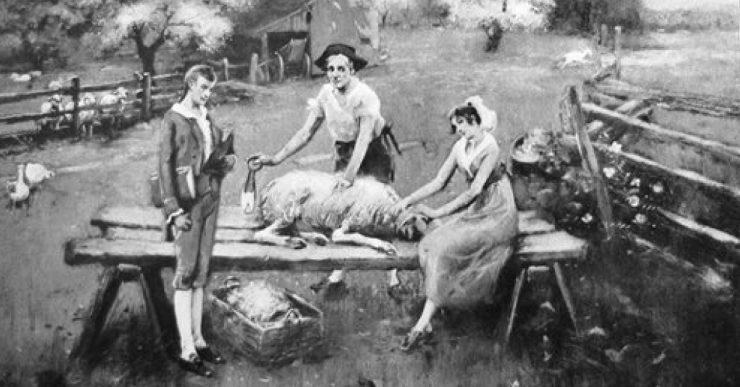 At the end of the Christian year we celebrate the feast of Christ the King.

The Old Testament reading in many churches comes from Ezekiel 34:11-16, 20-24 and focusses on the way in which God looks after his people, just as the Good Shepherd passage in John 10:11-18 does.

The verses taken from Ezekiel, with their focus on what God does, risk muting (how that has become a popular verb thanks to Zoom) what Ezekiel was concerned about…

If you have a moment, go and read Ezekiel 34:1-10 and you will quickly see it is a ringing denunciation of Israel’s political leaders, who have exploited those in their care for self-gain. The passage suggests a degree of excess, but sometimes leaders are more circumscript in their use of power to exploit. The emperor Tiberius, according to the not-always reliable Suetonius, was reported to have told his tax-collectors: “It is the duty of a good shepherd to shear his sheep, not to skin them.”

It is important that we remember that any ideas about God or Jesus which we have should be anchored in the political life of their times. By all means, let us use these images to shape how churches should be governed, so that even the highest church leaders may be held to account. Ordination to the priesthood or episcopate, has, tragically, never guaranteed immunity from the human tendencies for corruption, bullying or abuse. One would have hoped otherwise given our founder’s example.

But let us not limit teaching of Scriptures to the church, and the church alone. There is, after all, a reason why our political language talks of public service and the civil service. It is because these are primarily roles in which elected representatives and non-elected officials alike are meant to serve. The names really say it all, don’t they?

And yet, year after year, we see our public servants behave in ways which belie their titles. How often do we think cynically of a career in politics as a way to being, to quote from Douglas Adams, “on the gravy train for life”.

There are other ways…The Romans revered Cincinnatus, a hero of their Republic, who lived quietly on a smallholding, and took up public office to defend Rome against military aggression. When the job was done, he went back to his farm.

We might turn to more recent events for a reminder of the need to think through what political service means. Compare the ways in which many of our politicians leave office, to juicy pensions ad directorships, or even cling desperately to power, with the following quotation about the late Julius Nyerere of Tanzania in the 1980s:

“That he retired from politics with nothing more than a second-hand tractor and a bicycle showed that as President he neither dipped his hands into state coffers nor private pockets. Nor were his hands covered in anyone’s blood…”

Christ the King and Ezekiel set the standard for those who would be our leaders; people like Nyerere, that it is still attainable.

Some Indigenous women theologians that you should know about