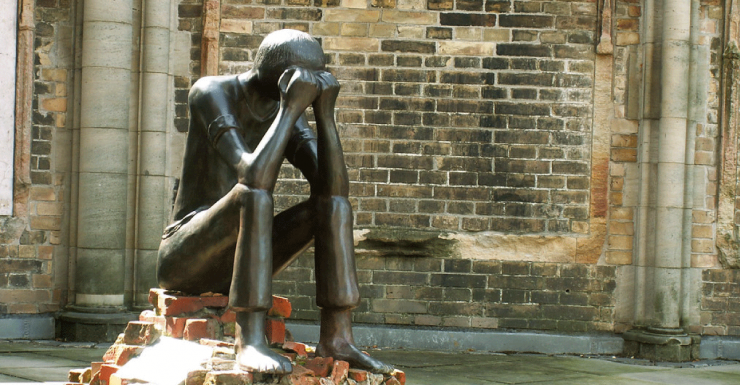 During the summer of 1944 – 15 months into a 2-year imprisonment that would end in his execution in the Flossenbürg concentration camp – Dietrich Bonhoeffer told his best friend that the world had reached its adulthood and that it was time now, even (especially!) for Christians, to live ‘etsi deus non daretur’ – ‘as if there were no God.’

Long misunderstood by both his admirers and his critics, Bonhoeffer’s comment has often been incorrectly interpreted to mean that modern society has no more need of a God-concept, and that the Christian faith – if it is to survive in any meaningful way – must return to the resources of the human spirit for its mission and ministry in the world.

But this is not what Bonhoeffer said, or meant.

In his letter to Eberhard Bethge in which this idea was first posed, Bonhoeffer went on to stress that, far from being a capitulation to atheism, when the Christian lives ‘as if there were no God’ she is in fact offering a Christological affirmation of the way in which God chooses to be with us.

‘Before God, and with God, we live without God.’

For Bonhoeffer, the Christian faith was rendered infantile and inconsequential, if it relied solely on a God who was nothing other than the omnipotent ‘help of last resort’. For far too long, Christian society, and the church within it, had treated God as though he were an all-powerful Solver of Problems, but one to whom the world might turn only when it had exhausted all its own capacities. God had been relegated to being merely the Deus ex machina of classical Greek theatre.

Against this, insisted Bonhoeffer, the God of the gospel is with us perpetually, in all of life’s ups and downs – not as the omnipotent Problem-Solver, to be sought when all other solutions have been tried and have failed, but as the One who lives with us in the solidarity of our weakness and aloneness; who lives with us, precisely as a suffering and powerless God.

‘Only the suffering God can help us.’

What does this have to do with our current coronavirus pandemic? Simply this – that there have been signs recently that, at least in some parts of the Christianized world, God is still perceived in that infantile way so roundly repudiated by Bonhoeffer.

‘Jesus is my vaccine’ – said one protester in Harrisburg, Pennsylvania (20 April 2020).

‘The blood of Jesus will protect this church against this virus’ – declared a Perth-based pastor in mid-March.

Such declarations of divine power may sound triumphantly faithful – but they are exposed in all their hollowness by the tragic fact of a quarter of a million deaths worldwide.

No, God is not the ‘miracle cure’ for coronavirus, no matter how right it still is to pray for a cure. God is not some sort of Divine Prophylactic, the incantation to whom absolves us of the need to take responsibility for ourselves and others.

Much more potently than that, God is the One who journeys with us through the tragedies and traumas of this pandemic. Far from being a God who appears only in the final scene to solve our problems, while having been embarrassingly absent from us through all our heartaches beforehand, he is, on the contrary, the One who is constantly with us in our heartaches, sharing with us in our powerlessness and sufferings.

That may not be the image of an all-powerful God we might prefer at this time – because precisely in times of pain and anxiety, we tend to want an omnipotent Problem Solver. But that image of God is commended to us by neither history nor Scripture.

Rather, we are encouraged to live ‘before God and with God, without God’ – because the God with whom we live and commune is not only there, victoriously at the end, but is with us right the way through, as well.

Rest amidst the Unrest