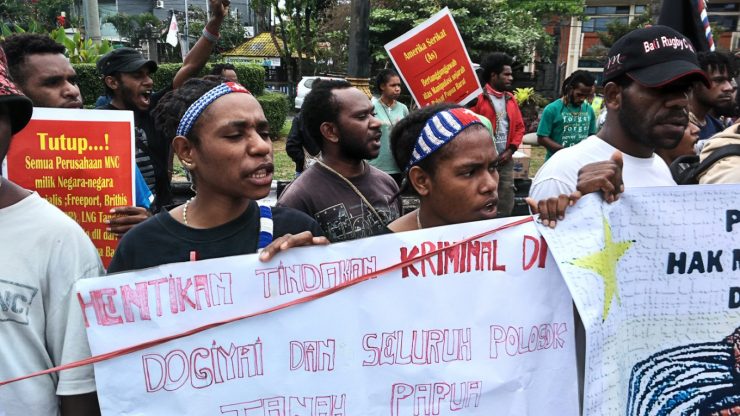 I spent the bulk of 2019 reading, researching and writing about a subject that I had hitherto never even heard of. In February, I moved to Melbourne, Australia, to continue a relationship with my Kiwi partner, and the very first day I ended up at a protest against the murder of West Papuans by Indonesia. As I stood there in the rain in front of the Indonesian consulate in Melbourne, with my backpack full of all my belongings, we were swept up in a call and response with the leader chanting, ‘Merdeka!’ And the two dozen or so protestors answered, ‘West Papua!’

The more I learned about West Papua, the more I saw the depth of suffering and struggle that the indigenous people experience. When the Dutch left the colony in 1962, Indonesia stepped in and has occupied the region despite countless calls for independence and self-determination by the native West Papuans. The protest I attended was sparked by allegations that Indonesia had dropped white phosphorous on a village in the highlands in December 2018. Dozens of reports by religious and human rights groups have documented egregious human rights violations. The psychological and physical effects of this double-colonisation not only reach across the island, but also persist in refugees who have been forced to leave their homeland.

A few weeks after the protest, I had been appointed an honorary researcher with the Religion and Social Policy (RASP) network of the University of Divinity, Melbourne, to provide theological resources to the West Papuan liberation movement. Through the months I spent speaking with West Papuans and activists, and reading about the country, I grew as much in humility as I did in my knowledge. What follows are a few of my reflections on the process of learning about, from and with indigenous West Papuans.

There are myriad potential pitfalls to intercultural learning that others have expressed far better than I can, but I would be remiss to entirely omit the turns I found perilous along the way. We gain a clearer and more stable path forward when we identify the boundaries or dangers in our work. In short, here are two things I have learned not to do.

The first mistake I made in reflecting on indigenous theologies was to approach differences in thinking as a ‘Columbus-like discovery’, a cutting phrase I plunder from Karl Gallinsky. (Perhaps, in this Pacific context, a ‘Cook-like discovery’ would be more apt.) The point being: indigenous theologies, when treated as a buffet to support, buttress or enrich a Western-entrenched theology, only serve the oppressive and destructive machinations of colonialism.

It is all too easy to point to, for example, indigenous spiritual connections to kin or land as a model for Western churches to follow, all the while ignoring the very present and material ramifications such a connection has for indigenous churches, communities and individuals. How easy it is to use indigenous connection to the land as an example in a sermon. How much harder it is to admit to wrongdoing (past or present), and harder still to move to make restitution or reparation.

A second pitfall I found myself falling into was to treat indigenous theologies monolithically. Certainly, one cannot get far without making some generalisations or categorisations, but within West Papua alone there are over two hundred languages with each tribe and even each family holding their own beliefs and spiritual customs.

Again, it is a colonising impulse to want to lump all those who are different together. To see and note the differences is perhaps just as important as seeing the similarities. There are no one-size-fits all cookie-cutters when it comes to theology or spirituality, for each human is created in the image of God, and God can be seen in and through each person. The diversity within the Kingdom of God is a beautiful thing. The path that follows Jesus Christ may be narrow, but it is not a single file line. A professor once described Christianity as a mosaic. And while that wide-angle view is helpful to see the mosaic as a whole, we must not forget that the intricacies of each stitch are beautiful in their own right.

After addressing these theological hazards, I found a clearer road forward. Perhaps the biggest positive claim about West Papuan indigenous theology is that God’s project of liberation is just as much material as it is spiritual. The in-breaking of the Kingdom of God into our world allows us to identify the Indonesian oppression of colonisation as wrong-doing or sin. And the Holy Spirit guides us in a prophetic imagination of what our world can look like when God’s peace and love are allowed to reign.

We are often so entrenched in a position to guard against a prosperity gospel that we over-inflate these dual converse claims: a) God’s favor is not demonstrated by material wealth or well-being; and b) material wealth and well-being do not necessarily signal God’s favour. Yes, these claims are true, but the very real and very material suffering that our neighbours in West Papua undergo refuses to allow us an out from dealing with the ‘flesh and blood’ of this world. The Indonesian-Malay word I found myself chanting at the protest in Melbourne, Merdeka, is a complex word that translates roughly to ‘freedom’. But the term encompasses more than freedom; it encompasses an idea of peace, justice and things made right. What kind of theology do we promote if not one that advocates for this idea of material justice? A theology that refuses to take into account the economic security of our brothers and sisters is not the theology of Ruth, David, Joseph, Stephen or Jesus.

The point of theology, in the end, is to help us to fulfill those two greatest commandments: love God with all your heart, soul, mind, and strength; and love your neighbour as yourself. We hear the voices of our indigenous brothers and sisters from West Papua crying out. When learning from, about and with any indigenous theologians, we must not stop at listening. We start by listening to our neighbour, but we don’t end there. A quote that has stuck with me comes from artist and activist Mark Menjivar: ‘We learn to listen better so that we can learn to live better’. So it is with theology. As theologians – academic, lay, or ordained – we listen to the voices of the other that we may better learn to live out a life of love for our neighbour.

Michael Toy is an alumnus of Wheaton College and Princeton Theological Seminary who has worked in Christian formation since 2013. Most recently, he worked as an honorary researcher working with West Papuans to provide theological resources to the liberation movement.