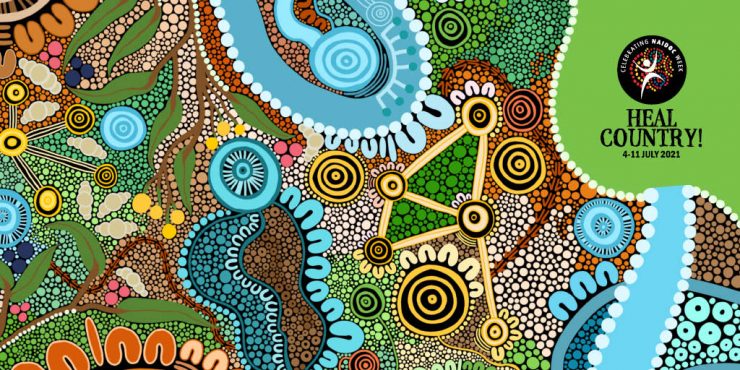 ‘It is good’: a reflection on land, healing and hope

Originally published by Tearfund Australia. Republished on Vox with permission.

The NAIDOC Theme for 2021 is “Healing Country”. Country needs to be understood as more than just a place. Country encompasses every aspect of an Aboriginal and/or Torres Strait Islander person’s life. When we think about caring for Country or Healing Country, it has to be holistic. It can’t just be a project to regenerate land or any activity with just “the land”. Country is more than just the physical place.

When we’re talking about Healing Country and climate change, I am reminded of people in places like the Torres Strait Islands and our neighbours in places like Tuvalu and Kiribati who are seeing first hand the sea rise. Year by year, they are literally seeing it because it is sometimes just metres from the door. They don’t get the luxury of saying “I’ll worry about it later”, because it is right there. We need to hear their experiences and stories as well as ways of helping.

We need a healed story. We also need to have healing that doesn’t forget the pain. A lot of people think that saying sorry means that you forget the pain, you just draw a line in the sand and move on. That’s not what healing means! Healing means that you can remember the pain, you can talk about it, you can share your experience with other people, but it is no longer a living festering sore. The pain is part of your identity but it’s just one part. It’s not the defining part of your identity.

If God is the Alpha and Omega, then God has always been everywhere. So why wouldn’t God be here in Australia? You have theological wrestling to do if you say that this was a godless place, and that Aboriginal and Torres Strait Islander people were heathens. It’s unfortunately a view that was repeated against Indigenous peoples across the world.

In doing this we can relearn what God’s creation benediction, “it is good”, actually means. It will take time and it will take willingness, but I think there is a way that we can learn that “good” is not necessarily a material status in life. “Good” is not a label to wear. We can learn that good can be recognised and it can reside in people that you may not have previously recognised as good. Good can be recognised as a gift from the Creator to all of us and that there is good in us.

For many generations, Aboriginal and Torres Strait Islander people were told that they were inherently bad, they weren’t “good”. This influenced a lot of laws, policies and practices that were incredibly damaging. We need to rethink what these labels “good” and “bad” mean. How do we use them to build relationships? How have they been used to exclude people? Who gets the right to apply these?

One of the greatest things that the Church has forgotten is that Creation is a gift, that stewardship is a gift. The church has got caught up with a very distasteful way of seeing the world. The western mindset desires a mega church, mega institutions, mega missions and everything on a large scale, without thinking about whether it is necessary or not. Is this the best way to care for creation? Is this the best way of living out the Gospel’s values? How do we take our place within this creation? How does desiring and seeking out bigger and better form sustainable relationships with everything around us that honours our Creator, and joins with all of Creation in blessing?

As I talk around the country, I sadly see a lot of instances where the Church is more concerned about being seen to do something than actually being a means for heir congregations to be carers of God’s creation. The Creator sees through this! We see through this! This kind of behaviour leads to dis-ease – not healing and wellness. What does it mean to stand alongside God’s creation and examine some of the excesses in our life that we don’t need that are causing damage to other parts of creation?

Do I need to upgrade my iPhone every year because the new one is out? Do I need to purchase as much plastic as I do? These are the questions that, while they might seem small and insignificant, make up our personal and collective responsibility to caring for Country and caring for creation. A mobilised church could still have a lot of power – and has a biblical basis for doing so.

If we believe that God is the Alpha and Omega, then we can come to see God was always in this country.

It is important for the church to understand that when Christianity arrived on these shores it was a very colonial Christianity. It came with a particular viewpoint of the world and of itself. This form of Christianity was not willing to listen to the creation stories of this land. If we believe that God is the Alpha and Omega, then we can come to see God was always in this country.

For many people, their experience of the Church has not been an invitation into this amazingly good place. Many have been told “You have fallen short. You’re not good but if you do x, y and z then maybe, just maybe, we will let you be part of this relational institution that we call church.” I am not so sure that that’s a great reading of the biblical texts. I’m not sure that that helps us see another person as a good gift to creation. If we’re always looking for the deficit in someone then we miss the good. Sadly, this is the lived spiritual reality of many – they have been alienated and isolated.

That has often been the nature of the Church’s relationship with Indigenous peoples since Australia was invaded. Indigenous peoples across the world have been seen through a deficit lens. This is really disabling and damaging and, as we know, it has caused incredible damage and is still causing incredible damage. If we could stop seeing each other through the deficit models, then I think we might see more of the good. If churches allowed space to truly listen, then they might hear something that sparks liberation in all of us.

Healing doesn’t mean that we forget. It means that we have a peace to fully move into that space of being we are called to be. When you have been a victim of something you can have healing but it’s still part of your life experience. Hopefully, we will get to the point in this country where we have healings of individuals, of communities, of land, of waterways, skies and of vision. This healing needs to be respectful to those who have come before and to prepare those who are coming after us so that we don’t repeat these mistakes. In this healing we will be able to tell our story, but not that festering kind of painful story that we often are burdened to tell at the moment. We see all over Country, the physical country and the communities, that there is incredible pain. Healing will mean that there’s peace and, hopefully, a commitment that those situations don’t happen again. That’s my hope and prayer.

We need to know who we are and know our story in order to write new stories, otherwise we will keep repeating old stories of disfunction, dis-ease and a destruction of Country. It doesn’t make sense when people are talking about reconciliation, or about Healing Country, when they don’t know who they are in that story. People need to ground themselves, locate themselves in their story, both the good and the bad, in order to move forward. We need to understand our part in the story before we try to work out how we want to see the future generations or how we envisage how we could make this place a little safer, a little more in line with what the Creator was hoping to achieve. Non-indigenous Australians need to know their location in the wider shared narratives of continuing colonial Australia, and the continuing Aboriginal and Torres Strait Islander nations.

We can have a Jubilee, a reset, but rather than Jubilee after Jubilee we want to stop that enslavement, we want to stop the captivity and the suffering. We need to do this! At the moment, none of us is fully free in Australia. We all have a burden. Some of us are carrying that debt more than others. We want liberation and freedom for all and we don’t want to repeat that cycle of enslavement. We don’t want to have this great Jubilee celebration, only to turn around in several generations and to find it’s the same again. Jubilee needs to be permanent!

This has been the Australian experience, particularly in Aboriginal and Torres Strait Islander communities, that there is a cycle of misunderstanding which turns into damaging laws, policies, and procedures. The laws and programs that have been placed upon us in the last 20 years are very similar to the laws that were in previous generations. The Northern Territory intervention, the basics card, the removal of children from Aboriginal and Torres Strait Islander families, the adoption laws that are making it easier for Indigenous kids to be readily adopted by non-indigenous people without reference to kinship or wider community. These are repetitions of oppression that have happened previously and that we’ve had national apologies about and yet they continue.

To see churches and other institutions that were involved in these kinds of activities in the past and to find that they’re actively involved again is a symptom of this cycle. And churches are involved mainly through their agencies. At what stage do we say, the cycle ends here! This Jubilee is the last because we won’t need another Jubilee! We won’t need another Jubilee because we will have actively worked for freedom. There won’t be any more oppression again because we’re done with that. That is my hope.

Naomi Wolfe is a trawloolway woman, and First Peoples Coordinator at the University of Divinity. Naomi encourages a collaborative learning between Aboriginal and non-Aboriginal staff and students at the University to break down barriers destroy stereotypes and to cultivate new relationships based on respect. She has a professional and personal interest in Indigenous cross-cultural training and awareness as well as Indigenous pedagogies and theology.