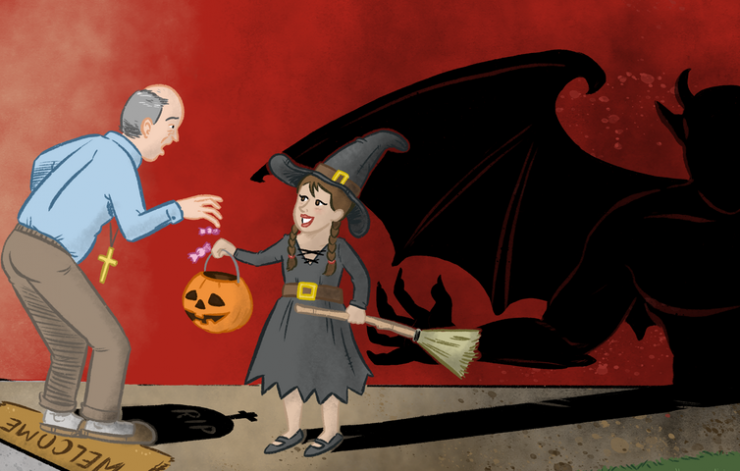 Hell, no! Halloween is not ‘satanic’ – it’s an important way to think about death

Despite the absurdity that a child dressing up as a witch is devil worship, the idea that Halloween is linked to something satanic continues to have purchase among some conservative Christians. However, the traditions behind this increasingly popular holiday are far more complex. It has less to do with anything satanic and more to do with superstition and our relationship with death.

For approximately the past 1,200 years, Halloween has been defined, in part, by the Christian festival celebrated on November 1 each year known as All Saints’ Day or “All Hallows” in old English. “All Hallows Eve” became “Hallowe’en” – the eve of All Saints’ Day.

Read more:
What is hell, exactly? We might joke it’s other people, but the Bible has a more complicated answer

In the Roman Catholic tradition, saints are a specific category: someone recognised for extraordinary faith and service, recognised through a formal canonisation process. However, in the Protestant tradition, “saints” refers more generally to all believers. So All Saints’ Day is time to remember all those who have died, often with a focus on those who have died in the previous year (Catholics, Orthodox Christians and some Anglicans celebrate this larger group on All Souls’ Day).

The point of these Christian festivals is to remember and honour the dead. On All Souls’ Day at the church I attend, we read aloud the names of dead loved ones submitted by attendees. The list can be long, but it can be a deeply moving experience. It is a rare time to name the dead, comfort one another in grief, and keep alive the memories of loved ones by giving thanks for their lives. And this is the connection to the much older traditions that lie behind Halloween.

Honouring the dead takes a range of forms around the world, as it has throughout history. Ancient Romans left gifts on the graves of their ancestors at Feralia to appease the spirits. Mexican customs associated with the Day of the Dead (Dia de Los Muertos) similarly include leaving gifts at graves.

In Australia, the more recent tradition of Anzac Day dawn services and the placement of wreaths on monuments echoes this desire to remember and honour a particular category of those who have died in service to their country.

The Celtic origins of Halloween, known as Samhain, also included gifts for the dead. Out of superstitious concern that the spirits or ghosts of the dead could enter the space of the living on Halloween night and perhaps even take the living with them, Celts wore costumes to disguise themselves from ghosts and burned bonfires to ward off bad spirits. Small bowls of food placed outside homes sought to appease the ghosts. This may well be the origins of the more recent trick-or-treat tradition.

A festival of the dead might seem a strange and ghoulish thing in a culture that is otherwise so death-denying. It stands as a sharp contrast to our modern obsession with anti-ageing, life-extending technology. Yet, despite an ambivalent history with Halloween, it is becoming more popular each year in Australia. Spending on costumes, sweets and decorations has sky-rocketed in recent years.

While the environmental impact of these cheap plastic decorations and individually wrapped candy raises its own set of ethical issues, the relationship between the dead and the living raises a deeper set of questions.

How do we continue to remember the dead? How do we honour and keep alive memories of those who have gone before us? How do we talk about death with our children in a way that makes it less scary yet without denying or trivialising its seriousness?

Divorced from religious traditions of various kinds, we are in danger of being a culture that lacks the rituals that help us pause, remember, give thanks and take stock of both death and life.

Read more:
Halloween films: the good, the bad and the truly scary


In our modern age, we are less likely to be worried about ghosts rising from graves on Halloween. Yet I can’t help but wonder whether the attraction of Halloween is that it taps into a part of our collective psyche that continues to be intrigued by questions about death, the afterlife and the spiritual realm, despite being less likely to practise formal religion.

While very conservative Christians will view anything not explicitly Christian as anti-Christian (and therefore satanic, or “of the devil”), Halloween, like so many other cultural festivals, reflects a complex set of traditions and beliefs. Rather than doing harm, perhaps dressing up like a ghost, zombie, devil, angel or some other undead being is actually a way to celebrate life.

After all, remembering the dead (or dressing up like them) reminds us to be grateful for life.

18 Arab Female Theologians and Christian Leaders You Should Know About