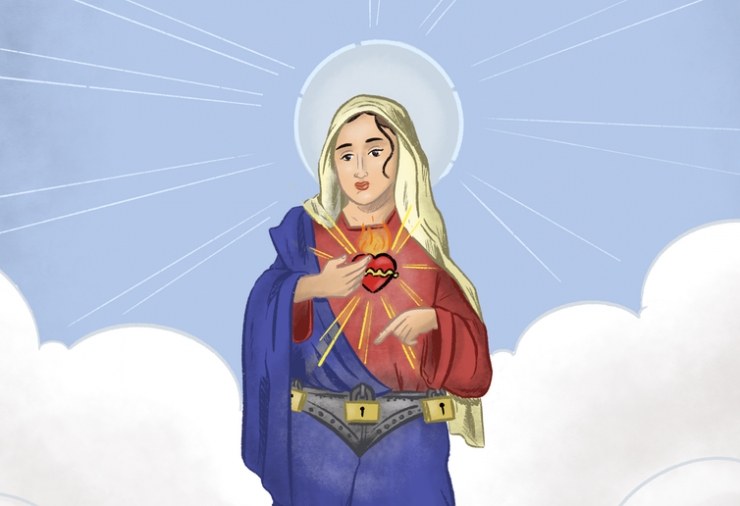 From virgin births to purity movements: Christians and their problem with sex

It took 400 years, but sometime in the early fifth century Christians transformed a tradition about Jesus’s miraculous virgin birth into a doctrine that inextricably connected sex with sin. It has plagued the church ever since, doing untold damage to generations of women in particular.

In its original context, the claim that Jesus was born to a virgin mother places his birth in a long line of miraculous biblical births. The Bible tells of numerous old women, barren women and young unmarried women (“virgins” in ancient terms) who surprisingly bore children. Their offspring were seen as a sign of God’s blessing of new life, often in the midst of suffering or hardship.

Read more:
God made the rainbow: why the Bible welcomes a gender spectrum


The idea of original sin and its connection to sexual intercourse was popularised by African theologian Augustine. Not without controversy at the time, Augustine argued that humans were not born innocent, but rather sinful. His rationale was that sexual intercourse involves lust or sexual desire (a negative for him).

While Augustine tied this “original sin” back to Adam and Eve, the parallel focus on Mary’s perpetual virginity is relevant. If sexual intercourse produces sinful offspring, it was essential Mary be and remain a virgin so Jesus could, uniquely, be born sinless.

Such logic might seem absurd to many modern readers, but Augustine’s influence on Christian tradition cannot be overstated. In her book, Adam, Eve, and the Serpent, Princeton Professor Elaine Pagels argues Augustine has left a legacy of problematic and complicated attitudes towards sex in the Christian tradition.

The idea that Mary was a perpetual virgin was already in circulation at this time, but the influence of Augustine’s thinking on original sin would lead the 19th-century Roman Catholic Church to adopt the doctrine of Immaculate Conception. This was the idea that Mary herself was immaculately conceived, so she could be a sinless vessel to carry the fetal Jesus. This move consolidated the association of purity and virginity, arguably leading to the Protestant Church’s purity culture movement in the 20th century.

The purity movement has its roots in 19th-century social movements that sought to abolish prostitution, raise the age of consent and limit pornography. Often led by women with the intention of protecting women, these movements appealed to men not to misuse their social and sexual power over women. However, the late 20th-century American purity movement looks quite different and has arguably done damage to women.


In the 1990s, conservative American churches started focusing on a radical abstinence from sex, the nature of which would likely have appealed to Augustine. Known as “purity culture,” both men and women were expected to remain “pure”.

Women, however, inevitably bore the brunt of this teaching. Girls pledged their virginity and were given promise rings by their fathers, a placeholder for an engagement ring when their virginity would be promised to another man. Young women were taught that the most important thing they could offer their future husband was a body untouched by another male.

Much has been written about the culture of shame and sexual ignorance that has resulted from such an emphasis on sexual purity. There were two notable outcomes: sex outside of marriage became the worst form of sin and women who experienced sexual assault were often additionally traumatised by their church’s teaching about purity and shame.

The harm caused is now so widely acknowledged that a once vocal proponent of the no-dating purity culture, Joshua Harris, has recently apologised and retracted his views and his book on the topic.

Shame, purity and sexual ignorance continue to haunt Christian communities around the globe. In Melbourne, I have encountered Christians who abstained from anything except holding hands until marriage, only to find that the leap from total abstinence to sex in one night was painful, awkward and sometimes traumatising. If you have been told something is shameful your whole life, it takes more than a wedding ceremony to shift to a sex-positive mindset.

I’ve met Christian women who will not report a childhood rape because they fear being seen as “tainted goods” or “impure” to Christian men who might not want to marry them. The association of sex and sinfulness is so strong for some that a rapist’s sin can be internalised as their own.

Read more:
How the ‘extreme abstinence’ of the purity movement created a sense of shame in evangelical women


In conservative Christian circles, sexual “sins” continue to be considered the worst kinds of sin. This legacy entrenches hierarchical gender roles, can push sexual activity underground as something hidden or secret, and arguably inhibits healthy sexual development in young people. Similarly, it diminishes any robust theology of sin and, alarmingly, it can create dangerous conditions for those vulnerable to sexual predation.

These centuries of thinking about virginity, sex and sinfulness have led us a long way from the woman whose child Christians celebrate at Christmas. Somehow, a virginal young woman became used by men to support claims that sex equals sin.

Yet, in the Christian tradition, Mary is best remembered as mother of God, prophet and faithful follower of Jesus. She has long been upheld as a model of faith for women in particular. And so she should be. Not because she was ever “pure” or remained a virgin, but because she exemplifies courageous faith.