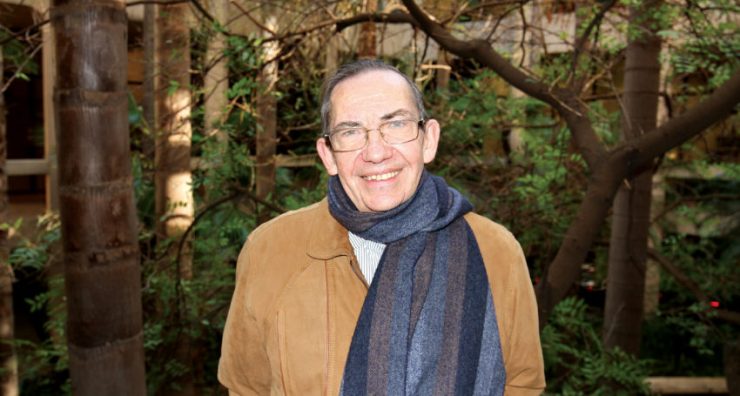 This article is an extract from The Southern Cross. Read the full story here.

With a 40-year career teaching international relations at Latrobe University in Melbourne and a long involvement with the Pax Christi peace movement, Emeritus Professor Camilleri was one of the driving forces behind the recent Earth at Peace Conference, co-hosted by the University of Divinity’s Centre for Religion and Social Policy.

Professor Camilleri was in Adelaide last month to speak at the launch of Just Peace SA.

He said it was not often that the Church had a leader with the depth of understanding of Pope Francis and described his encyclical Laudato Si’ as “just brilliant”. He also praised the Pope’s moves to abandon the principle of “just war” and for being the first to sign the nuclear depository treaty.

“But the Church generally is not taking full advantage of it which is a great shame,” he said.

“I think all Churches in Australia feel a bit under siege, put crudely, they’re in survival mode, so they become introspective … taking on these issues that require skills, learning and education becomes difficult.”

It was rare, he said, for a priest to preach about such matters and he suspected most parishioners would feel “quite comfortable” and find it “unsettling” to be told they were facing “the most challenging period of human history over the last 200,000 years”.

“There is nothing to match it because we are living with existential threats, which threaten the entire planet, and the whole human family … but we don’t seem to be able to rise to the challenge yet,” Professor Camilleri said.

“Some Pacific islands will be under sea within 20 years, no question, even if we stopped climate change tomorrow, which we can’t. We should brace ourselves for tens of thousands of boat people coming here.”

He said justice, peace and care of the earth needed to be treated as “one coherent whole” at a local, national and international level.

God Forbid podcast | What is hell, and does anyone go there?