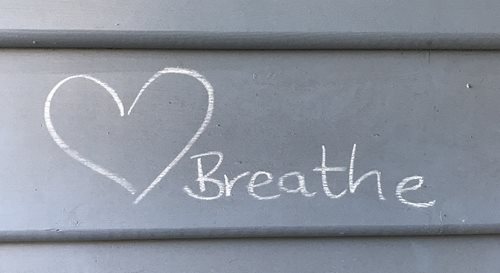 Almost three months ago – when shops had just closed, borders had been shut, and we were beginning to hunker down into an indefinite period of home isolation – my wife, Sonia, chalked a single word on the wall of our house, just outside the front door.

It was a powerful remembrance to us, whenever we passed by, to stop…pause…take a moment…and remind ourselves that, in the words of Julian of Norwich, ‘all shall be well.’ That single word – and the reflective pause encouraged by it – has helped us immeasurably through all the claustrophobic anxieties with which these past 12 weeks have been filled.

Little could we have known three months ago how that single word would, in a slightly different context, reverberate throughout the world so powerfully, from the end of May.

George Floyd’s final words, through which we hear not only his voice but the voices of unnumbered other victims of systemic oppression and injustice, were not those of calm reflection, but of heart-rending desperation.

While the door-post reminder to breathe has been, for us in our family, a symbolic word of hope, the same word has, as a consequence of George Floyd’s murder, become symbolic for many others of countless unfulfilled hopes – an unmistakable reminder that life, for so many people, not least within Australia, has never been without struggle; never been absent the threat of unjust punishment, and early death.

As I have thought about this over these past few days, it has struck me that perhaps part of the mission and witness of the Church is in fact to help people… breathe. Not just to draw breath, but truly to breathe. Not just to take that next gulp of air, as a physiological reflex, but to have the freedom and the time to take those slow, deliberate, thoughtful breaths. To have those times when we can stop…pause…and collect ourselves, before carrying on. If the past fortnight of protest and unrest has taught us anything (at least, if we have been at all teachable), it is that too many people in our world – even, and at times perhaps especially, in the so-called ‘developed world’ – have to spend too much of their time simply struggling for, battling for, the chance just to draw breath, while the rest of us luxuriate in the freedom to slowly, deliberately, thoughtfully…breathe.

George Floyd, Breonna Taylor, Ahmaud Arbery, Dominique Clayton, and at least 431 Australian Indigenous women and men since 1991, lost their struggle for just one more breath. Whereas we had the chance, which perhaps we too frequently squandered, to reflectively, calmly, breathe – they were rendered…breathless.

Certainly, the Church ought to be with and alongside those people and agencies that provide the necessities of life to those who are wanting. But it seems to me that, if we take Jesus seriously – that he came, not just that we might have life, but that we might have it abundantly (John 10:10) – then we should be in the business of helping people, not merely draw breath, but actually to…breathe.

Life should be about more than merely the constant struggle to catch just one more ragged gulp of air. Abundant life is characterized, at least in part, by the freedom and time to slowly, deliberately, thoughtfully…breathe. Until that freedom and that time is extended to all, then the rest of us ought to breathe…restlessly.