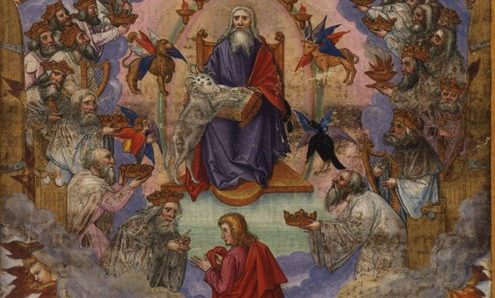 This coming weekend sees that strange, annual concurrence of diverse Christian remembrances. On Sunday 31 October, many Protestant Christians around the world will celebrate Reformation Day, and will recall with thanks the evangelical insights with which Martin Luther helped repair the Church after centuries of theological and political corruption. On the same day, a great many others – both Christians and not – will celebrate All Hallows’ Eve, better know these days as Halloween. The first in the Hallowtide triduum – which includes also All Saints’ Day and All Souls’ Day – Halloween would appear at first glance to be an odd companion to the Luther-inspired Reformation Day. After all, weren’t commemorations for the dead chief amongst those things that the 16th century reformers attacked as ‘popish’ abominations? Indeed, between 1549 and 1552, Thomas Cranmer successfully eliminated all intercessions for the departed, in successive editions of his Book of Common Prayer. How ironic, then, that Luther – and the reforms he ushered in – should be celebrated on the same day that we celebrate something that he so vehemently opposed.

And yet, there is something precious that binds the two commemorations together, and that also offers considerable comfort to us in a world that has become dangerously segregated.

Martin Luther, and many of the reformers who came after him – people like Huldrych Zwingli, John Calvin, and Martin Bucer – were insistent that what lent authority to their views was that they stood firmly in the line of the apostles and Fathers. Unlike the alleged ‘novelties’ of Roman dogma, the reformers’ theologies were, they argued, justified by their ancient heritage. Neither Luther nor Zwingli, Cranmer nor Calvin, believed themselves to be proclaiming anything other than the faith of the ancient Church. They stood in solidarity with those faithful teachers who had gone before them – Paul, Cyprian, Augustine…

Similarly, the commemoration of All Hallows – that is, ‘all the saints’ – to which Halloween is the prelude, is also a thanks-filled remembrance of this solidarity. As the ‘Introduction to the Season’ in the Church of England’s Common Worship puts it, ‘No Christian is solitary. Through baptism we become members one of another in Christ, members of a company of saints whose mutual belonging transcends death…[The Hallowtide triduum] celebrates this mutual belonging.’

Thus, despite their apparent mutual incongruity, Reformation Day and Halloween together affirm that timeless togetherness that characterizes the community of God.

Such togetherness, it seems to me, is more necessary to affirm now than it ever has been. In an age of increasingly bitter political enmities and divisions; in an age in which the COVID pandemic has isolated us from one another; and in an age in which we are at risk of using our vaccination status as a means of segregating ourselves even further…we are well served by the reminder that is provided to us by both Reformation Day and Halloween. For these two commemorations, in their ironic confluence, remind us that we are called to be, and in fact are, one; a oneness and a solidarity that are neither destroyed but rather transcended by death and the passing of the generations.

And so, as you observe the pumpkins and skeletons that will adorn windows and doors this weekend, or perhaps as you sing Luther’s Ein feste Burg at church on Sunday – think of them not so much as representing opposing ideas, but as in fact pointing to a common truth: that in Christ we live in solidarity both with those who have gone before us, and thus also with those with whom we share this present generation.