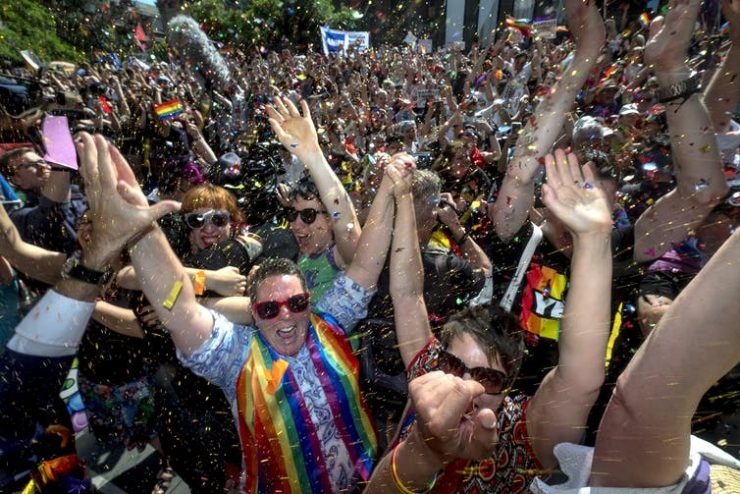 A year since the marriage equality vote, much has been gained – and there is still much to be done

November 15, 2018 is the one-year anniversary of Australians voting “yes” to marriage equality. The survey was an unprecedented two-month exercise in engaging with current Australian community values around sexuality and relationships.

The survey returned a clear result, with 61.6% in favour of allowing same-sex couples to marry. Legislation recognising marriage equality passed into law on December 8.

In the six months after the legislation passed, almost 2,500 same-sex couples were married. That’s about 100 gay weddings a week.

Read more:
The postal survey is both bizarre and typical in the history of Western marriage

we’ve been together now for 49 years and eight months. And so it just seemed a little artificial. It seemed a little late for the confetti. And it also seemed to us a little bit patriarchal… (but) we’ve ultimately decided that we are going to get married.

For very many LGBT people, the postal survey was a deeply traumatic time. Many still live with the ongoing grief of having had the dignity of their lives, and those of their children, up for debate.

A soon to be released collection of queer writing from the marriage equality survey period provides a sensitive and beautiful document of that experience (including a piece of mine).

But the passage of marriage equality legislation was not the end of this episode in our history. Our communities are still healing after the bruising campaign, and its aftermath has exposed a legal and social landscape in which the human rights of LGBT people are still not adequately valued and respected.

In what was presented at the time as a conciliatory gesture to the religious right, then Prime Minister Malcolm Turnbull convened an expert panel to “examine whether Australian law adequately protects the human right to freedom of religion”.

Australians were surprised and outraged to discover that, in most Australian jurisdictions, religious schools are permitted to expel students and fire teachers for the simple fact of their sexuality or gender identity. This is the case even if those students or teachers are people of faith and living in accordance with the tenets of their church.

When we launched the report of our three year study of LGBT conversion therapy last month, people were similarly surprised and horrified. These harmful and discredited practices – futile attempts to make LGBT people straight and cisgendered – are still present in many Australian religious communities, and remain legal.


Perhaps this moment of realisation of the magnitude of discrimination and harms that the law in Australia still permits is one of the most important outcomes of the marriage equality postal survey.

This recognition of the dignity and humanity of LGBT people has brought forward debate about the law in regard to religion and sex. Made aware of the ways current law permits religious bodies to discriminate on the basis of sex, the majority of Australians recognise the state of the law does not reflect their values.

It’s time to renegotiate the balance of rights between the protection of LGBT people from discrimination and the permission we give people of faith to discriminate on the basis of sex.

And this might not be a bad thing for religion in Australia. Religious communities might need to reflect on why they are so obsessed with sex. Sexual values are not present in any of the founding creeds of Australia’s major religions. And there is no consistent view in any religion regarding teachings about gender and sexuality.

A recent study on Faith and Belief in Australia showed only 20% of Australians are actively involved in religion. It also found the biggest block (31%) to Australians engaging with Christianity was the churches’ teaching and stance on homosexuality.