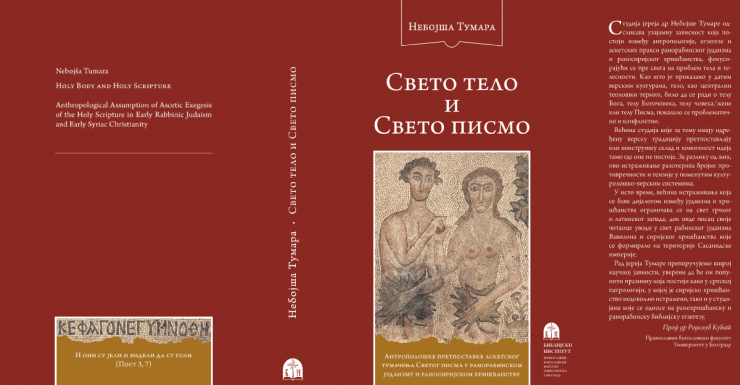 Congratulations to Fr Dr Nebojsa Tumara on the publication of his new book Holy Body and Holy Scripture: Anthropological Assumptions of Ascetic Exegesis of the Holy Scripture in Early Rabbinic Judaism and Early Syriac Christianity which has been published by the Biblical Institute, Faculty of Orthodox Theology, at the University of Belgrade.

The book focuses on the dialogue/encounter/conflict between Jews and Christians in the period of the Late Antiquity, investigating the process of parting the ways between Judaism and Christianity, the formation of elements that define a religious system, and the circulation/exchange of the religious symbols between these systems.

At the same time, the book examines the ascetic imperative in both religious traditions and presents how it influenced the hermeneutical strategies of both parties. It also examines the role of Sage who, as a religious authority and spiritual master, from one side, represents the Scriptures, and from the other is considered to be a channel through which holiness, as well as the meaning of the text, are induced in the community of believers.

The Interpretations of the Theotokias by the Patriarch John ibn Qiddis