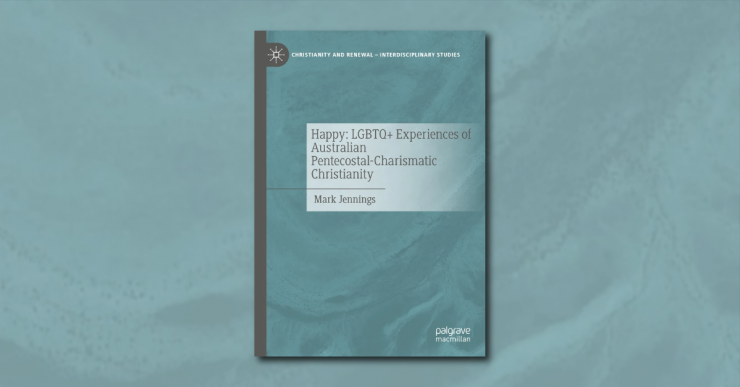 Happy relates the unique experiences of Lesbian, Gay, Bisexual, Transgender and Queer/Questioning (LGBTQ+) people in Australian Pentecostal-Charismatic Christian churches. Grounded in the theoretical contributions of Michel Foucault, Judith Butler, Lewis Coser, and others, the book exposes the discursive ‘battleground’ over the ‘truth’ of sex which underlies the participants’ stories. These rich and complex narratives reveal the stakes of this conflict, manifested in ‘the line’ – a barrier restricting out LGBTQ+ people from full participation in ministry and service. Although some participants related stories of supportive—if typically conservative—congregations where they felt able to live out an authentic, integrated faith, others found they could only leave their formerly close and supportive communities behind, ‘counter-rejecting’ the churches and often the faith that they felt had rejected them.

“Happy pits the irresistible force of individual desire against the immovable object of institutional power. With a head for critical theory and a heart for people’s stories and spiritual journeys, Mark Jennings has written one of the most important social scientific studies of contemporary Christianity in many years.” (Ibrahim Abraham, Australian National University, author of Evangelical Youth Culture)

“Jennings blends effortlessly an insightful and creative theoretical framework with carefully interpreted stories of the queer Pentecostal-Charismatic Christians he has interviewed. The result is a powerful book that brings the struggle of two worlds in conflict to life, engaging the reader in the at times painful and deeply moving experiences. Jennings takes the reader through the spectrum of responses, from self-doubt and existential crisis to conciliation and gratitude. Always finely researched and richly interpreted, this book can be a useful tool for queer religious people, religious leaders who wish to understand better the their queer adherents, and scholars alike.” (Bronwyn Fielder, University of Tasmania, co-author of Lesbian, Gay, Bisexual and Transgender Christians: Queer Christians, Authentic Selves.’)

“At a time when many different church cultures are grappling with questions about sexuality, equality, and evolving views on these questions, this book will resonate with church leadership, LGBTQ church members, and those who have left churches over these issues and experiences. Very timely indeed!” (Linda Ambrose, Laurentian University, Canada)

“Pentecostalism has been in the spotlight since Scott Morrison’s ascendancy to Prime Minister of Australia. Critics are aplenty, and the movement is an easy target, especially since the implosion of Hillsong, its most prominent representative. Mark Jennings might be seen as just another critic, but his work is unique. It brings a deep and studied knowledge of global and Australian Pentecostalism, its inclusive potential and violent growth-focused evangelical present, into dialogue with the experiences of LGBTQ+ people who have struggled as transgressors under its transformative message. He tells the story of an unfinished war between Pentecostals with institutional power and faithful LGBTQI+ people that the church has victimised but who are not mere victims, but agents of transformation. This is a must-read book by anyone interested in Pentecostalism and the trauma and strength of queer people trying to navigate religious rejection.” (Shane Clifton, Honorary Associate, Centre for Disability Studies, the University of Sydney, Australia)

“What is it like to grow up in a church that says you shouldn’t exist, or demands you suppress important parts of yourself? Why would anyone stay in such an environment — and what happens if you leave? (Not necessarily what you’d expect!) Pentecostal-Charismatic Christianity is a significant and growing part of Australia’s religious landscape, but remains mysterious to many outside its enclaves. Mark Jennings’s combination of remarkable interviews and insightful analysis not only illuminates current rumblings over gender and sexual identity within these churches, but, in the process, gives readers from outside a glimpse into a world with a distinctive language, culture and ethos.” (Marion Maddox, Honorary Professor, Department of Politics and International Relations, Macquarie University, Australia)

Mark Jennings is Senior Lecturer in Religious Studies at Wollaston Theological College in Perth, Western Australia, and the Continuing Education Coordinator for the Anglican Diocese of Perth.