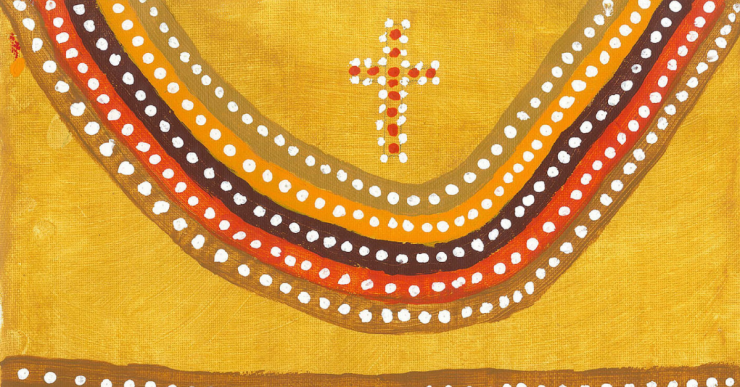 This article is reposted from MelbourneCatholic.org

Australia’s oldest and largest theological school, the University of Divinity, will at the end of 2021 launch a new Indigenous Studies Centre. Through the Centre, the University’s students, graduates, teachers and researchers (whether Indigenous or not) will be encouraged to form a relationship with Christ that grows from the imaginative roots of the world’s oldest living culture.

This vision gestated over many years through conversations between local and international Christian leaders, both Indigenous and white. Recognising that most Australian theological activity has been generated by white people, the Centre will deliberately seek to both decolonise Christian traditions and to engage them anew, beginning with a uniquely Indigenous sense of relationship with country, waterway and sky.

Trawloolway man and Anglican Reverend Dr Garry Deverell, who is the Vice-Chancellor’s Fellow in Indigenous Theologies at the University of Divinity, noted that Australian theological colleges and seminaries were often run by white people for white people, and that their curricula invariably reflected this fact.

‘More recently, of course, there has been a welcome influx of recent migrants into Australian theological schools and a subsequent expansion of consciousness about the mission of the church,’ said Dr Deverell.

‘Some schools have even employed people of colour as tenured lecturers. But it remains the case, to this day, that no Australian theological college has ever employed an Aboriginal or Torres Strait Islander theologian to teach tertiary-level theology in a secure and tenured position.’

Dr Deverell says that the Indigenous Studies Centre aspires to change all that.

Dr Deverell says that the last couple of years of teaching theological studies from Indigenous perspectives has thrown open the windows for Indigenous students, and that ‘theology in Australia is finally beginning to engage our own ways of imagining the life of God amongst us.’

‘Non-Indigenous students report that their perspectives on God and faith have been fundamentally transformed, even revolutionised, in the most positive ways possible,’ he shares.

Professor Gabrielle McMullen AM, Deputy Chancellor of the University of Divinity, highlighted the significance of Aboriginal and Torres Strait Islander theologians informing Christian theologies in the Australian context.

‘The University of Divinity is fostering a pioneering endeavour in the establishment of the Centre for Indigenous Studies,’ said Prof. McMullen.

‘Importantly, Dr Deverell, Ms Naomi Wolfe and I have been in dialogue with Ms Sherry Balcombe of Aboriginal Catholic Ministry Melbourne who warmly welcomes this development of Indigenous theologians and theologies.

‘The University has been heartened by support for the establishment of the Centre, including donations.’

Dr Deverell hopes that the Centre will be able to lead both church and academy into a theological journey which he says will be “genuinely Australian”.

‘My colleague Naomi and I are privileged to have been appointed by the University Council to establish the Centre,’ said Dr Deverell. ‘We hope that Christian people of good will from all our churches will both support and learn from us.’