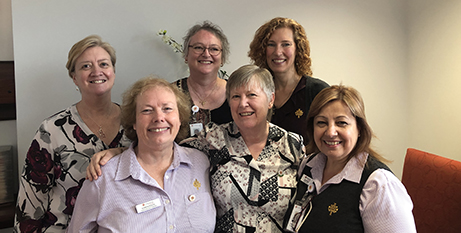 This article is reposted from CathNews. The team includes two students from Yarra Theological Union.

The pastoral care team at St John of God Berwick Hospital in Melbourne’s southeast has been named the winner of the national 2020 Best of Care Team Award by Spiritual Care Australia.

The team received the award from Australia’s peak spiritual care body for their efforts in transitioning from a 75-bed facility to a 202-bed, state of the art hospital in 2018, all while maintaining strong support for both patients and caregivers.

Initially small but effective, the pastoral care team embraced the level of change management required in order to expand the service into the new hospital. This included incorporating new team members and initiating solutions to service the expanded clinical services within the new and much larger facility. The workforce expanded rapidly and many of the new caregivers were unfamiliar with pastoral care, having never worked with an integrated service of its type in previous workplaces. Pastoral care quickly embedded themselves as a vital and valued part of the hospital’s care offering.

Rhonda O’Connor, Director of Mission Integration at St John of God South East Melbourne Hospitals, said she was proud of how the pastoral care team was able to flourish and become an integral part of hospital’s clinical care in a period of immense change.

The award was announced on Monday at SCA’s Annual General Meeting, which took place remotely this year.

The gift of patience