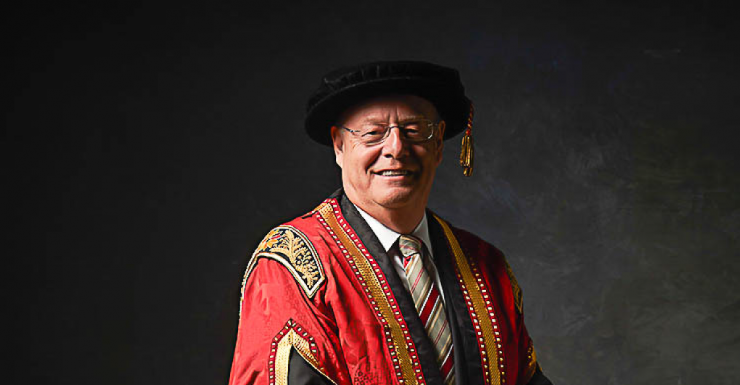 The Council of the University of Divinity has reappointed Dr Graeme L. Blackman AO as Chancellor for a further term of three years until December 2023.

Dr Blackman was appointed inaugural Chancellor of the University in 2011 and has served in the role since 1 January 2012.

Dr Blackman’s dedication to the University has been exceptional. Whether presiding at Graduation ceremonies, encouraging staff and students, representing the University, or chairing Council meetings, Graeme has provided outstanding leadership and commitment to the University’s unique vision and mission. Although the position of Chancellor is an honorary one, Graeme has consistently made himself available to support the Council members and senior executive staff.”

Dr Blackman described one of the highlights of his role as Chancellor as leading the ceremonial aspects of university life. Since 2012 he has personally awarded more than 3,500 degrees, diplomas and certificates to graduating students, and oversaw the creation of the University Mace which is used at formal ceremonies to mark the presence of governing authority.

Dr Blackman brings a wealth of experience to the role of Chancellor. An alumnus of the University of Divinity, having graduated with a Bachelor of Divinity and Master of Theology by research, he has combined his considerable experience in financial management and governance with theological insight, to benefit not only the University but also many other organisations. He has served as Chairman of numerous boards including Anglicare Victoria, Leading Age Services Australia (LASA) and the National Stem Cell Foundation of Australia. Dr Blackman is widely known for his professional leadership in the development of Australia’s pharmaceutical and biotech industry.

In 2017, Dr Blackman was appointed an Officer of the Order of Australia. He received the honour for distinguished service to the pharmaceutical industry, to scientific research and development, to theological education and the Anglican Church of Australia, and to aged care.