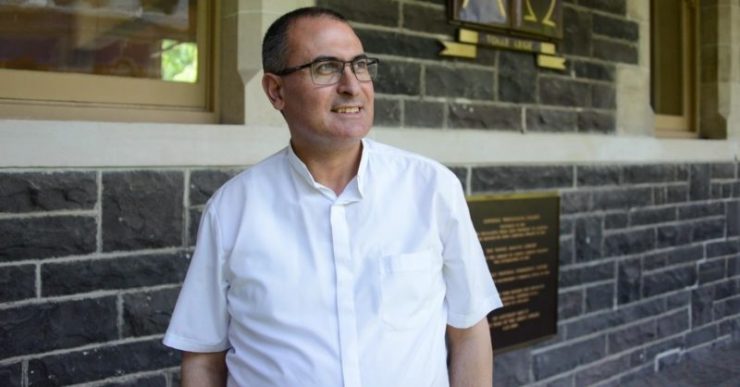 The historical and cultural contribution of Melbourne’s first Catholic Archbishop, James Alipius Goold (1812-1886) has come to life again in a new book, The Architecture of Devotion: James Goold and His Legacies in Colonial Melbourne. This is the second of two volumes that have been edited by Prof. Jaynie Anderson, Dr Fr Max Vodola and Mr Shane Carmody, the first being The Invention of Melbourne: A Baroque Archbishop and a Gothic Architect published in 2019.

Goold arrived in Australia in 1847 as Melbourne’s first bishop and died in 1886, ‘which is a very long episcopate,’ said Fr Max. ‘He was a young Irishman, an Augustinian, who became a Catholic Archbishop right from the infancy of a colonial outpost to the development of this international metropolitan city – when he arrived in Melbourne it was a two-horse town, there were three Catholic churches and the whole of Victoria was his diocese.

With funds from the gold rush, he contributed mightily to the culture of the city through the building of architecture, through establishing orders to provide education, and through his extensive book and artwork collections. By the time of the 1860s and 70s, Melbourne had developed into an international metropolis.

‘We have come to learn so much about him and his leadership role in shaping the city of Melbourne, and more broadly Victoria, because he travelled extensively during his time as Archbishop. He had a tremendous knowledge of the development of suburban Melbourne, and country Victoria.’

Fr Max explained that this latest book is part of ‘a bigger Goold project’ that was made possible due to a commonwealth grant from the Australian Research Council (ARC) in 2016. Retired Art Historian Prof. Jaynie Anderson and Shane Carmody, who has worked in state libraries and public records, believed there was much to uncover and share about Goold and his social and cultural influence on colonial Melbourne and Victoria.

They reached out to Fr Max given his expertise in Australian church history – Fr Max lectures in Australian church history at Catholic Theological College and is also Chair of the Melbourne Diocesan Historical Commission within the Archdiocese. Together they put in an application to the ARC, which is highly competitive, and were awarded a grant of $250,000 for their research project.

‘In applying for the grant, we had to show that our project would advance new knowledge in Australian history, cultural history or religious history,’ said Fr Max. ‘Jaynie and Shane had the idea originally. They thought Goold was a much-underestimated character and as time went on, they were convinced more and more that we had something unique and significant to share.

‘Those of us working around St Patrick’s Cathedral knew Goold was significant, particularly when you see all of the artwork he collected and placed around the cathedral and other places, but Jaynie and Shane were saying, “You have stuff here that’s actually bigger, more valuable, and historically significant compared to other bishops around Australia”.

‘So, between the artwork, the book collection, the historical background of Goold and who he was, the transformation of Melbourne from a provincial outpost to a major international city with the gold rush and Goold’s leadership throughout all of this, we came to understand that we had something important to share.

We started to see Goold from all different sorts of angles and could see that he is actually not like any other colonial bishop of the time. Rather, there’s something quite distinctive about him. So that was the basis of the grant, which led to the launch of the project. We aimed to investigate all of these different aspects of Goold’s background, influence and contribution to the life of Melbourne and Victoria.’

As part of the research project, the three researchers decided to hold a conference on Goold in 2018. The conference invited speakers to present on the various aspects of Goold’s life ‘to build a history and deeper picture of Melbourne’.

‘Those who attended the conference were an eclectic group interested in religious history, architectural history, cultural history, books and art,’ said Fr Max. The Invention of Melbourne: A Baroque Archbishop and a Gothic Architect is an edited collection of the papers presented at the conference published by Melbourne University Press.

‘It’s not just another history book of papers from a conference with the occasional photo here and there,’ said Fr Max, ‘It’s been beautifully produced, sumptuously photographed and all of the images are just so interesting; people actually want to delve into it. And Volume II has been created in that same beautiful style. The themes flow on and are further developed from the first book.’

Fr Max said, ‘Both volumes demonstrate to the research council and Commonwealth that we have developed new knowledge about this man, the distinctiveness of Goold, his background and early Melbourne. We’re showing that Goold is a unique character amongst colonial bishops of the time, because, aided by the gold rush, he had lots of extra money that he used to build churches and schools, and to buy artworks and books, all of which have contributed to the richness of the social fabric of Melbourne.’

As part of the grant, the researchers held a public exhibition at the Old Treasury Building Museum in Melbourne’s CBD between July 2019 to March 2020. ‘Given the Old Treasury Building Museum is down the road from St Patrick’s Cathedral, it’s an exhibition space, it demonstrates the wealth of Melbourne post-gold rush and it’s of the same time that Goold was bishop and that the Cathedral was built, it made sense to have the exhibition there,’ said Fr Max. ‘We were thrilled when they said they’d love to have an exhibition there as we wanted to use the public funds to host a public exhibition that was open to all.

‘We had all sorts of things that belonged to Goold on display – pictures, books, artworks – and we developed timelines, too. When the public came in, whether Catholic or not, they could get a good sense of the importance of the architectural history of Goold and Wardell and their influence on the life and development of the city and colonial Victoria.’ About 40,000 people came through the exhibition space.

There was a real sense that Goold reached out to the broader public, and not just his own Catholic denomination,’ said Fr Max. ‘We get a sense of this city and state thriving and developing and that the various religious communities had a big part to play in that. And Goold particularly was a man who contributed to the fine architectural history of Melbourne, and he also lent his artwork to public art galleries and exhibitions.’

A final conference on Goold in 2019, and the recently published second volume now brings the research project to an end. ‘The two books have similar themes, but the second one picks up new things and further developments from the first volume,’ said Fr Max. The editors dedicated the book to archivist and museum manager, Rachel Naughton, who this year celebrates 25 years in her role.

‘We can do all this because the Archdiocese has conserved all the records, and the memorabilia, and the vestments, and so forth,’ said Fr Max. ‘So, to recognise her work, and the work of the Historical Commission, in terms of maintaining and preserving the cultural patrimony of the diocese, was important. It’s enabled us to have the conferences and publish the books, and all the lovely photographs, and paintings and vestments. This is all part of the cultural history, cultural patrimony of the diocese, which as we’ve seen through Goold, has had a wider impact on the city of Melbourne and Victoria.’

Fr Max and the editors don’t have immediate plans for any further research projects, although he hopes someone will take on the job of writing a biography on Archbishop Goold one day.

‘I was hoping that, because of this research, we could have started a new biography of Goold, but COVID-19 smashed that plan,’ he said. ‘There are a number of books on Archbishop Daniel Mannix and one on Archbishop Tom Carr, but none on Goold. If anyone wanted to build on what we’ve done to write the biography, I’d really love to see something on “Goold, the man”.

‘We’ve really come to understand how significant and important he’s been to the life and development of the city of Melbourne, which we enjoy today.’

People are welcome to explore The Goold Museum, which can be accessed via 383 Albert Street, East Melbourne. Contact Rachel Naughton, Archivist and Museum Manager, on (03) 9926 5677 to organise your visit.

The Mannix Library of Catholic Theological College is located at 278 Victoria Street, East Melbourne, and features the ‘Goold Special Collection’, which is made up of engravings, lithographs, woodcuts and illustrated book material ranging from the sixteenth to the nineteenth century.

Fiona Basile is a freelance writer and photographer. She is a regular contributor to Melbourne Catholic

KOINONIA – The News of SAC