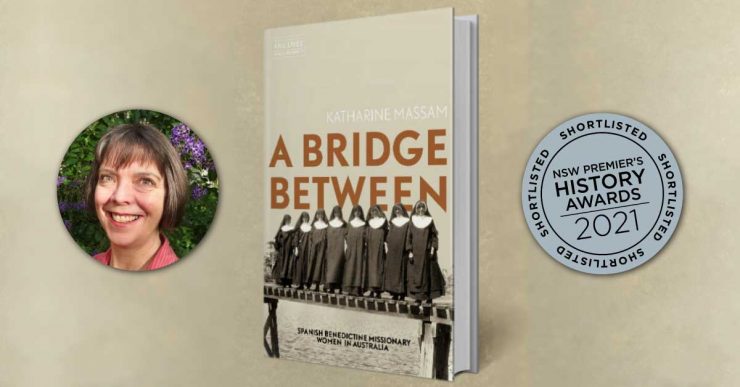 A Bridge Between shortlisted for national prize in Australian History

Congratulations to Associate Professor Katharine Massam on her book A Bridge Between: Spanish Benedictine Missionary Women in Australia being shortlisted for a national prize in Australian History – the NSW Premier’s History Awards.

Katharine’s book is one of only three shortlisted for the award. On hearing of the shortlisting, she said:

There is a lot of good and innovative work being done in Australian history. In the past [this award has] recognised work I admire a lot – including books by Meredith Lake, Chrstina Twomey, Mark McKenna, Ken Inglis.

It’s great news and an honour to be in the excellent company of Grace Karskens and Luke Stegemann on this short ‘shortlist’.”

The NSW Premier’s History Awards were established in 1997 to “honour distinguished achievements in history by Australian citizens and permanent residents” and are held annually. Work published in the previous year is assessed by a panel of judges to encourage good standards in historical research and publishing and to promote history as a significant dimension of a healthy society.


A Bridge Between: Spanish Benedictine Missionary Women in Australia is focussed on a community of mostly Spanish women who worked with First Nations women and girls through most of the twentieth century at the edge of the wheat-belt in Western Australia. The Benedictine mission of New Norcia has had some profile in Australian histories of religion since the days of the founder Rosendo Salvado but the role of women in the town hasn’t been visible in the written histories until now.

Tracing the all-but-forgotten story of the community of Benedictine women who were central to the experience of the mission for many Aboriginal families in the twentieth century both at New Norcia and in the Kimberley, has been a privilege. I knew from the outset that it was a complex story, and that it was distinct from the even more complex story of the institutions they ran. I hope it lays a foundation for further work by First Nations historians. It draws on a very fragmented set of sources to tell a neglected story.”

Apart from what’s detailed in the 400 or so pages, I’ve learnt (again and again) that research depends in so many ways on relationships. This book has three key stakeholders: the Aboriginal Corporation of New Norcia, especially the women who organised the reunion with the surviving Spanish sisters in 2001 and Sister Veronica Willaway of the Yued-Noongar who joined the community in the late 1950s who wrote a foreword for the book; then also the Benedictine community of New Norcia that holds correspondence and other records, and the Tutzing Benedictines – a community the Spanish sisters become part of in the mid-1980s. I’ve also learnt that time is an important resource in research. Sometimes running out of it helps to clarify things. More often, at least in this project, having time to talk to people over several years and to piece things together slowly made all the difference. It’s a book about listening, and how we can listen well, to complex stories.

When asked what was the best thing about the shortlisting, Katharine responded:

Three things that connect I think: the recognition that there’s a story here worth telling and worth listening to. It’s a project that presses on some of the most demanding issues in Australian history – race, class, gender, all in a crucible of religious commitment. It’s a project that could easily be misunderstood or stereotyped. The affirmation means this story is more firmly ‘embedded’ in a wider narratives -nationally and internationally.

And then, it’s a strong reminder of the network of people who’ve been part of the process. ‘It takes a village’ to make a book. The UD has been part of that process too, in conversations with colleagues and practical support in all sorts of ways. As the acknowledgements say, long term research projects like this are a rare privilege in contemporary academia.

Linked to that, it’s a thrill that ANU Press the publisher is entirely open access. So, if the shortlisting brings the work into public view and people are interested, the pdf and other e-editions are free to download. The print copies are affordable too.

Access the e-edition (free) or order a print copy online from the ANU Press website:
A Bridge Between: Spanish Benedictine Missionary Women in Australia