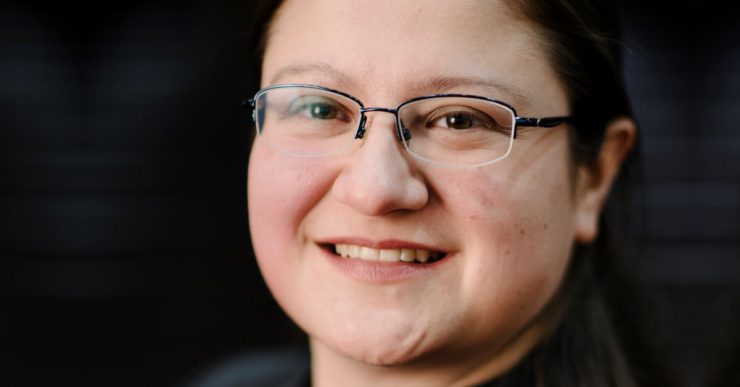 Elizabeth Murray admits that many others saw her leadership potential before she did, and she’s now thankful that she listened to her supporters, and her eventual calling towards ordination.

Timing is everything, and for Elizabeth Murray – Vicar at Holy Trinity Church Williamstown – this was certainly the case when it came to finding her true calling. Elizabeth always seemed destined for a role within the Anglican Church – it just took some time to figure out what her ideal role was.

The self-confessed ‘church-geek’ worked in parish administration, as an academic tutor at the University of Divinity’s United Faculty of Theology, as a research assistant to the Vice-Chancellor at the University of Divinity and at the Australian Hymn Book Company before a conversation with Trinity College Theological School faculty member the Revd Canon Professor Dorothy Lee steered her towards ordination.

The daughter of two public high-school teachers, Elizabeth grew up going to church and has long been part of a faith community.

In 2004, Elizabeth was completing her undergraduate degree in arts and science, then Honours (in history) at the University of Melbourne, and at the same time her dad was undertaking studies at Trinity College Theological School ahead of his ordination as a minister in 2005. Religion was always a part of life ‘but not in the way everyone assumes it is when they hear my dad’s a priest,’ Elizabeth says, ‘I have to point out that [my father became a priest] when I was an adult.’

It was during her father’s time at Trinity that Elizabeth became acquainted with the College.

‘I often came to College after my day had ended and joined the theology students for socialising, drinks and nibbles… I knew the community and they seemed like a great bunch. I loved sharing in the stories of those who were on the path to ordination, and their stories of how they came to realise their sense of calling. So, even though I didn’t feel a call to ordained ministry at that time, being part of their journey appealed, and being part of that supportive student environment appealed a lot.’

It wasn’t until 2012 – following completion of a Master of Arts (including a one-year graduate diploma in theology), participating in Trinity College Theological School’s ministry formation program and many jobs in the church in between – that Elizabeth found her calling.

It was Good Friday and Dorothy Lee was a guest preacher at St Mary’s in North Melbourne, and had approach Elizabeth afterwards. ‘[Dorothy] said “The Archbishop asked us to think about people we know who should be pursuing ordained ministry, and you’re one of two people I know who would be an excellent priest.”’

Elizabeth had been asked many times before whether she was interested in becoming a minister but had always responded that she didn’t feel the calling. This time was different, however, and Elizabeth says she could no longer ignore the niggling feeling that ordained ministry was what she should be doing.

At this point, it seems Elizabeth had finally realised what everyone else had seen. She was destined for ministry.

‘The general response was, “Well, it’s about time you realised that’s what you’re meant to be doing. We’ve all seen it forever.”’ In 2013, Elizabeth received a non-residential Pitcher scholarship from Trinity College Theological School, was accepted as a candidate for ordination in 2014 and graduated with a Bachelor of Theology in 2016.

After ordination and following almost two years at Parish of the Parks in Albert Park as a part-time curate and two years as a full-time curate at St John’s in Toorak, Elizabeth was appointed by the Archbishop as the parish priest in Williamstown at the beginning of 2020 – just before church services were suspended due to COVID restrictions.

‘It has been an interesting way to be introduced to a new faith community … not quite in the way that I had envisaged,’ Elizabeth says. ‘But we’ve all muddled through it in our way … each community and ministry team can only do what they can do. I think everyone’s doing their absolute best.’