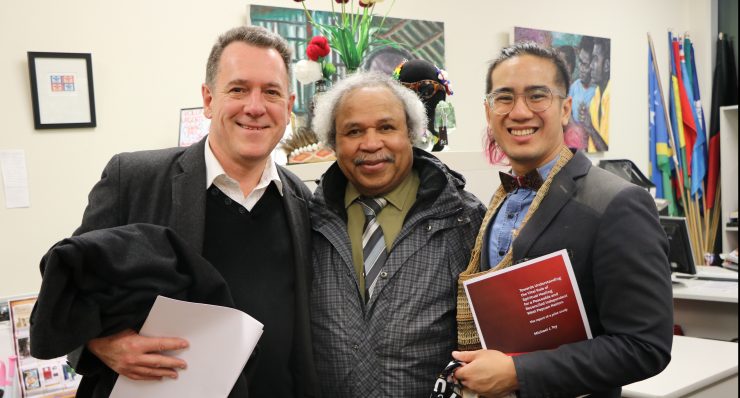 The escalating violence in West Papua has given added urgency to the first research report completed for the Federal Republic of West Papua (FRWP) Foreign Embassy by the Centre for Religion and Social Policy (RASP). The report was recently handed to Mr Jacob Rumbiak, Minister for Foreign Affairs of the Federal Republic of West Papua and Ms Babuan Mirino, President of its Women’s Office, by RASP Director, Reverend Dr Gordon Preece at the Minister’s Melbourne Docklands office.

Titled Towards Understanding the Vital Role of Spiritual Healing for a Peaceable and Reconciled Independent West Papuan Nation: the report of a pilot study, the research reports on the potential role of spiritual healing for West Papuan victims of violence from their country’s foreign occupation.

Speaking at the ceremony, Dr Preece thanked the Minister and Women’s Office President for their commission and trust in RASP to carry out this important first piece of research.  ‘We are grateful for the opportunity to support your commitment to bringing the Christian faith of your people to the heart of your struggle for healing, justice and a peaceable future’, Dr Preece said.  He noted that the research identified the important challenge of reconciling traditional cultural beliefs with the Christian heritage brought to the people by the 19th-century missionary movement.

Dr Preece also paid tribute to RASP’s honorary researcher, Michael Toy, who had studied in detail a series of audio recordings that debriefed the reflections of an ‘Anglo’ spiritual healer in West Papua.  The healer had then delivered his material to the FRWP for analysis.  ‘Michael has brought an astute theological ear to his listening to this complex material, and with the aid of a solid literature review and the support of a project reference group, has helped RASP take an important first step in sensitively responding to the FRWP research commission,’ the Director added.  Dr. Preece reminded the gathering that this project was the first of three projects RASP is commissioned to carry out for the FRWP, and suggested that the spiritual healing study had also opened the door on the need for further research in this field.

Michael Toy thanked the members of the project reference group, especially the expatriate West Papuans, for their invaluable contribution to the project’s understanding of the power of the spirits in West Papuan culture.  Michael also thanked the office staff and West Papuan leaders for their hospitality in welcoming him into their struggle, as well as the Director and RASP’s project coordinator, Rev. John Bottomley, for his assistance in the organisation and guidance of the research.

The formal part of the evening concluded with the West Papuan people offering a rousing rendition of a national song, and inviting all those present to take part in further hospitality of a shared supper.  This was a wonderful opportunity to make new friends and reflect on the importance for what the FRWP participants described as an historic occasion.