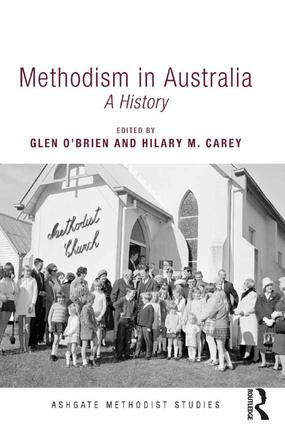 “Methodism has played a major role in all areas of public life in Australia but has been particularly significant for its influence on education, social welfare, missions to Aboriginal people and the Pacific Islands and the role of women. Drawing together a team of historical experts, Methodism in Australia presents a critical introduction to one of the most important religious movements in Australia’s settlement history and beyond. Offering ground-breaking regional studies of the development of Methodism, this book considers a broad range of issues including Australian Methodist religious experience, worship and music, Methodist intellectuals, and missions to Australia and the Pacific.

Associate Professor Glen O’Brien is Research Coordinator at Eva Burrows College, University of Divinity. He is a Research Fellow of the Australasian Centre for Wesleyan Research and an Honorary Fellow of the Manchester Wesley Research Centre. He has published widely on Wesleyan and Methodist themes and engaged in post-doctoral research at Duke University, Asbury Theological Seminary, and Oxford Brookes University. In 2013 he served as a Member of the 13th Oxford Institute for Methodist Theological Studies.